They came from Cape Cod and Kansas City, even as far away as California. They brought posters and flags, decked out in jerseys, beads and face paint. These were the little girls — and boys — that came to Lower Manhattan to catch a glimpse at the United States women’s national soccer team.

For the second time in four years, the team was honored with a ticker-tape parade down the Canyon of Heroes on Wednesday after winning the Women’s World Cup, this time in France on Sunday.

It wasn’t just young girls cherishing their success this year, it was an entire generation of soccer players and sports fans. One of the more lasting effects of this team may be its appeal across gender lines, seemingly obliterating whatever remained of the anachronistic tendency of boys and men to resist rooting for women’s teams.

“Watching them is fun and they are very inspiring,” said David Winters, 10. “Sometimes I follow the men, but not normally. I like the women better.”

He came to the parade with two cousins from Westchester. They made their own custom shirts Tuesday. His had the name of his favorite player — man or woman — on the back. It’s Tobin Heath.

Throughout the tournament, the team was criticized for its goal celebrations, especially after a 13-0 victory over Thailand in the opening match. Lorenzo Andrade, 12, was not among the critics. That’s actually the major reason he likes them.

“Their celebrations are awesome,” he said. “They don’t care what people think.”

Brady Chase, 10, came from Cape Cod. He plays soccer and loves Alex Morgan — her attitude, her toughness. He has been following this team for the past three years.

There was purple hair everywhere, styled after Megan Rapinoe, winner of the golden boot as the top scorer in the tournament and the golden ball as the top player. Izzy Chau, 10, loves soccer, loves Rapinoe and wants to be on the U.S. national team one day. She woke up early to make sure her purple hairstyle was perfect.

Adults were there too, and many took off work to cheer them along Broadway. Maggie Menchaca flew from Los Angeles to New York on a red-eye just for the parade and was scheduled to return to California on Wednesday night. She watched from the stands when the Americans won the World Cup in 1999 and 2015. She missed this year’s tournament in France because she was moving, but she wasn’t going to let anything stop her from going to the parade.

“It’s such cohesive environment and so positive, I just love it,” Menchaca said. “There’s nothing like it.”

Equal pay was a hot topic throughout the entire day, with chants and signs lining the parade route. Kacie Horstman safety pinned a piece of paper that said “EQUAL PAY” in all caps to the back of her jersey.

“It’s not just about the salaries but the prize money, too. The disparity is crazy,” said Horstman, 26, a former recreational player who took off from her job in central New Jersey to celebrate.

FIFA doubled the prize money for this summer’s Women’s World Cup, to $30 million, but the women’s total bonus pool remains a fraction of the $400 million that the 32 men’s World Cup teams — which for the first time in a generation did not include the United States — shared in 2018. 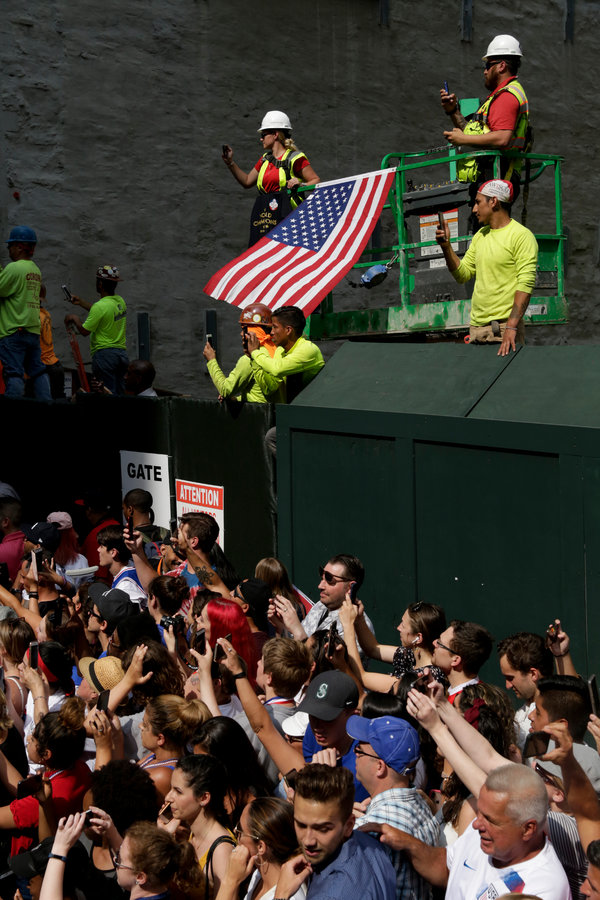 The celebrations continued on the steps of City Hall, with Morgan bringing back her sipping tea move from when she scored against England and Rapinoe throwing her arms out wide. One parade goer spent the past two days crafting a full-size version of Rapinoe’s pose out of Styrofoam to bring with her.

Rapinoe ended the day with a simple message for the crowd: “We have to be better, we have to love more and hate less. Listen more and talk less. It is our responsibility to make this world a better place.”