Billie Eilish revealed her body image struggles have inspired her choice to wear ‘bigger’ clothes on red carpets, confessing she now thinks they can be ‘really unflattering’ in a new interview.

Billie Eilish, 19, has the same body image struggles that many young women face. The “bad guy” singer opened up about comparing herself to other women online, confessing that she’s “not happy” with her own build. “I’m obviously not happy with my body…but who is?” she said in a new interview with The Guardian, published on Saturday, July 31. “I mean, I’m very confident in who I am, and I’m very happy with my life,” the GRAMMY winner added, explaining that seeing photos of other owmen “online” can create self-doubt.

“I see people online, looking like I’ve never looked,” she went on. “And immediately I am like, oh my God, how do they look like that? I know the ins and outs of this industry, and what people actually use in photos, and I actually know what looks real can be fake. Yet I still see it and go, oh God, that makes me feel really bad,” Billie, who recently appeared in a campaign for Kim Kardashian‘s SKIMS, revealed. 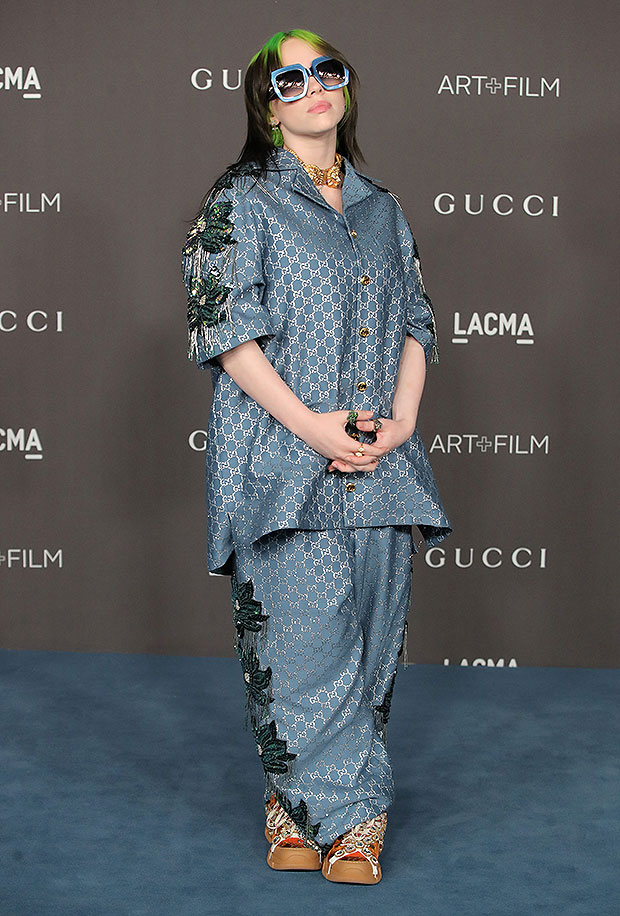 Since blowing up in 2019, fans quickly identified with Billie’s fresh tomboy style and neon green hair. The singer would often wear oversized pieces from designer brands like Gucci and Burberry on red carpets, which she now says were a choice as she “disassociated” with her body. “When I’m on stage, I have to disassociate from the ideas I have of my body,” the Happier Than Ever star revealed to the British outlet. “Especially because I wear clothes that are bigger and easier to move in without showing everything – they can be really unflattering,” she explained.

Recently, Billie showed off a whole new look on the cover of British Vogue as she posed in a 1940s inspired boudoir shoot. The singer looked absolutely gorgeous in a custom blush corset by Gucci for one set, rocking a Burberry bustier and trench for another look. The images, styled by Dena Neustadter Giannini and shot by Craig McDean, were a major departure for Billie’s usual fashion choices — but fans absolutely loved seeing her embracing her body and curves. “It’s all about what makes you feel good,” she said in a cover quote that appeared on the fashion glossy.

Reflecting on her tom boy style, she added she “doesn’t even know” what they look like in photos. “I just completely separate the two. Because I have such a terrible relationship with my body, like you would not believe, so I just have to disassociate,” she explained. “Then you get a paparazzi picture taken when you were running to the door and had just put anything on, and didn’t know the picture’s being taken, and you just look how you look, and everyone’s like, ‘Fat!’”