Billie Eilish just revealed that she lost 100,000 Instagram followers after posting a photo of herself in a corset back in July. The Grammy-winning artist opened up to Elle Magazine about the backlash that came when she started experimenting with her style, explaining that “People hold on to these memories and have an attachment. But it’s very dehumanizing. I lost 100,000 followers, just because of the boobs. People are scared of big boobs.”

Elle noted that comments on Billie’s post included “disingenuous,” “cringy asf,” with one person even saying, “The industry really changed you huh smh.”

“The other day, I decided to wear a tank top,” Billie said. “It wasn’t even a provocative shirt. But I know people are going to say, ‘Holy fuck, she’s dressing sexy and trying to make a statement.’ And I’m like, ‘No, I’m not. It’s 500 degrees and I just want to wear a tank top.’”

She went onto explain that social media is causing her to feel burned-out. “I’m jealous of people who don’t have it. I really wish that there was a way to avoid it. Literally delete my account but still have contact with the fans. I want to be able to have both, but you can’t.”

This isn’t the first time Billie has lost followers because “people are scared of big boobs.” Back in December, she shared a photo of some doodles she drew, and lost another 100,000 followers. 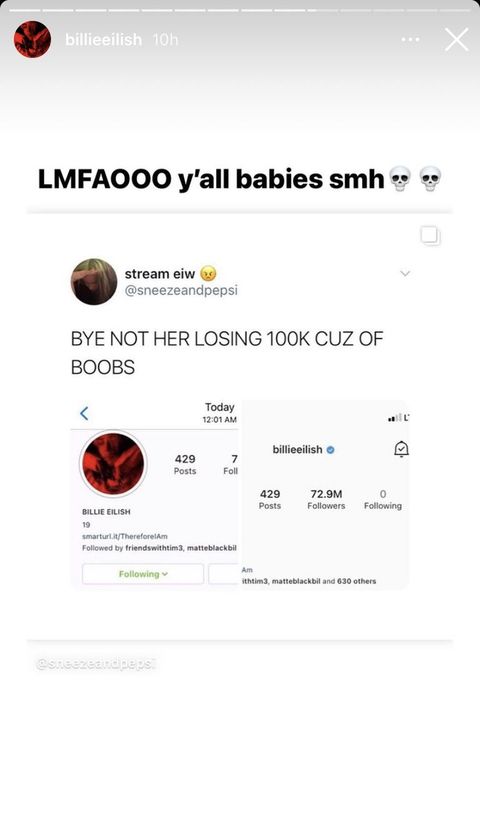