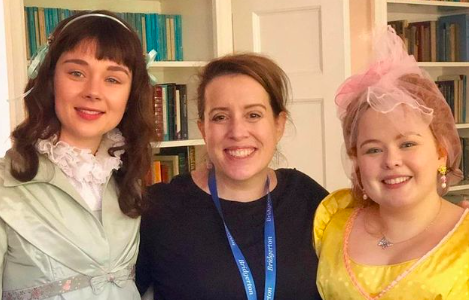 Bridgerton author Julia Quinn is in mourning after her father and her sister were killed in a car crash.

Quinn, 51, confirmed the news on Facebook, telling friends and fans that her dad Steve Cotler and sister Violet Charles died in an accident involving a driver whose blood alcohol level was nearly three times the legal limit.

The romance writer said: ‘I have lost my father and my sister. Because a catering company did not secure their load and canvas bags spilled onto the highway. Because a pickup driver thought nothing of driving while his blood alcohol level was nearly 3 times the legal limit.

‘It will still be dedicated to our father. It won’t be a surprise anymore, but I’d like to think he suspected we’d do it. He knew us so well. He was our dad.’

The Utah Patrol Highway confirmed the fatal crash occurred on June 29 on the southbound Interstate 15 in Davis County.

A statement from police read: ‘A catering company lost their load of canvas bags onto the freeway. Two cars stopped, or nearly stopped, for the debris. A green Ford F-250 came upon the stopped traffic and collided into a red Toyota Prius out of California. The Prius then struck a silver Chevy Malibu.

Cotler, 77, was driving the Prius, while 37-year-old Violet, real name Ariana Elise Cotler, was the passenger; they both died at the scene.

Another adult male was taken by medical helicopter to an area hospital in critical condition, while the driver of the Ford was arrested for DUI, with the suspect’s blood-alcohol level testing at nearly three times the legal limit. The driver was treated for minor injuries.

Like his daughter, Cotler was also a writer, and was known for penning the children’s book series Cheesie Mack.

A post shared on his Facebook page read: ‘On June 29, 2021, our father Steve Cotler was killed by a drunk driver in a crash that also took the life of his youngest daughter, the noted cartoonist Violet Charles. Violet’s beloved service dog Michelle also perished in the crash.

‘A native of Oxnard, CA, Steve’s life was forever changed when he was selected to participate in a program for the state of California’s brightest teenage students (boys only at the time), called The Summer Science Program. In Steve’s words: “SSP was one of the USA’s positive and extraordinarily successful reactions to Sputnik shock. We were high school juniors—future rocket scientists—sequestered for six weeks and intensely challenged with cosmology, astrophysics, spherical geometry, and the like. In that techno-world decades before iPhones, internet, and PCs, we were, I suspect, the only teenagers in the world with daily access to a real computer.”

‘Steve attended Harvard College and Harvard Business School and worked for many years in the corporate world. But his true passion was writing. He spent many years as a screenwriter before discovering what his family knew all along: his heart had never lost the spark of an 11-year-old boy. He wrote the celebrated Cheesie Mack series for middle grade readers and made hundreds of school visits around the country, bringing his irrepressible spirit to thousands of children. He also served for many years on the board of The Summer Science Program, and its expansion and success was one of his proudest achievements.

‘He also took particular delight in being “the most embarrassing dad ever” and may have clinched this award in the late 70s with an appearance on the Gong Show. (He was gonged.) His daughter Julia Quinn, however, tells the story of when she finally stopped being embarrassed by her father: “It was his 25th reunion. I was a sophomore, so I stayed in Cambridge to attend the festivities with him. The entire class of ’65 had gone to a club in Boston for dancing, and Janet Jackson came on the speakers. My father started dancing very badly (typical) but with great enthusiasm (also typical). I saw a few teenagers pointing and snickering, and I thought, ‘Yeah, you WISH your dad danced like that.’ After that, I felt nothing but pride in his geekiness. He was willing to try almost anything, and he never let the fear of embarrassment rule his actions. As a friend said after his sudden death, “We should all be a little more Steve.”’

Quinn’s historical romance novels have been best-sellers, and her Bridgerton series was turned into a smash hit Netflix series last year.

The Shonda Rhimes show, starring Phoebe Dynevor, Regé-Jean Page and Nicola Coughlan, became the most-watched series on Netflix thanks to its steamy scenes, despite some fans initially complaining about the casting.

However, Quinn defended the show from the off, saying: ‘I am in utter love with every single casting choice… Each of these actors will bring depth and magic to the characters in ays that have me shivering with anticipation.

‘I know that some of you are concerned that the actors don’t match the descriptions in books, but I’m not. I didn’t even remember that Simon had blue eyes. Let that sink in for a second. I created the character, but I didn’t recall the colour of his eyes.

‘But you know what I did remember? I remembered his wit, and I remembered how much he adored Daphne… Regé-Jean Page is a brilliant actor, and if I’m allowed to objectify him for one brief moment, he is BEAUTIFUL, and I could stare at him all day. He is every piece of Simon that matters. This series is going to be amazing, and I for one can’t wait.’