The ‘WAP’ hitmaker posts pictures of her son and second child with Offset, Wave Set Cephus, as she says that she wants to have a third child once she’s got ‘business finished.’

AceShowbiz –Cardi B wants to have a third child once she’s got “business finished.” The “WAP” hitmaker, who has four-year-old daughter Kulture and 13-month-old son Wave with husband Offset, is keen to add to her brood and has seemingly suggested that once she’s finished up with her second studio album, the follow-up to 2018’s “Invasion of Privacy”, she’ll get right to it.

Alongside snaps of her son sitting on a display bed in a store, she tweeted, “My son so fire. I can’t wait to get business finished and have my third.” Cardi is now one of the best-selling artists in the world and has already won a host of awards during her rap career. 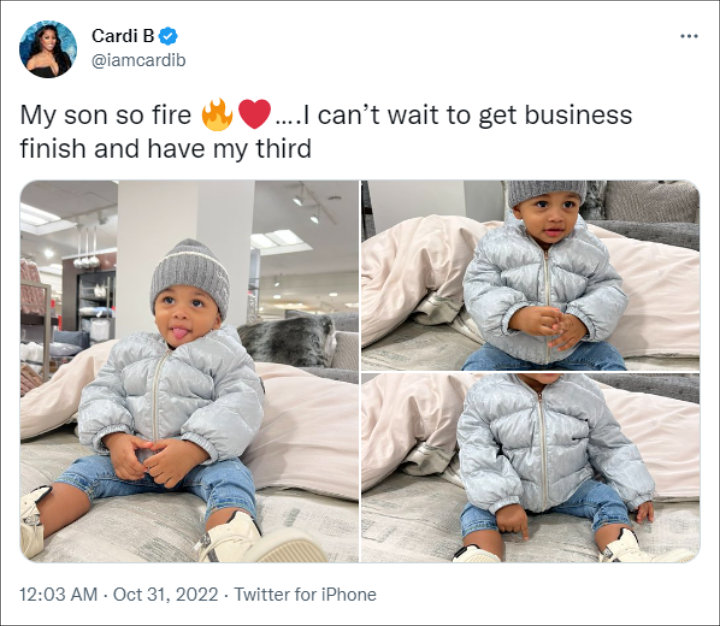 Cardi B revealed her plans to have another child.

But the “Up” rapper previously claimed she was actually happier before she became famous. Cardi, who worked as a stripper before finding success in the music business, said, “One positive thing is that, my family, whatever they want, they get. Everything that I want to buy, I can get. I don’t have to worry so much about my future. One negative thing is that, even though I’m happy, I feel like I was a little bit happier two or three years ago when I had less money. I had less people who had opinions about my life. I felt like my life was mine. Now I feel like I don’t even own my life. I feel like the world owns me.”

Despite this, Cardi doesn’t have any plans to leave the spotlight. And her “real goal” in life is “to have beautiful kids.” She said, “I really want to accomplish more records, more Billboard hits. I might want to get into acting or designing clothes, but my real goal is to have beautiful kids, a beautiful mansion, and do business that makes me money until the day I die. Then be able pass it on to my children.”