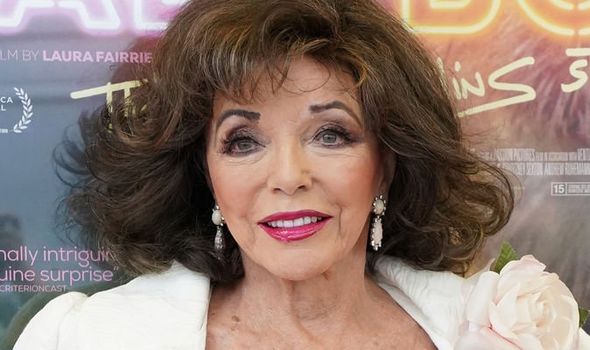 The 88-year-old won a Golden Globe in 1983 and earned five other nominations for her role in the show.

Speaking on the BBC special, This Is Joan Collins, the star recalls:  “It was the right show for the right time. It had beautiful people, beautiful clothes, beautiful sets, real flowers, real caviar, real anger behind the scenes from some of us.

“The 1980s was the ‘me’ decade. The markets were trading bonds with the bravado of Gordon Gekko. And the stock market soared. People were making a lot of money and investing it and living the good life.”

In the new documentary, she talks about unwanted advances from Hollywood bosses, troubled marriages and rows at Dynasty – after she demanded equal pay, she and her co-star John Forsythe (Blake) didn’t speak for one season.

When she went to Hollywood in 1953, Dame Joan met Darryl Zanuck, the head of 20th Century Fox and sex predator. Dame Joan says: “”Not long after I arrived he chased me along the corridor and trapped me against the wall.

“He pinned me like a beetle to a board…’You need a real man honey, a real man’. Luckily a make-up man came and I was able to escape. Basically, I’m a survivor. I have survived being a young female in a business when practically all the men were predators.

“My dad used to say, ‘Just give them a knee in the you-know-what’.”

In February 2002, Joan married Hollywood producer Percy Gibson, who is 31 years her junior. Her previous trips up the aisle were not as successful.

Her first marriage was to Irish actor Maxwell Reed. They married in 1952 when Reed was 33 and she was just 18. She recently said he assaulted her before the wedding.

Her second was Antony Newley, a singer-songwriter. They were together for eight years.

Next was Ron Kass. Kass was a US recording magnate. He had drug and money problems.

Her fourth was to Swede Peter Holm, in 1985. Peter acted as her manager and co-producer.

Dame Joan has three children. Two with Newley and one daughter with Kass. Her daughter, Katy, was nearly killed in a road accident when she was eight and spent 47 days in a coma following the accident. She says: “I know I’ve had a lucky life. But I think I’ve also had my fair share of disaster and unhappiness.

“There have been three miserable, horrible divorces, a terrible situation when my daughter almost died, bankruptcy – almost – and not getting any work as an actor. A lot.

“But who wants reality? There is already too much of it in today’s world and as they say in showbusiness, that’s not what the public pay for.

“I think people like the glamour girl called Joan Collins, even if they understand glamour is just an illusion.”