Donald Trump’s closing remarks at this year’s Conservative Political Action Conference turned heads for many reasons, but above all, for hinting that he is eying a 2024 White House run. “It is far from being over. We will be victorious and America will be stronger and greater than ever before,” Trump said to a cheering crowd (per CNN), before adding, “Who knows, I may even decide to beat them for a third time.”

After Trump coyly told Sean Hannity at a Texan town hall event in June that he has made up his mind about running or not again, he continued to tease a presidential run in late August. Speaking on the “Todd Starnes Show” about rallies held in Alabama and Ohio, Trump announced, “We’re doing some more. We’re going to Iowa. We’re going to Georgia. We’re going to some others.”

Given that the ex-president has been insisting President Joe Biden resign over U.S. efforts in Afghanistan amidst Taliban forces’ August takeover, it is certainly possible Trump feels more confident than ever about re-entering the race in 2024. “It is time for Joe Biden to resign in disgrace for what he has allowed to happen to Afghanistan, along with the tremendous surge in COVID, the Border catastrophe, the destruction of energy independence, and our crippled economy,” Trump laid out in an August 15 written statement (per The New York Post). Now in early September, a new TV spot suggests he might have just aired his first 2024 campaign ad … 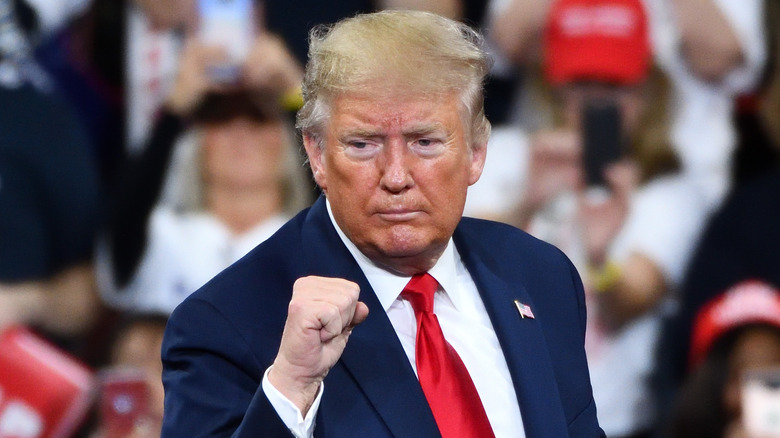 If the ad aired the first week of September by Donald Trump is any indication, the 45th POTUS might have already begun campaigning for a 2024 presidential bid. Trump’s spot, shared on Twitter by his Director of Communications Taylor Budowich, features a series of inter-spliced clips of President Joe Biden speaking about the U.S.’s response to the Taliban’s sudden takeover of Afghanistan in August and the chaos on the ground. Titled “Failure,” the video criticized Biden’s efforts by calling Afghanistan a present “Disneyland for terrorists,” even using a clip of Biden’s accidental slip boarding the steps of Air Force One in March to drive home the point. Budowich’s tweet also relayed a message from Trump stating, “A heartbreaking loss for the United States and its great Military. We must have hostages released and our Military equipment returned, NOW!”

Ran on cable TV, per Fox News, the ad spot was produced by Trump’s Save America PAC which is also currently fundraising through the ad. (Budowich is also the PAC’s Director of Communications.) “I think it’s an issue that Americans are going to care about for a long time,” a Trump insider told Fox News about the ad’s theme, with its premise clearly singling out Biden’s performance as president. The spot could very likely signal Trump’s first targeted step in campaigning for a 2024 POTUS run.