Actor David Tennant and his wife Georgia Moffett met 11 years ago on the set of Doctor Who when Georgia played his daughter.

But, unlike their Time Lord alter egos, with their out-of-this-world powers, the couple are far from invulnerable to the crime-wave engulfing London.

Indeed, members of Georgia’s family have just become victims of a particularly distressing crime for the second time within the space of a year, prompting her to take to social media to report the latest incident. 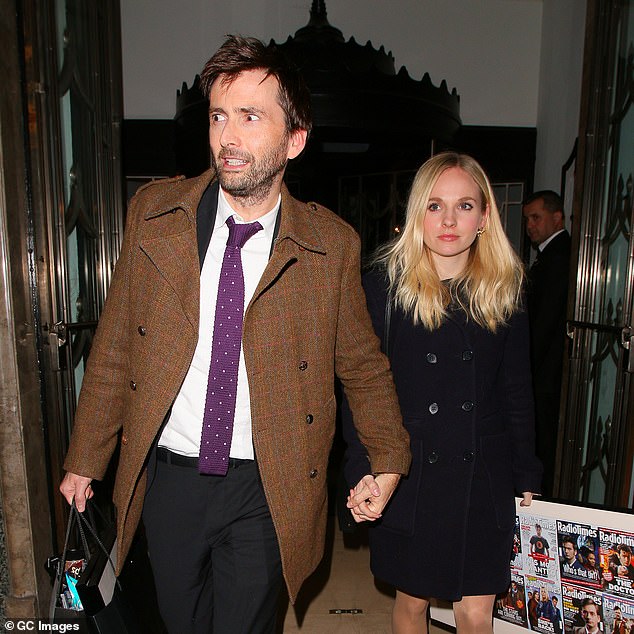 Tennant and his wife are based in Chiswick, where the local police station closed in 2017. They have four children between them

‘Yesterday evening a member of my family was assaulted and mugged for the second time in a year,’ announced Georgia, before pointedly adding: ‘Might be an idea to not close the local police station. Just a thought.’

Tennant and his wife are based in Chiswick, where the local police station closed in 2017.

In a bid to try to bring the assault to the authorities’ attention, Georgia indicated her rage and frustration by tagging the tweet for the attention of 10 Downing Street, the Metropolitan Police, her local MP, Ruth Cadbury, the borough council and London Mayor Sadiq Khan, 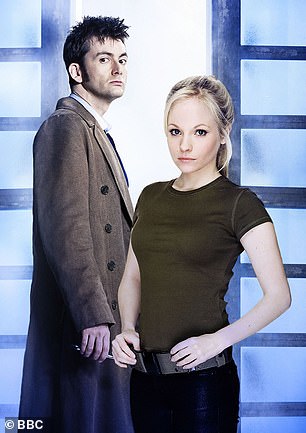 Georgia, 34, and David, 48, have four children between them: three young children born since their marriage in 2011, and Tyler — known as ‘Ty’ — Georgia’s son by a previous relationship, whom David adopted and who is now himself an acclaimed young actor, winning ‘best actor’ at last year’s WhatsOnStage Awards.

Georgia refrains from mentioning which member of the family suffered the assault, while her agent was unavailable for comment. Tennant’s agent declined to comment.

My bobby on the beat is apparently looking into this but would not provide any details.

Tennant and Georgia (daughter of Peter Davison — the fifth Doctor in the 1980s) are expecting their fifth child. With so many Time Lord links, you can understand why they would appreciate a Tardis — an old Police Box — close to their home.

TV’s Vanessa Feltz, 57, takes umbrage at her partner Ben Ofoedu, 47, being referred to as her toyboy.

‘I detest the term “toyboy”,’ she says of singer-songwriter Ben, to whom she has been engaged for 13 years. ‘It’s foul. It reduces a human being to the status of a plaything. It reduces my Ben, a highly complex person, to an object . . . The people who have pre-conceived ideas about age-gap relationships should spend a night at my house.

‘When Ben is snoring in front of the TV at 7pm, I’ll give him a prod and say “Oi, you’re meant to be a toyboy. At least live up to the title!” ’

TV tough guy shows off his feminine side

McMafia hunk James Norton was once tipped as a future James Bond.

However, the 33-year-old actor showed off another side to his character when he indulged in a bit of cross-dressing at Glastonbury Festival last weekend.

Donning a long, red dress split to the thigh, he put his hand on his hip and playfully exposed his left leg.

I asked his agent about James’s sartorial statement, but answer came there none.

Norton has never been shy about baring himself on camera. He shot to stardom in Grantchester as its topless, crime-fighting clergyman. 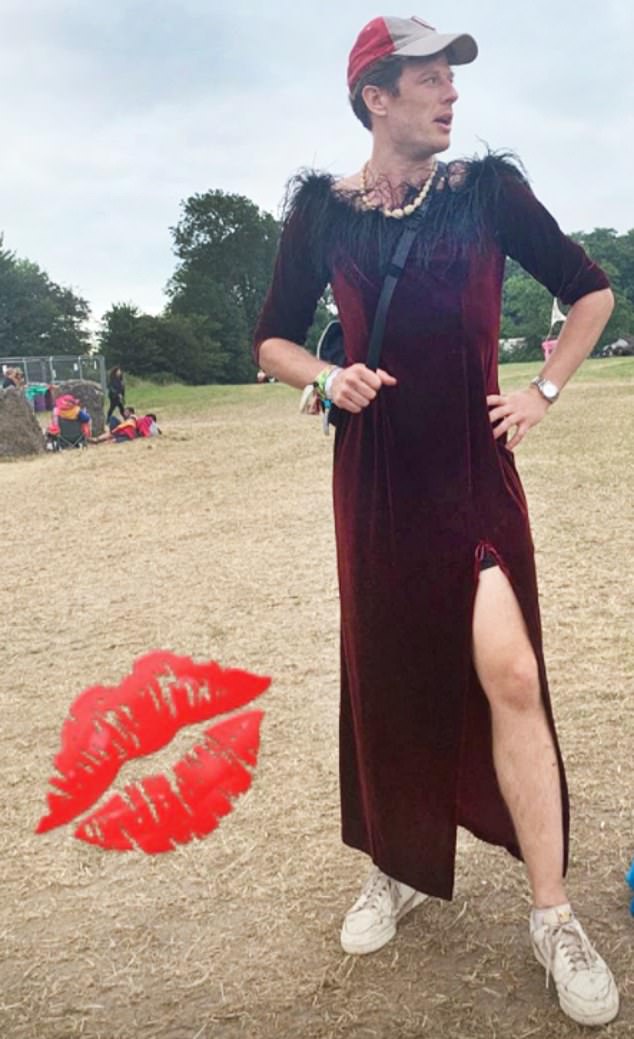 James Norton, 33, showed off another side to his character when he indulged in a bit of cross-dressing at Glastonbury Festival last weekend 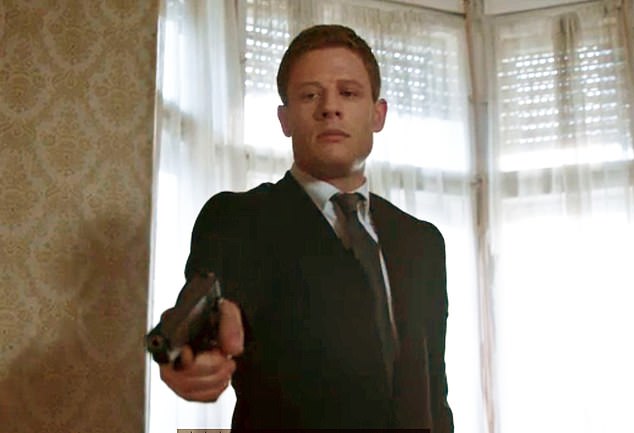 McMafia hunk James Norton was once tipped as a future James Bond. He is pictured in a still from McMafia

Heiress Tamara Ecclestone, who has a five-year-old daughter with her husband Jay Rutland, is still surprised by the strength of reaction to her posting breastfeeding selfies on social media.

‘I got this massive response and a backlash,’ she says. ‘I was so shocked other mums and women could be so violent with their opinions and could get so bothered about what somebody else was doing.

‘I have never asked anyone: “Who did you decide to formula feed?” or “When are you going to take the bottle way?” ’

Why writing’s on the wall for Ian McKellen

Sir Ian McKellen and Hayley Atwell co-starred in ITV’s 2009 remake of The Prisoner. Let’s hope he approves of her latest collaboration — an alteration to his inscription in the Duke of York’s Theatre dressing room in the West End.

Atwell is currently acting in the revival of Ibsen play Rosmersholm at the Duke of York’s Theatre, where Sir Ian starred last year as King Lear.

She occupies the same dressing room as Sir Ian did and reveals: ‘There’s a quote printed in the loo that says: “It is a right royal building with a theatrical tradition fit for a King.”

Ellie plays the vamp in Paris

Actress Ellie Bamber seems to be getting into character for her new role as goodtime girl Mandy Rice-Davies in the forthcoming TV series The Trial Of Christine Keeler.

The 22-year-old wore a black cropped jacket that showed off her midriff and leather trousers as she turned up in the City of Love for the Chanel show in Paris’s Grand Palais.

Rice-Davies and her friend Keeler became embroiled in the Sixties sex scandal that led war minister John Profumo to quit. ‘It’s time the truth came out,’ Bamber has said.

‘They weren’t prostitutes . . . they were just two very, very young women who were totally manipulated.’ 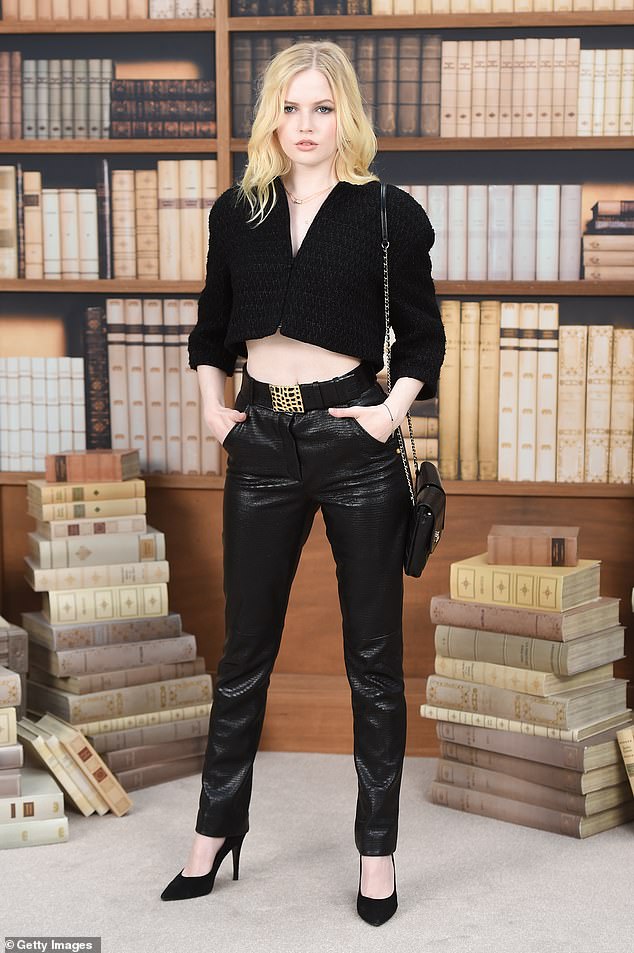 Kate Weinberg, daughter of financier Sir Mark Weinberg, celebrated the launch of her novel The Truants at Daunt Books in London’s Marylebone.

Seven years in the writing, Kate suggested that the creative process had begun long before that.

‘You read to me every night as a small child,’ she reminded her father, ‘and made the world in books the place I most wanted to be.’

Sir Mark, though, insisted Kate was a born storyteller. ‘I used to read to her — but she always changed the ending,’ he told me.

Brad Pitt and the art of wangling a freebie

Doors are always open to Brad Pitt, it seems, no matter how late he turns up.

The Hollywood star is said to have been given a private tour of Tate Modern after the London art gallery was closed.

According to an American source, one of the Tate’s curators was asked to entertain Pitt, who has long been interested in art and design. Pitt (right) has said he’s turned to sculpture as a way to help recover from his messy split with actress Angelina Jolie.

Giving an all-access pass to Lucian Freud paid off for the National Gallery, which received an original painting in his will for their kindness. 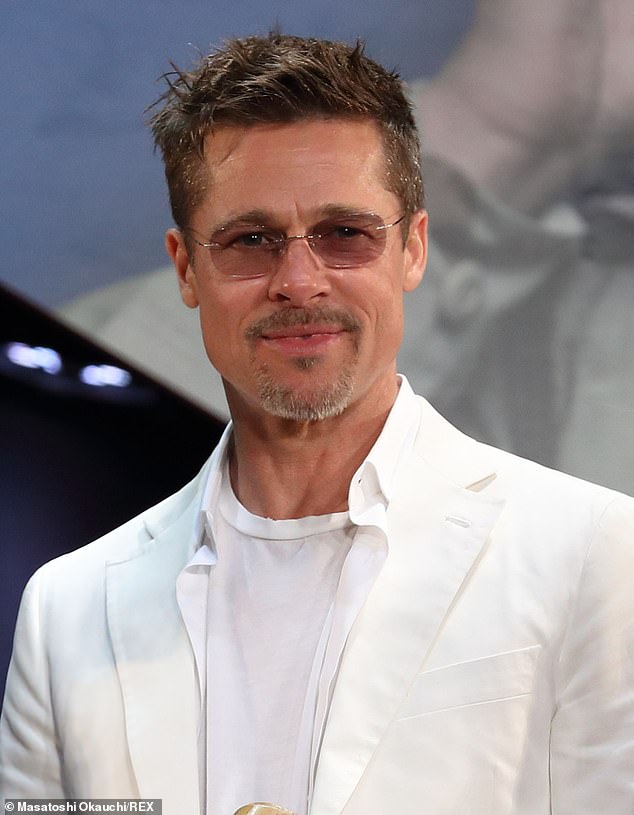