Products featured are independently selected by our editorial team and we may earn a commission from purchases made from our links; the retailer may also receive certain auditable data for accounting purposes.

Amazon announced a slew of new products and services via a video presentation streamed exclusively to members of the press earlier today. This includes updates to existing gear in its Echo, Blink, Ring, and Amazon Halo lines, and some entirely new devices. The themes of privacy, device interconnectivity, and environmental responsibility were woven throughout the event. 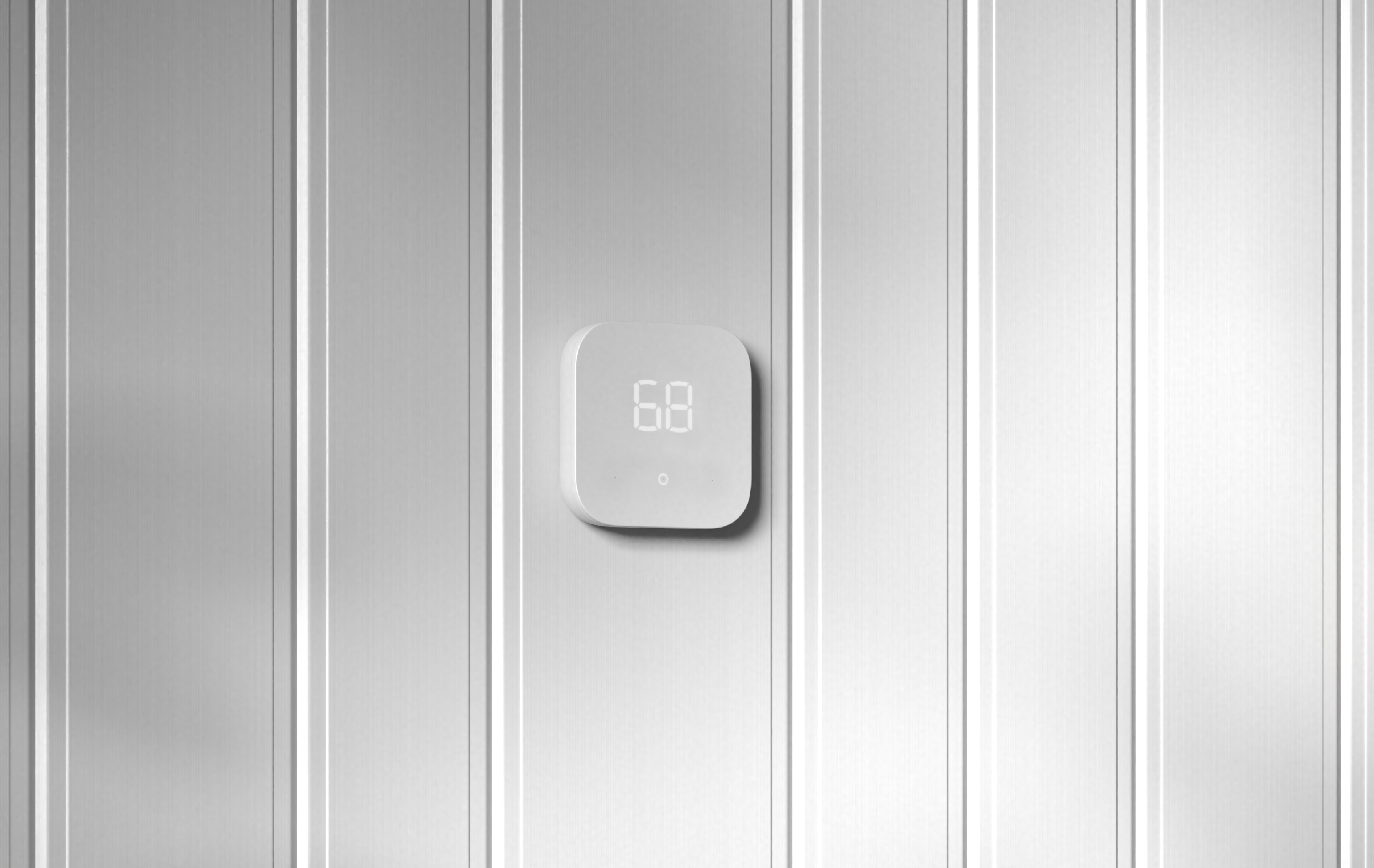 Amazon kicked things off by introducing the Alexa Smart Thermostat, a Google Nest Thermostat competitor developed in conjunction with Honeywell Home. The thermostat can learn your routines to adjust itself automatically, or be controlled via an app or Amazon Echo device.

Its subtle design is meant to blend in with your room, which can’t be said for other smart thermostats. The Alexa Smart Thermostat will cost $59.99, and launch later this year. 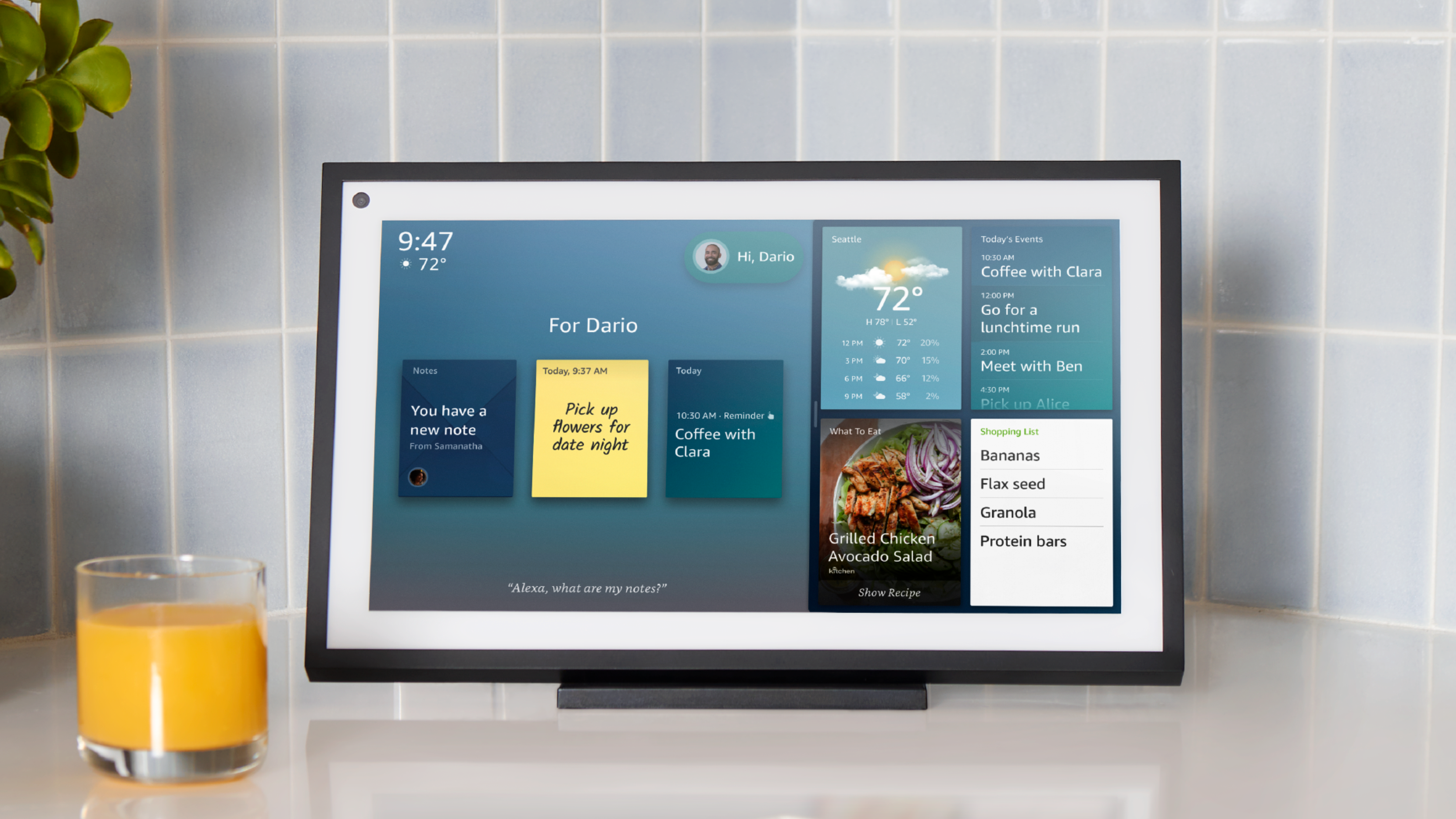 The company moved on to its Echo smart speaker line, announcing the Echo Show 15, its largest smart speaker with a screen to date. It likened the device to a kitchen television, designed to sit in a communal location as a shared digital space. Families or roommates can leave virtual Post-It notes, add items to a grocery list, or check the weather.

While it’s primarily designed to be used by multiple people, Amazon introduced some new features that make the Echo Show 15 useful for each individual. The smart speaker can use its camera to identify the person standing in front of it, and change the information on its display. Once you’re authenticated, It’ll show your upcoming events, notes, or other notifications, for instance. Users can also choose to leave notes for specific people, who will see them when they step up to the device.

Amazon says the Echo Show 15’s facial recognition feature, called Visual ID, is optional, and all of the processing happens on-device, which means your photo isn’t sent up to the cloud. Another new feature coming to the Echo Show 15 is called custom sound detection, which allows you to teach Alexa specific noises that happen in your home.

The company gave the example of setting up this feature with the beeps of your refrigerator. If the Echo Show 15 hears a predefined noise, it can send a notification to people in your home that the fridge door is open.

Finally, the Echo Show 15 has a photo mode, so it can cycle through your pictures (or a selection of ones Amazon has chosen), adding some aesthetics to your room. All of these features every other feature found in Amazon’s previous Echo devices. The Echo Show 15 will be available later this year for $249.99. 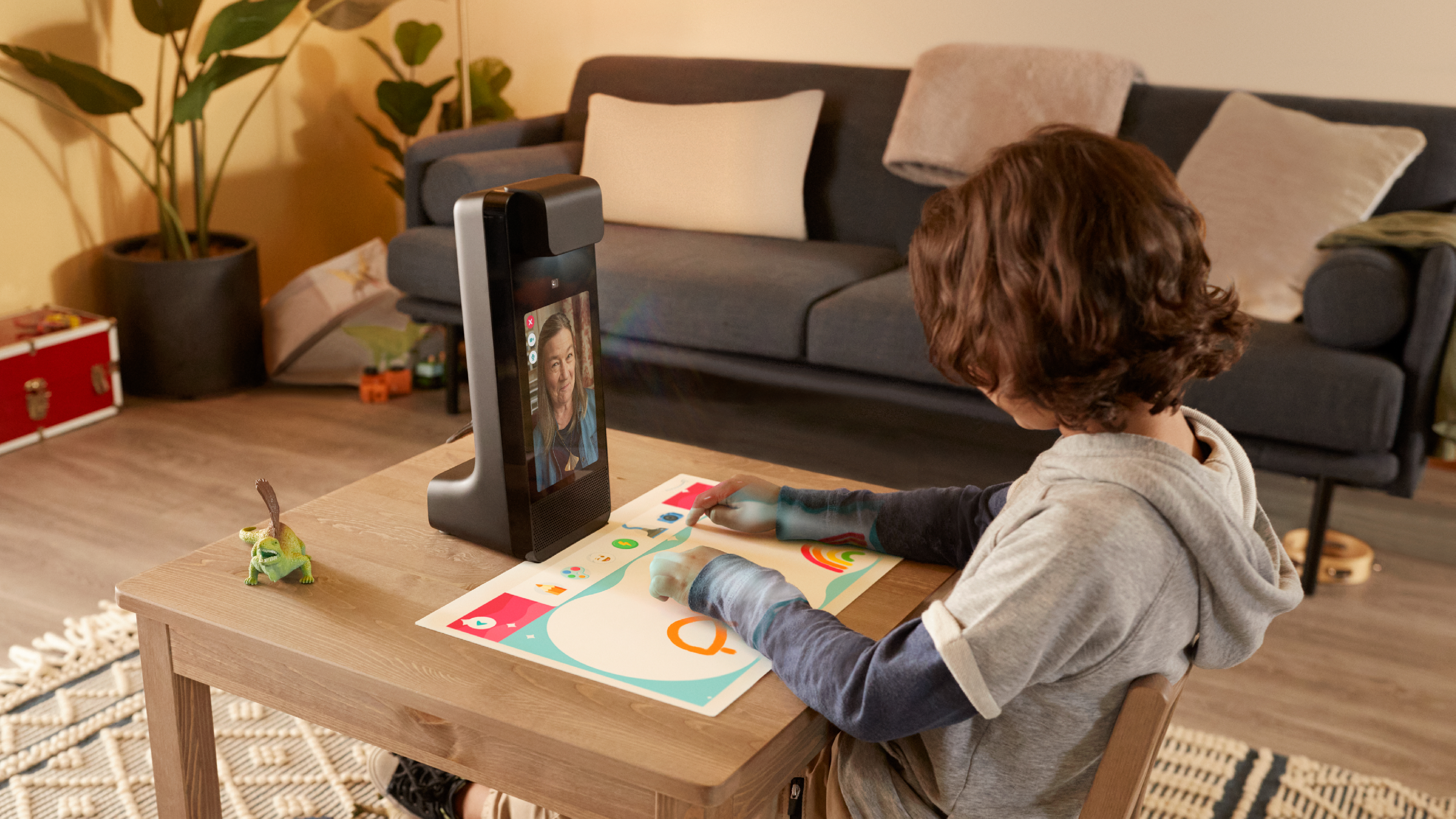 Amazon dedicated a big chunk of its presentation to features designed for kids and families, introducing both new products and updates to existing services.

It started by introducing Do Re Mi, Super Spy Ryan, Stop Robot Babysitter, Lego Monkie Kid, and Blippi’s Treehouse to its Kids+ platform. These shows and games can be accessed on an Echo device, or third-party mobile platforms like iOS.

The company’s first hardware announcement was a collaboration with Disney. By saying “Hey Disney,” Echo users can get trivia facts, hear messages from characters, hear stories, or get led on an interactive adventure. This is the first time Amazon has partnered with another company to this extent.

There’re over 1,000 Echo integrations using this feature. Additionally, Amazon will introduce a new Mickey Mouse stand for its Echo Show 5, which costs $24.99 and can be preordered today.

Amazon continued this section of its event by unveiling its own kid-focused product, the Amazon Glow. This new gadget features an 8-inch vertically oriented touch screen, high resolution video camera, and a downward facing projector. Children can call anyone on an approved list of contacts, and communicate via video chat.

Kids can also play a selection of games or activities developed by companies like Sesame Workshop, Nickelodeon, Mattel, Disney, and Pixar. These activities are projected onto a 19-inch surface, and synced to a device held by the person on the other end of a call. This allows both parties to collaborate in real time.

Amazon Glow will cost $249, and be available as part of the company’s early access program next month. 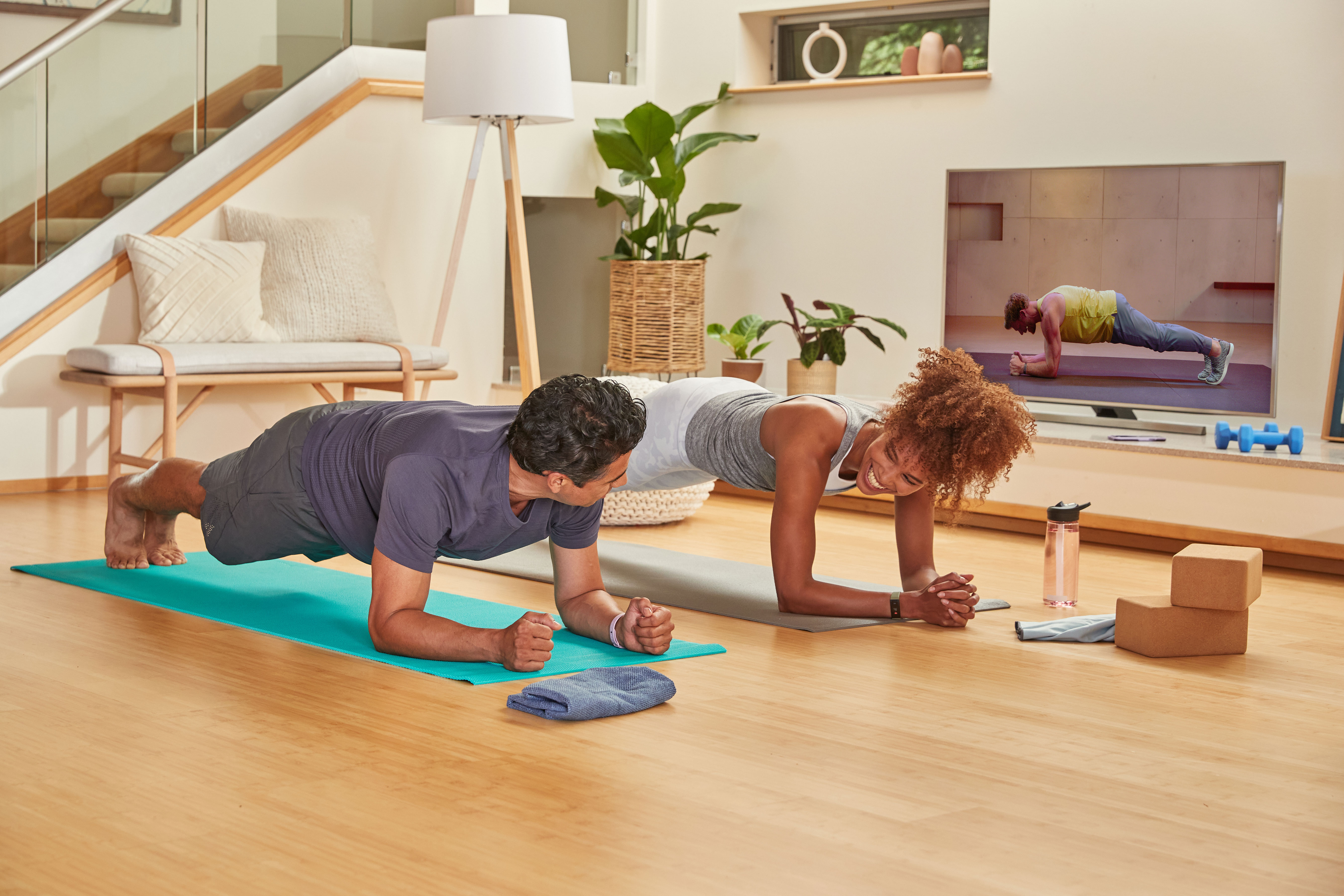 Amazon continued with updates to its health and fitness offerings, beginning with the introduction of a new Halo View fitness tracker.

This model features an AMOLED display, which can show health information — think heart rate and steps — or notifications from your devices. Amazon says its battery can last up to seven days per charge, and that it’s water resistant enough to wear while swimming. The device will be released around the holidays for $79.99, and come bundled with a one year subscription to its Halo Fitness service.

Halo Fitness has been updated with additional workouts, and guided exercise videos taught by professional instructors. Halo View users will be able to see their vitals, like their current heart rate, as they exercise. Amazon previewed a complementary feature called Halo Nutrition, which can help people improve their diet by providing access to 500 recipes and set meal plans to help you get started. Halo Nutrition will launch in January of 2022. 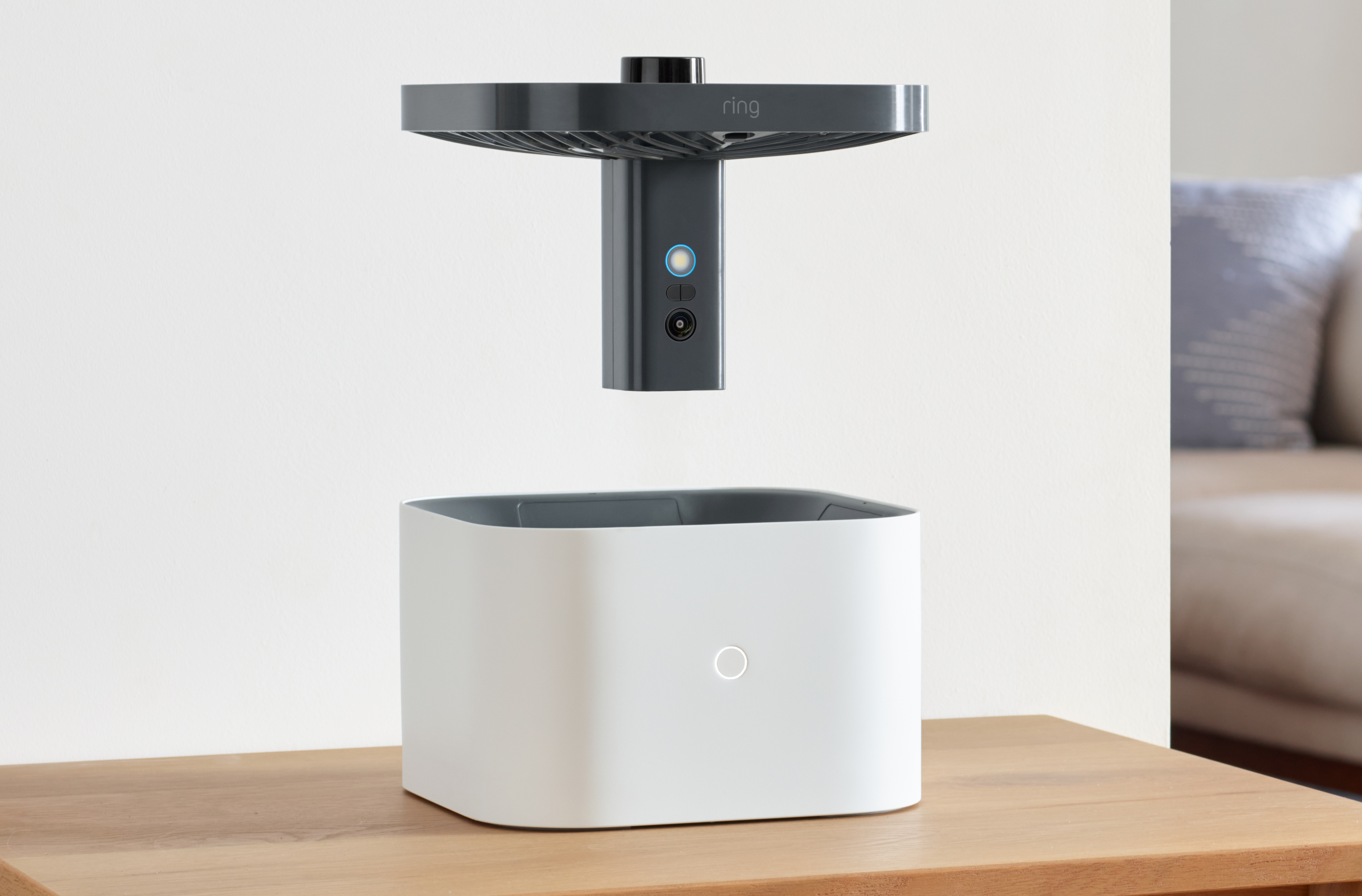 Amazon shifted its focus from fitness to home security, and began this section of its presentation with an update on the Ring Always Cam, which the company announced last year.

The flying, autonomous security camera is essentially a video camera attached to a drone. It can patrol your home at preset intervals, or when a Ring sensor detects unexpected motion. Amazon says that this one camera may be able to cover your entire home. This setup would reduce your reliance on individual indoor cameras placed in different rooms.

The Ring Always Cam costs $249.99, and will be available later this year. 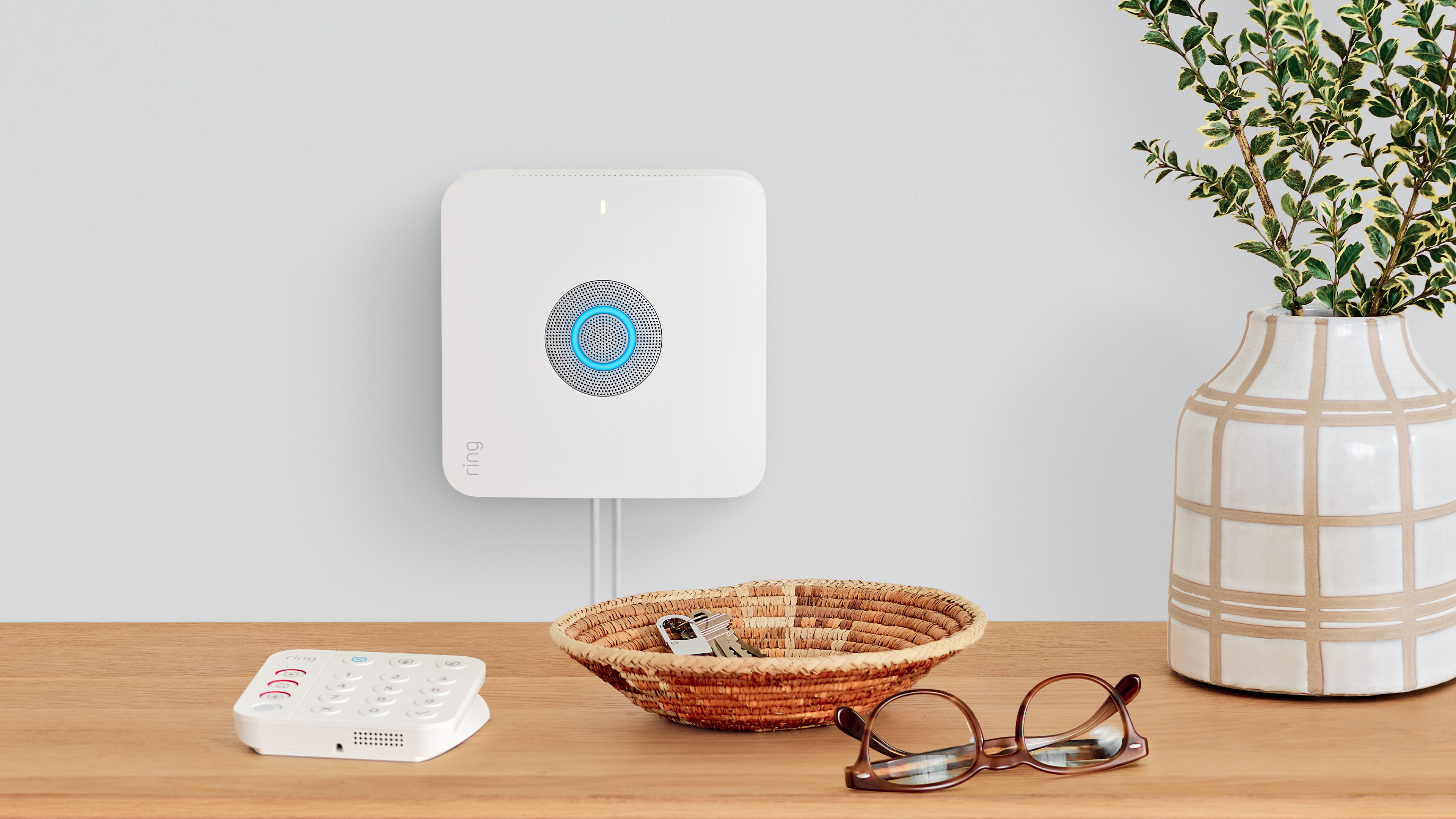 The company continued this part of its program with the introduction of the next-generation Ring Alarm Pro, its all-in-one home security package. The eight-piece security system includes an Alarm Pro Base Station, One Keypad, Four Contact Sensors, One motion Detector, and one Alarm Range Extender. This new system differs from the last generation in two very important ways.

First, it can save its videos to a MicroSD card thanks to a feature called Ring Edge, which means they’ll never be sent to or stored on the cloud. This is a huge privacy feature that hasn’t been available on any Ring security hardware in the past. Second, the Alarm Pro Base Station has an Eero router inside, which ensures the system has a direct connection to the internet.

Ring announced the new Ring Alarm Pro alongside Ring Protect Pro, a $20 per month subscription service that keeps your devices connected via a cellular connection when the internet goes out. The subscription include three gigabytes of data per month, which Ring says is enough to hold 300 videos. Ring Protect Pro also includes access to eero Secure, a suite of features and services that can protect your connected devices from online threats.

The Ring Alarm Pro will be available for $299.99, and can be preordered today. It’ll begin shipping on November 3.

Amazon announced another security service not tied specifically to this hardware called Ring Virtual Security Guard, a $20 per-month service that syncs up your Ring security system with a third-party home monitoring service. If motion is detected, an agent will review the footage and decide if there’re appropriate actions (like calling emergency services) to be taken, or if it’s a false alarm. You get to choose which cameras are able to be monitored, and agents won’t be able to see your preset Privacy Zones. 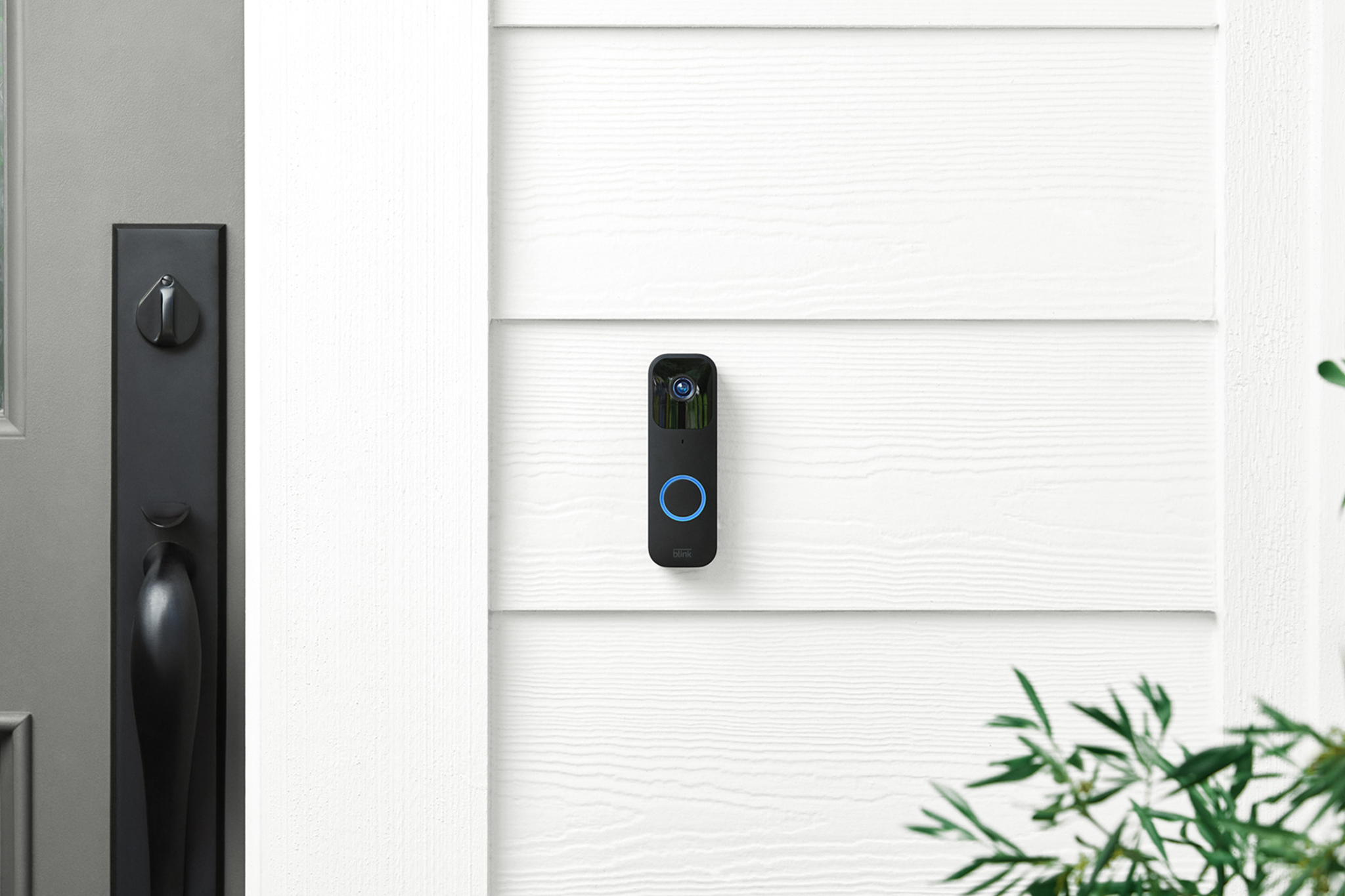 The security section of Amazon’s event continued with the introduction of the Blink Video Doorbell, an HD, wired or battery-powered video doorbell that costs $49.99. The video doorbell supports all the features you’d expect, from motion detection and a two-way microphone and speaker system, to night vision and durability. The Blink Video Doorbell will launch on October 21, and is available for preorder today.

The Blink Video Doorbell was announced alongside the Blink Floodlight Camera and Blink Solar Panel Mount, which augment the company’s existing outdoor security camera. The former will trigger powerful lights to turn on when the camera detects motion, and will cost $39.99 when it launches later this year. The latter will automatically charge the Blink Outdoor Camera’s battery, and will be available as a bundle with the camera for $129.98. 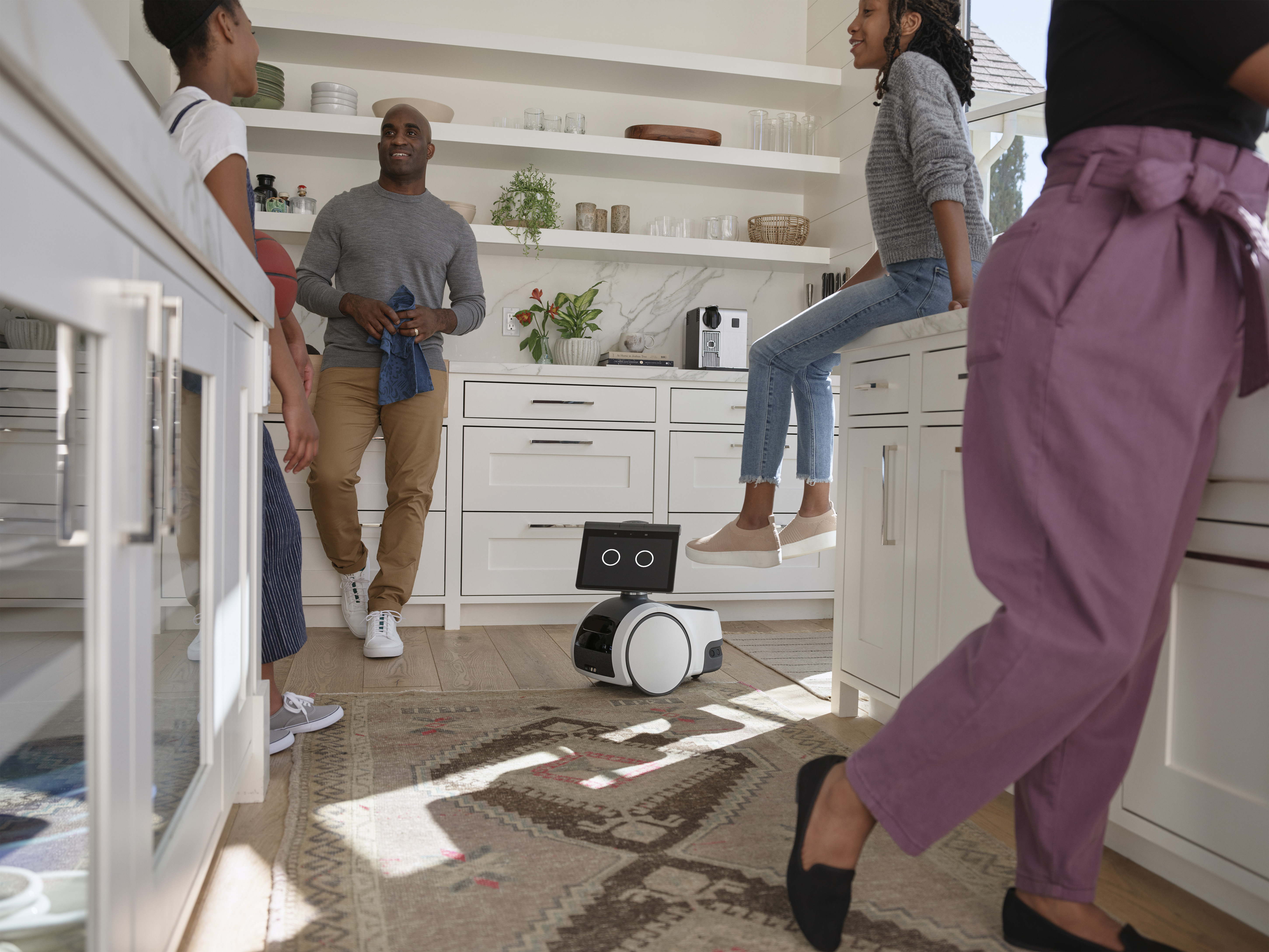 Amazon saved its biggest hardware announcement for last: A $1499.99 fully autonomous robot named Astro, which will be available for $999.99 for day 1 adopters later this year.

The robot uses advanced sensors to map out your home, so it can navigate around obstacles, and detect moving targets like humans and pets. It can detect noises, find their source, and send you an alert so you can check things out for yourself. A periscope camera, which ascends from Astro’s base, allows it to “see” at eye level.

Astro has features that have traditionally been found on Amazon’s Echo Show and Ring products, including the ability to initiate video chats, or work with Ring Protect Pro to alert an active agent if something seems wrong. Amazon says that it’s gone through great lengths to make Astro seem accessible and friendly, which is why the robot displays a digital face when active.

You can also ask it to perform human-like tasks — Amazon showed off beat boxing — to make Astro feel more personable. Amazon says it expects most homes to have a robot within the next decade, and Astro is the first step in that direction. This is the furthest glimpse Amazon has given to its vision of technology in the future, and it’s making the hardware available much more quickly than its main competition.