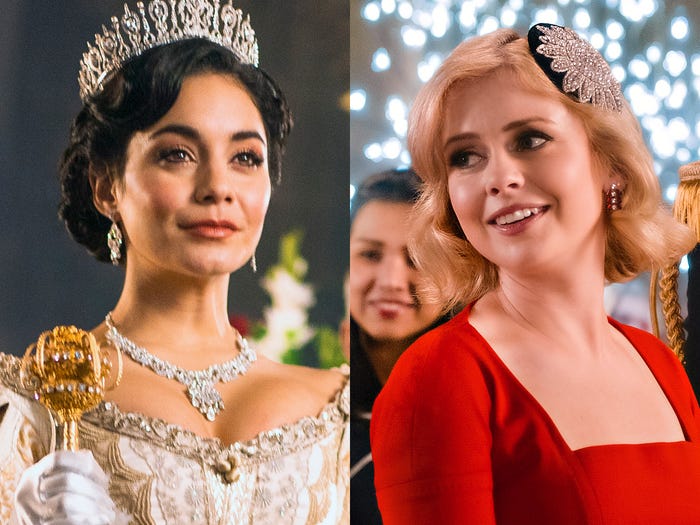 "The Princess Switch: Switched Again" features a cameo that has fans deeply confused about the Netflix Christmas Cinematic Universe.

Near the end of the film, the characters gather for the coronation of Margaret. As she walks down the aisle of the church, Marget smiles at a couple in the crowd. But it's not just a random pair — it's Queen Amber (Rose McIver) and King Richard (Ben Lamb) from the "Christmas Prince" movies released in 2017, 2018, 2019.

King Richard is also seen holding their baby named Princess Elleri, who was born in the most recently released "Christmas Prince" film.

The cameo is puzzling because, in the first "Princess Switch" movie released in 2018, Margaret (who was pretending to be Stacy) watched "A Christmas Prince" with Kevin (Nick Sagar). He also said that it was Stacy's favorite film.

If the Aldovian royals exist in the same universe as Stacy and her doppelgangers, that suggests that "A Christmas Prince" is a documentary and Queen Amber and King Richard are real people, rather than fictional characters.

People took to Twitter to discuss the confusing tie-in after watching "The Princess Switch" sequel.

In December 2019, Netflix confirmed that their holiday films are interconnected in what they refer to as the "Netflix's Holiday Movie Universe."

Films like "The Princess Switch," "Holiday in the Wild," and "The Knight Before Christmas" all contain sneaky or overt nods to other Netflix Christmas movies.

A third "Princess Switch" movie is already in the works, so it's possible that fans will see yet another tie-in to the Netflix Holiday Movie Universe.