Shortly after Olivia Landau discovered Kyle Simon in July 2013 at the Gemological Institute of America in New York, where each was studying precious stones, she went underground to unearth more information about him.

“Kyle was so handsome, and I noticed that he often looked at me at school, and I definitely wanted to have a conversation with him,” said Ms. Landau, who was then 23. “But I realized that he was too shy to approach me and that became really frustrating.”

So one day after school, she decided to follow him into a nearby subway station.

“I always saw him taking the F train uptown, across the platform from me, so I just kind of stalked him,” she said. “I had no idea where the train was going, but I walked up to him and pretended to be surprised and said, ‘Oh, hello, I think I’ve seen you around at school.’” 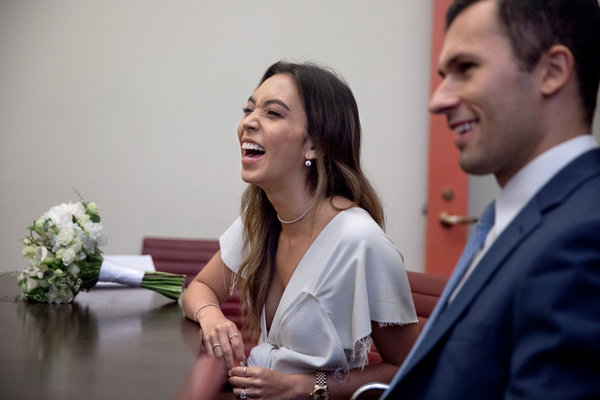 When Mr. Simon, then 24, who was heading to his apartment near Columbus Circle, asked Ms. Landau where she was going, she nervously replied, “Uh, I’m getting off in two stops.”

They began talking shop and Ms. Landau offered to tutor Mr. Simon on diamond grading, a course she had already taken. Students were required to identify the clarity, carat, color and cut of a diamond — each a difficult task that Ms. Landau, a fourth-generation diamond expert, handled flawlessly.

“I sort of grew up in the industry,” said Ms. Landau, whose parents were in the diamond business. Her mother, Lily Landau, was an international private antique jewelry dealer and collector, and her father, Daniel Landau, owned an antique jewelry and precious stones business in Miami Beach, where her parents lived.

Mr. Simon accepted Ms. Landau’s offer to tutor him, and four stops later asked why she was still on the train. “Just then the doors opened and she jumped out,” Mr. Simon said, laughing. “I knew right there that something was up.”

They began dating soon after and “talking for hours on end,” Ms. Landau said. “While I’m pretty intense and neurotic, I found him to be very calm, and much different than any other guy I had ever met before.”

Ms. Landau grew up in Miami Beach and graduated from N.Y.U. She is an only child whose mother was from Taipei, Taiwan, and father was from Antwerp, Belgium.

Mr. Simon, who grew up in Chicago and graduated from Lawrence University in Appleton, Wis., is the eldest of two sons born to Cathy Ann Elias, a professor of medieval and renaissance music at DePaul, and Janos Simon, a professor of computer science and the director of graduate studies in the computer science department at the University of Chicago. His mother had grown up on Long Island, his father in São Paulo, Brazil.

Six weeks after they began dating, Ms. Landau and Mr. Simon were sharing a drink at a bar in Chinatown — “a real grungy, basement-like kind of place,” she said — when he unexpectedly tossed his first “I love you” in her direction. She returned the “L word” on the spot.

In September 2013, Mr. Simon went to Sierra Leone to begin production at Arikymo, a diamond-mining company, which he and a co-founder had started six months earlier. As director of Africa operations, Mr. Simon led the six-man company for 11 weeks before returning home to see Ms. Landau.

(“Arikymo was in good standing and very generous to our community,” said Momodu Maligi, the former Minister of Water Resources for the Sierra Leonean Government who worked in close quarters with members of the Ministry of Mineral Resources there.)

“Though I didn’t see Kyle that entire time, he called me every day,” Ms. Landau said.

While he was away on business, she took a job at Tiffany’s flagship store in Manhattan. “That’s when I began falling in love with bridal jewelry,” she said, “especially engagement rings.”

In April 2014, Mr. Simon was back in Sierra Leone when he developed kidney stones and needed to return to New York for medical treatment.

While he was staying with Ms. Landau in her Chelsea apartment, the Ebola virus, which had surfaced the month before, began spreading throughout Western Africa.

The outbreak claimed more than 11,000 lives over a two-and-a-half-year period. Thousands more lost their homes and livelihoods. Mr. Simon was not able to return to the country to save the business, and it was shuttered.

“Living in that region of the world suddenly became very dangerous,” Mr. Simon added. “I lost just about everything — but I still had Olivia.”

Ms. Landau left Tiffany’s in December 2013 and took another job with a wholesale diamond distributor in Manhattan in January 2014. “I started making rings for family and friends on a casual basis,” she said.

Mr. Simon, now living permanently with Ms. Landau, went out looking for a job of his own. “I was this young entrepreneur who had started my own business, which I thought would make it easier for me to find work,” he said. “But while people were impressed with my story, I couldn’t get a job to save my life.”

He finally found one: “Selling smoothies in a store about two blocks from Olivia’s apartment,” Mr. Simon said. “It was easily the lowest point of my life.”

He kept making smoothies during those rough financial times, until he enrolled at Columbia Business School in September 2015. “Olivia helped motivate me to go back to school,” Mr. Simon said. “We were both very driven to make something of ourselves.”

After his first year at Columbia, Mr. Simon found a full-time summer associate’s job at Goldman Sachs in Manhattan.

In the meantime, a number of Mr. Simon’s classmates were getting engaged, and he steered them toward Ms. Landau, who said that she “kind of became the unofficial, private jeweler to Columbia Business School.”

“I quickly realized that most people did not know the first thing about buying a diamond,” she said. “Making engagement rings was soon becoming a second job.”

In January 2016, Ms. Landau started a blog she called the Clear Cut, and posted her ring designs on Instagram. “It wasn’t long,” she said, “before random people from around the country began asking me to make their rings.”

In January 2017, Ms. Landau left the diamond wholesaler and took a full-time job as a gemologist at a luxury goods start-up company in Manhattan, while her unofficial second job as a designer and maker of rings continued to grow.

“It got to the point where Olivia was making tens of thousands of dollars worth of diamond rings on her lunch break,” Mr. Simon said. “It became clear she had to make a decision” about whether to quit her job and commit to her online business.

In May 2017, Mr. Simon received an M.B.A., and that same month got a higher-paying, full-time job offer from Goldman Sachs. But Mr. Simon instead opted to become partners with Ms. Landau, working alongside her to take the Clear Cut from a well-read blog to a well-run business. She became the company’s chief executive, he its chief operating officer.

In October 2017, Ms. Landau and Mr. Simon applied to Techstars NYC, a three-month mentorship program for young entrepreneurs. A month later they were accepted into the program, and in January 2018, awarded a $120,000 grant to help jump-start their business.

Ms. Landau, now 28, and Mr. Simon, now 29, have since grown their company considerably. The Clear Cut is now a seven-person operation that offers a full line of jewelry.

“Through the good times and bad, it has been a wonderful partnership on so many levels,” he said.

The couple married June 19 at the Manhattan Marriage Bureau before Michael McSweeney, the city clerk, who led a brief but heartfelt ceremony.

Ms. Landau, clutching a bouquet of white roses, peonies and lilies, was stunning in a cream-colored dress by the Colombian designer Moda Zeta. She also wore an Art Deco-style asscher cut diamond engagement ring from her mother’s inventory, which she had greatly admired since she was 8, as well as her mother’s mine-cut diamond drop earrings. “My mother has the best antique jewelry since she is in the business and she has the best style,” Ms. Landau said. “I wanted to have a piece of hers with me for the ceremony.”

During the exchange of rings, Ms. Landau had a bit of trouble slipping an 18-karat yellow gold band over one of Mr. Simon’s knuckles, completing the task at least 30 seconds after telling her soon-to-be husband, “With this ring, I thee wed, and pledge my constant faith and abiding love.”

Alexis Campisi, who has been Ms. Landau’s best friend since they met at a party in the Hamptons eight years ago and discovered they both lived on the same Chelsea street, served as one of the couple’s two witnesses. “I think they balance each other out greatly,” Ms. Campisi said. “Olivia is very creative and very outgoing, and Kyle is very structured and business oriented, and they both allow each other enough space to fulfill their dreams.”

On June 30, the couple took part in a larger celebration at Villa Mazzarosa of Segromigno in Monte in the province of Lucca in Tuscany, Italy, near where the groom spent the summers of his youth. A reception followed at a family friend’s villa, which was built in the 1600s.

Guests were greeted with a glass of prosecco from a nearby vineyard in Monte Carlo. They made their way through antique iron gates into the back of a garden covered in fresh wildflowers where Rabbi Yitzchak Dees led a ceremony before 90 family members and friends.

Later in the evening at dinner, guests sat on the south lawn at a long, U-shaped table covered in olive leaves and candles. They were soon up on their feet, dancing beneath the Tuscan stars, like so many diamonds in the sky.

Where The Manhattan Marriage Bureau

A Witness to ‘Power’ Antonio Melara, one of the couple’s two witnesses during their civil ceremony, called the bride and groom, “the perfect power couple — two very motivated people in life who aggressively pursue their goals.”

A Slice of Italy On June 29, the day before the couple’s second ceremony, the couple hosted a pizza party on a small private farm in Marlia, a village outside Lucca, in Tuscany, Italy.

Bling Is Her Thing At the Italian ceremony, the bride wore her engagement ring and her mother’s earrings as well as an emerald-cut eternity band she designed for herself. 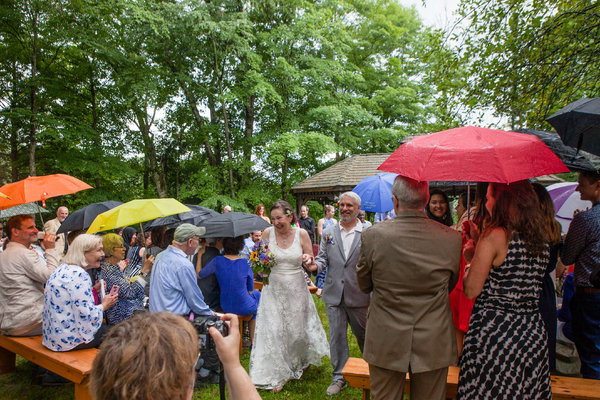 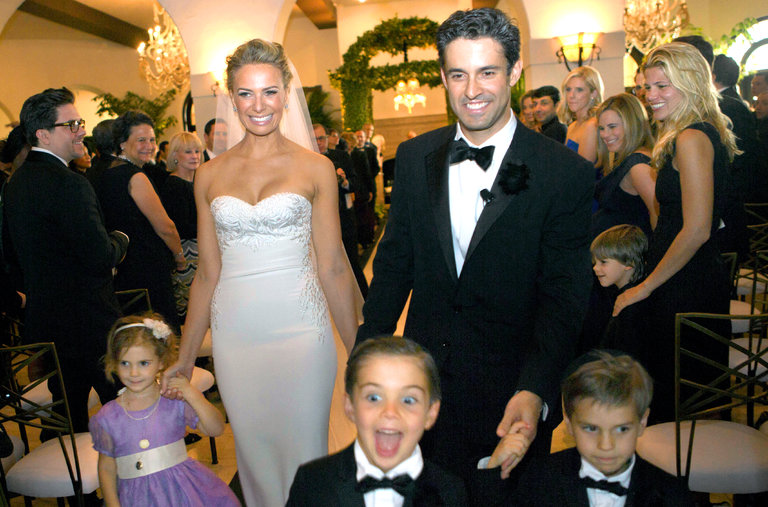