Two years ago, fresh from the breakup of a seven-year relationship, Rebin Shah, also known as the Swedish rapper Rebstar, was urged by friends to join Raya, a dating and networking app for people in the entertainment industry.

Although skeptical, he agreed to give it a try. “There were a lot of familiar names on it, so it caught my attention,” said Mr. Shah, 30. “It’s linked to your Instagram account, but everyone’s verified. I went on one or two dates, but they were nothing special.”

Then he matched with Megan Callahan, a writer for the “Weekend Update” segment of “Saturday Night Live.” Mr. Shah was familiar with the late-night comedy show, though he had never seen a full episode.

“Her account was private with only 300 followers; she was different,” he said. “Everyone was bragging, uploading the flashiest, biggest photos. Hers were of a person. Her caption was, ‘I’m the founder of the Frye’, the failed music festival, so she had a sense of humor.” 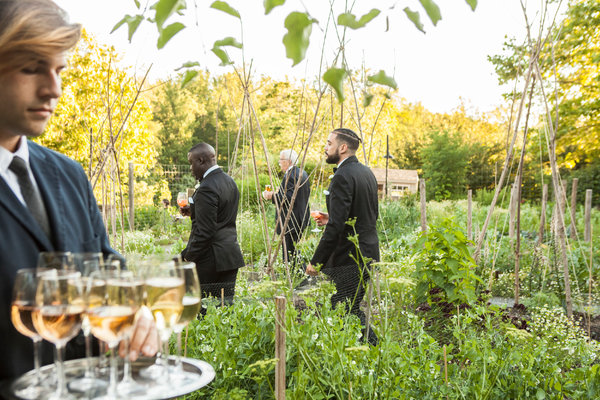 Ms. Callahan, 34, said she joined Raya because “everyone at work was checking it out. I met some interesting people but I didn’t think I would find ‘the one.’ I was resistant.”

When she saw Mr. Shah’s photos, she was unimpressed, until the last shot. “He had a bunch of stereotypical rapper photos, but the last one showed him dressed in a button-down shirt with glasses,” she said. “He looked like a nerd and I thought there’s more than meets the eye.”

Mr. Shah sent Ms. Callahan a message. She messaged him back. The two exchanged phone numbers and tried to make a plan to meet. “That took six months,” he said. “Every time she was here I was in Sweden. If I was here, she was in L.A. She was on my mind, so we kept trying.”

Their New York schedules clicked in October 2017 while Mr. Shah was home promoting an album and Ms. Callahan wasn’t returning to work until that Monday, after being on a four-month hiatus.

A date was finally set. Then came a cancellation.

“Rebin texted and said he wasn’t feeling well, was there any way to reschedule?” Ms. Callahan said. “I said, ‘No offense, but you don’t understand. When the “S.N.L.” season starts no one sees me for nine months.’ I really wanted to meet him. If we didn’t do it today I didn’t know if we ever would. I was also having an amazing hair day — it was magic time.”

Mr. Shah was exhausted. “I wasn’t in the mood to leave the house, but she was so adamant about getting together,” he said.

The two lived only blocks from each other in Manhattan’s West Village, and decided to meet at their local bar, Fedora, at 10 p.m. Mr. Shah was running late.

“I hate when people are late, it makes me crazy,” Ms. Callahan said. “So I stood in the street in front of the bar. I saw him turn the corner and he flashed this amazing smile. He looked so handsome.”

Then Ms. Callahan pointed, as if to say, “You!”

“I instantly fell in love with her,” he said. “I’d never had someone point at me. It was like she was saying, ‘You’re the one.’”

They had a few drinks at Fedora, then migrated to Kettle of Fish, a neighborhood bar in
Greenwich Village that provided quieter surroundings.

“I’ve been on many first dates and not had the meaningful conversation we had,” Mr. Shah said. “We talked about our families, what inspired us to follow our dreams. We shared important details you don’t tell people. It was like we knew each other for years.”

Ms. Callahan felt similarly. “He was so warm and kind. Our conversation had a natural depth. There was something that clicked that I’ve not experienced before.”

A kiss was shared at 1 a.m. Then they left the bar and walked around for an hour. Though neither wanted to leave, both got into Ubers and went home.

“I don’t fall for people, but there was something about her,” Mr. Shah said. “I wanted to see her again, but didn’t want to be too pushy. I had no idea how she felt.”

Ms. Callahan, who had recently gotten out of a four-month relationship, was less impulsive. She felt it was a good date, but preferred to take things slow. “I wasn’t thinking of this through a serious lens,” she said.

A spontaneous date happened on a bench at Washington Square Park a week later. More deep conversation ensued. Another date followed. Then another. Then it was Thanksgiving, which was spent together at Ms. Callahan’s apartment with each other’s friends.

“We were falling so naturally into a life together,” she said “I wasn’t taking time to reflect that maybe this was something serious. That’s when it clicked. My heart was in love but I wasn’t connecting the dots.”

In February 2018, Mr. Shah wanted to celebrate both Ms. Callahan’s birthday and Valentine’s Day and planned a surprise trip. Ms. Callahan was only told about the weather and to bring her passport. At Kennedy Airport, she learned they were flying to Sweden, and then to Denmark to see the singer Daniel Caesar perform.

“No one has ever done anything like that for me,” said Ms. Callahan, who cried at the airport once she found out where they were going. “That’s where I fell in love with him. Getting to know someone’s past and their life is special. I met his mom and his friends and got a complete picture of his life. It closed the circle for me. I know this person now and I love everything I’m seeing.”

While Ms. Callahan had her internal love revelation, Mr. Shah struggled to say his out loud.

“I wanted to say, ‘I love you’ on her birthday, but couldn’t muster up the courage. I tried on Valentine’s Day and I couldn’t do it,” he said. “I said it in Swedish while she was sleeping, but she didn’t wake up to ask what I said.”

He did it on the flight home.

“I felt like lightning struck — it was the nicest moment of my life,” Ms. Callahan said. “I didn’t say it back because I wanted to be sure for myself. Then I worried that I ruined the beautiful moment. Then he went to sleep and I was up thinking about it.”

They returned to New York on Feb. 15. Mr. Shah’s lease was up that week. Rather than renew, Ms. Callahan asked if he wanted to move in. He did.

A month later, while the pair were home working on different projects, Ms. Callahan returned the “I love you” sentiments.

“I had never said those words to anyone before, but I had this feeling that if I don’t say it, I’m going to explode,” she said. “He was so surprised. It was such a beautiful moment.”

Last September, Mr. Shah picked out a diamond ring at Tiffany’s. A proposal followed on Oct. 3, two weeks after the couple’s one-year anniversary, at a gala for the World Childhood Foundation held at Cipriani Wall Street.

“I was so nervous, I blanked out completely,” he said. “The last thing I remember is Megan nodding yes, and trying to get the ring on her finger, but couldn’t.”

Ms. Callahan said, “I blacked out, too. If I hadn’t watched the video Reb had organized beforehand, I wouldn’t remember that he got on his knee or that I touched his face.”

On June 14, the couple were married in front of 82 family members and friends by the Rev. Caroline Stacey, an Episcopal priest, in a courtyard at Blue Hill at Stone Barns in Tarrytown, N.Y.

Ms. Callahan said her personal vows in both English and Swedish while Mr. Shah sung his. The minute-long rap took only a day to write, but a lifetime of waiting to say.

“Rebin is so sweet and joyful, I knew immediately I would love him,” said Jane Callahan, the bride’s mother. “I feel this chemistry going on between them.”

Lisa Mary Macford, Mr. Shah’s mother, added similar sentiments: “I have never seen him love someone so much. He’s my only child and his happiness is my happiness.”

Cocktail hour was also spent outside. Guests nibbled on an assortment of delicacies, including pea burgers with goat cheese and lobster tacos, and sipped rhubarb spritzers, wine and Champagne. Dinner was held upstairs in the HayLoft facility.

“He’s a hopeless romantic,” Mr. Stahle said. “I saw the way they looked at each other last year when they came to Sweden. They have a loving glance and adoration for one other.”

A three-tier chocolate cake, covered in white honey butter cream and adorned with roses, was cut shortly after 10 p.m. The bride and groom fed each other.

“When we met, I was going through a lot of growing pains and was in a dark place,” Mr. Shah said. “She was really there for me and didn’t give up on me. She holds up this mirror and I don’t see myself. I see a better version of myself because she sees that in me.”

Where Blue Hill at Stone Barns in Tarrytown, N.Y.

First Dance The couple chose the song “Best Part” by Daniel Caesar, featuring H.E.R. “It feels like our song that someone else happened to write,” said the groom. “When we listen to it, it slows down time.”

Attire The groom wore a tuxedo from Tom Ford. The bride wore a white gown from Hayley Paige that was purchased at Kleinfeld’s. “It was the first one I tried on,” she said.

Goody Bags Guests left with some decent swag. “We wanted to share a piece of ourselves so we made a list of favorite things we eat and use,” the bride said. Among the items: Google Home Mini, assorted chocolates from Chuao Chocolatier, Coola Classic Face SPF 30, CleanWell hand sanitizer, Justin’s peanut butter cups and Boxed Water. Each attendee also received a personalized handwritten note.

Wedding ‘Update’ Colin Jost, a writer for “S.N.L.” and an anchor of “Weekend Update,” was in attendance. (His fiancée, the actor Scarlett Johansson, was not.) 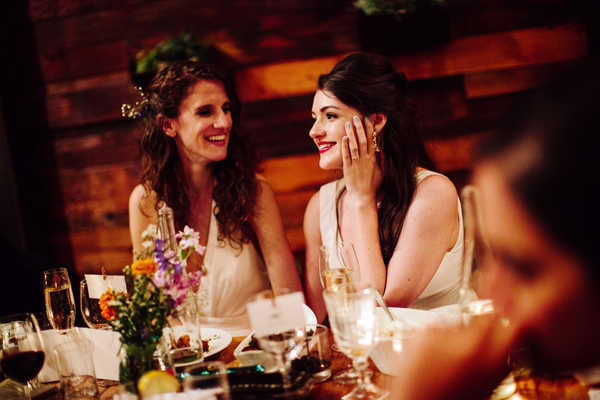 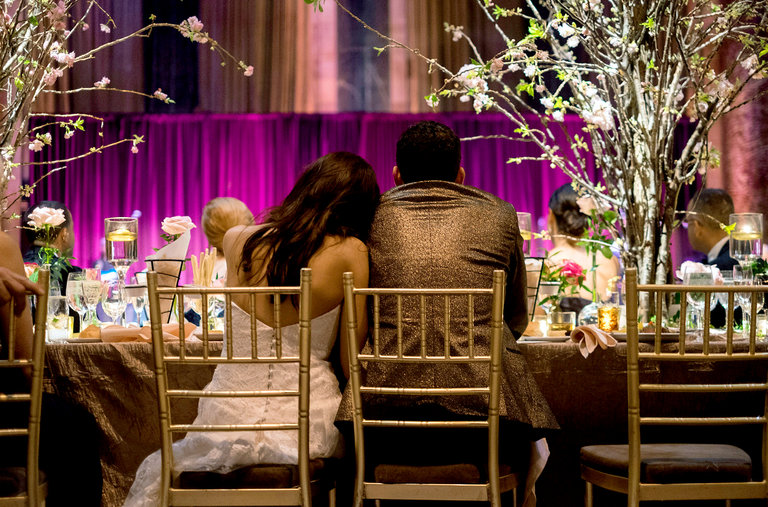