PORTRUSH, Northern Ireland — Rory McIlroy will assuredly receive the loudest ovations throughout the British Open. McIlroy, a native of Northern Ireland and the third-ranked golfer in the world, has already drawn hordes of spectators to his practice rounds at Royal Portrush Golf Club, the tournament site and a course he has played since he was 10.

But forget that McIlroy is the presumptive favorite as the Open returns to his golf-crazed home for the first time in nearly 70 years. When the Open begins on Thursday, he knows the moment will be “bigger than me.”

“To be able to have this tournament here again, I think it speaks volumes of where the country is and where the people that live here are now,” McIlroy said, referring to the three decades of bloody political turmoil known euphemistically as “the Troubles.”

Ian Bamford, who was the North of Ireland Amateur Open champion in 1954 and 1972 and has been a member of Royal Portrush since 1944, recently discussed the effects of the conflict, which claimed some 3,600 lives, and what it meant for his beloved game’s position in Northern Ireland.

“The turmoil was terrible, the number of deaths, the number of families that were being broken up,” Bamford, 86, said. “The Open was very far from people’s minds. Golf clubs were being blown up. The game itself was in jeopardy, although the championships went on.”

Bamford watched as the Englishman Max Faulkner won the Open in 1951, when it was last held at Royal Portrush. The club gradually climbed back to prominence after the signing of the Good Friday Agreement in 1998 stemmed the insurgency.

Portrush hosted the 2004 Senior British Open and the 2011 Irish Open, both critical steps. Then the Irishman Padraig Harrington won consecutive Open titles in 2007 and 2008, and Graeme McDowell, a Portrush native, won the 2010 United States Open. In June 2014 Peter Dawson, then the R&A chief executive, announced the return of the championship to Northern Ireland.

McDowell, who qualified for this year’s Open by sinking a 30-foot putt on the 18th hole at the Canadian Open in June, said the return to his hometown had been extraordinarily meaningful. 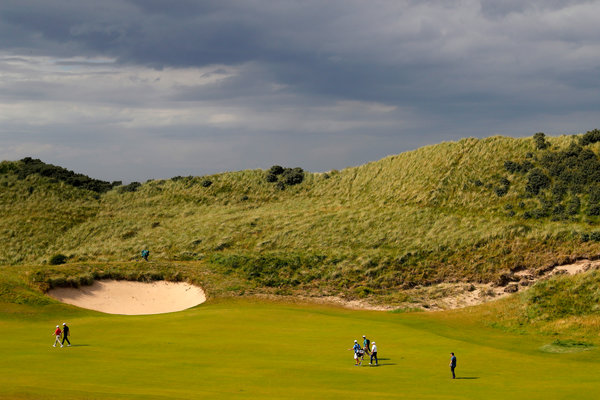 “The buzz from the people this week, it’s been amazing the past few days,” the 39-year-old McDowell said after practicing in front of scores of supporters this week. “This should put Portrush on the global stage, and it should, hopefully, look amazing on TV this weekend.”

Bamford called the Dunluce Links, the Open course, a “masterpiece of design more enduring than brass.” Designed by Harry Colt, it opened in July 1933.

That may well be, but considerable changes were made to accommodate the championship and the huge crowds it is expected to draw. Two new holes were built: the 592-yard, par-5 seventh, and the daunting 434-yard, par-4 eighth.

Tiger Woods, the reigning Masters champion, is seeking his fourth British Open win and his first since 2006. On Northern Ireland’s rugged coast, he will have to decipher a course that he is playing for the first time.

“It can play so many ways, depends on the wind,” Woods said. “Some of the bunkers here, you wonder why the hell is it there, and then all of a sudden it’s in play.”

Brooks Koepka, the four-time major winner, may have an advantage because his caddie, Ricky Elliott, grew up in Portrush.

“Definitely have a little bit more confidence having him on the bag this week, knowing this course so well,” Koepka said. “I don’t think when he grew up that he ever thought there would be an Open Championship here.”

Elliott has already helped navigate the area, having reportedly warned Rickie Fowler that his trademark orange shirts, a nod to his Oklahoma State days, could carry a different significance in Northern Ireland, where the color has long represented Protestant loyalties.

McIlroy, who grew up near the capital, Belfast, holds the Dunluce Links record of 61, a score he fired as a 16-year-old in 2005. Before that, his father treated him to a round at Royal Portrush for his 10th birthday.

“Portrush has been a very big, at least the golf club, has been a big part of my upbringing,” McIlroy said. “It’s sort of surreal that it’s here.