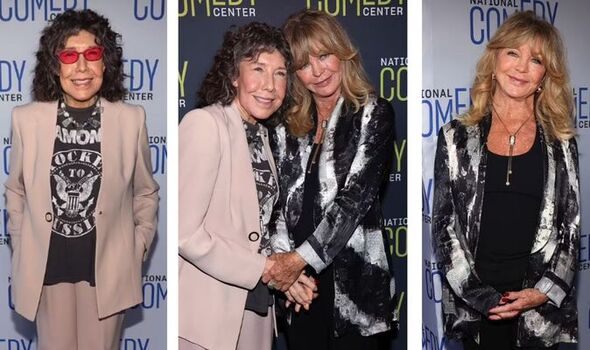 Goldie Hawn and Lily Tomlin have a combined age of 159, but the small matter of older age didn’t prevent the age-defying duo from living their best lives on the red carpet over the weekend.

Goldie Hawn, 76, and Lily Tomlin, 83, stunned the crowds with their totally age-defying looks, as they demonstrated that the twilight years are no barrier to looking spectacular.

The pair had stepped out at the Comedy Store in Los Angeles, California, where they and a host of other celebrities had gathered to honour George Schlatter.

The director and producer is best known for his work on Rowan and Martin’s Laugh-In, and for founding the American Comedy Awards.

Lily wore a beige trouser suit with a hint of blush pink, paired unusually with a punky Ramones t-shirt and a pair of white trainers.

Meanwhile, Goldie donned a tie-dye style patterned blazer and black trousers with slits at the ankle for the prestigious event.

Posing with the pair on the red carpet was Jo Anne Worley, who starred in the George Schlatter-directed Rowan and Martin’s Laugh-In – and the 85-year-old brought a touch of vintage style to the occasion, stunning in her 1960s flower power themed outfit.

Jo Anne Worley’s neon pink outfit had a touch of the psychedelic, which had been in fashion in her heyday, when she was in her 20s.

Goldie Hawn, Lily Tomlin were all smiles as they joined George Schlatter on the red carpet, each linking arms with him as they posed beside Jo Anne Worley.

Goldie Hawn is no stranger to red carpet events

The Christmas Chronicles star, who recently appeared in an advert with daughter Kate Hudson, also showed up at the 2022 Concordia Annual Summit in New York last month.

Goldie Hawn might be 76, but her attitude is completely youthful

Just weeks earlier, Goldie Hawn had been bouncing around on a trampoline to Dua Lipa’s ‘Physical’ and demonstrating her surprisingly vigorous dance moves. Her stunned son Oliver posted a video of her athletic prowess recently, quipping: “She insists I came out of her belly but I’m not buying it.”