Hailey Baldwin has shared a series of sweet pics and videos while getting caught in a rainstorm on a tropical vacation with her husband, Justin Bieber.

Hailey Baldwin has stunned on a late summer getaway with her husband, Justin Bieber. The supermodel was seen wearing a white, two-piece swimsuit while dancing in the rain. Hailey held a cocktail in one hand and her hat in the other as the posed amongst the greenery during the tropical storm.

She also shared some other happy snaps from the couple’s vacation, including a pic of her paddle boarding in a red bikini, and later snuggling up to her husband in a bright green two piece. Her latest post, which she captioned simply with a sparkling star emoji, came just a couple of days after she opened up to singer Demi Lovato about being called “Justin’s wife.”

“When you marry someone that is really well known, you also accept that a lot of the time people are going to be like, ‘Oh yeah, that’s blah, blah blah’s wife.’ It doesn’t bother me,” 24-year old Hailey said on the September 17 episode of “4D with Demi Lovato.” 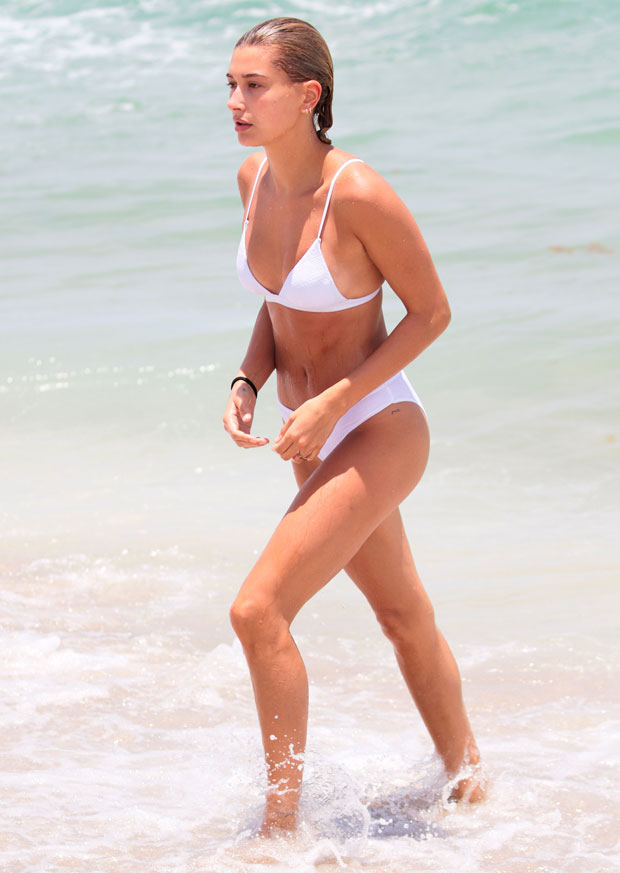 “It bothers me when people try to take it and flip it and be like, ‘People wouldn’t know who you were if you weren’t his wife.’ Because I disagree. I’m sorry, but I disagree…I have all my own work relationships, I do my own thing, I have my own job, I have my own money,” she told the Camp Rock alum. “When we split up and we didn’t talk for a very long time, I feel like I worked very hard to continue establishing who Hailey was and I still work to establish that.”

Not only has the former ballet dancer turned supermodel walked the biggest fashion runways in the world from Paris to New York, and graced the pages of countless luxury fashion magazines, but she also has a very thick skin. Most recently, a crowd of excited fans heckled Hailey and Justin about his ex Selena Gomez at the Met Gala on Monday, September 13. A TikTok video showed the famous couple walking the carpet as fans could be heard chanting, “Selena! Selena! Selena!”

Hailey’s cousin Ireland Baldwin, who is and daughter of Alec Baldwin and Kim Basinger, swiftly came to her defense. “They’re one of the happiest and most in love couples I’ve ever gotten the chance to be around. They don’t care about them,” Ireland wrote in support of her family member.