In December 2009, MTV introduced us to the cast of “Jersey Shore,” and our lives were forever changed. For six seasons we followed the lives and misadventures of JWoww, Ronnie, Snooki, DJ Pauly D, Angelina, Sammi “Sweetheart,” Mike “The Situation,” and Deena as they filmed in Seaside Heights, New Jersey, South Beach, Florida, and Florence, Italy.

In an interview with Vulture, “Jersey Shore” casting director Doron Ofir said, “Girls entered the mix because I kept saying, ‘Look, the boys preen — you know, they’re peacocks — but the girls fight.'”

In order to find out fans’ real opinions of the cast, Nicki Swift polled 605 people in the U.S., asking them who their least favorite cast member of “Jersey Shore” is. So, who is the least popular? Keep reading to find out.

This is the least popular 'Jersey Shore' star by a mile 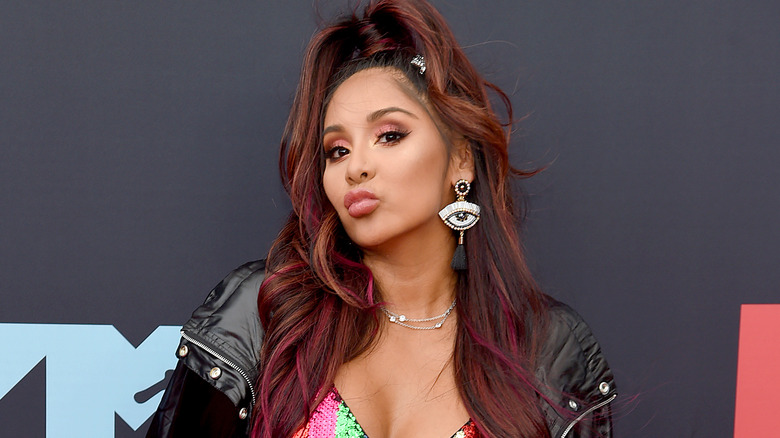 In our poll, DJ Pauly D and JWoww fared very well, garnering just 7.6% and 7.93% of the vote, respectively. Paul DelVecchio, aka DJ Pauly D, was a shoo-in for the show for one unusual reason: he owned his own tanning bed at his house, per Vulture. Jennifer Farley, aka JWoww, worked at a nightclub that regularly held auditions for MTV shows and was spotted there.

Perhaps surprisingly, Ronnie Ortiz-Magro — who has been in a lot of legal trouble as of late — received 11.74% of the vote. Angelina Pavarnick, who quit the series early on, had 18.02% of the vote, while Mike “The Situation” Sorrentino (who has had his own legal issues but is now a proud father) received 20.83%.

And finally, Nicole “Snooki” Polizzi — perhaps the most famous cast member — is the least popular with 33.8% of the vote. As the producer of the show told Vulture, Snooki showed up to the audition drunk, because it was at a bar. As fans remember, her heavy drinking was frequently featured on the series, particularly in her “Where is the beach?” arrest incident. But “what brought the house together, unfortunately,” the casting director told Vulture, “was the attack on Snooki at that bar — because suddenly, they protected her. At that moment, they became a family.”