SAINT-ÉTIENNE, France — As their country prepares to celebrate Bastille Day, Julian Alaphilippe and Thibaut Pinot were in the mood for fireworks a day in advance at the Tour de France.

Carrying the hopes of a country that has not seen a homegrown Tour winner in 34 years, the French pair emerged as the big winners of the leg-punishing Stage 8 in Massif Central on Saturday, a day on which Geraint Thomas crashed and lost ground in the defense of his title.

After five hours of exhaustion on the saddle across seven short but punishing climbs, Alaphilippe reclaimed the yellow jersey with one of his trademark attacks, while Pinot asserted himself as a strong contender for the final victory by gaining time on Thomas and others.

A spectacular rider with an aggressive style, Alaphilippe is, however, limited in mountains and has no real hope of keeping the jersey to the end. But Pinot is in the form of his life. He can compete with the best above 2,000 meters, an asset giving him hope he can succeed Bernard Hinault, who was the last Frenchman to win the Tour, in 1985.

“They’ve got some real punch,” Thomas said. “They’re the ones to watch.”

Alaphilippe abandoned his yellow jersey for just six seconds to Giulio Ciccone on Thursday at the Planche des Belles Filles ski station. He knew he had a golden chance to get it back on roller coaster terrain suiting his skills.

“I will wear the yellow jersey on Bastille Day, for a Frenchman there is nothing better,” Alaphilippe said after finishing the stage in third place, just behind Pinot.

Thomas De Gendt won the 230-kilometer (142.9-mile) trek after a long breakaway effort at the front.

With bonus seconds at play at the summit of the final categorized climb, the Côte de la Jaillere, Alaphilippe surged from a small pack of favorites near the top, with Pinot on his wheel.

The brutal attack was left unanswered, and Alaphilippe went over the mountain in second position behind De Gendt, claiming five precious bonus seconds. Working well with Pinot, they went all out in the downhill and kept the pressure on in the final kilometers leading to Saint-Étienne’s Geoffroy Guichard soccer stadium. 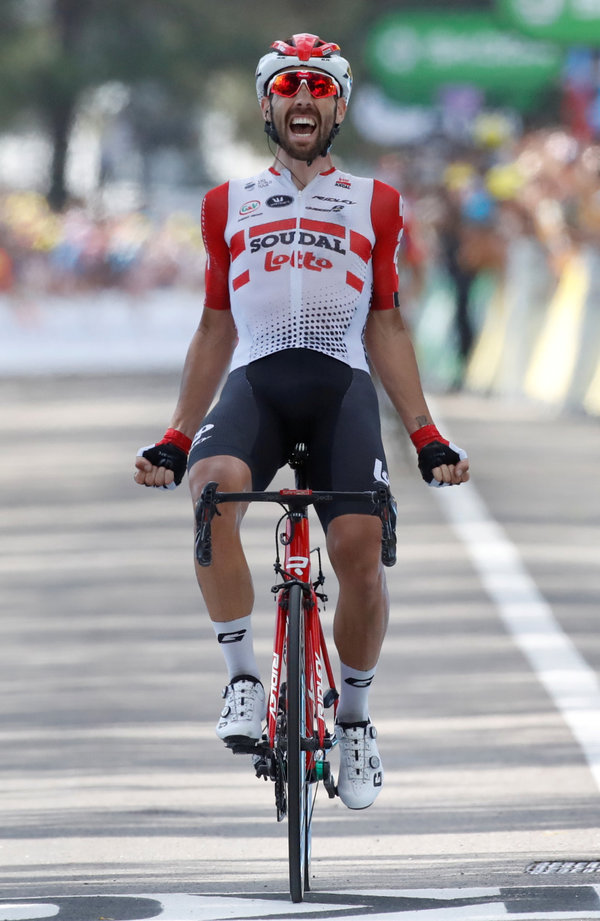 “I’ve been working hard for that, but it goes beyond my hopes,” Alaphilippe said. “This is the bike racing I love.”

Alaphilippe turned his deficit to Ciccone into a 23-second lead over the Italian, with Pinot in third place, 53 seconds off the pace.

Since achieving a third-place finish in 2014, Pinot has always struggled at his home race, and skipped it last year.

“My career goal was to win the Giro di Lombardia and stages at all three Grands Tour,” said Pinot, who won the Italian one-day classic race last year. “Since I’ve done that I’m more relaxed.”

Once back in the pack, the Welshman did not move when Alaphilippe and Pinot went away.

Thomas was involved in another crash during the opening stage last week in Belgium. This time, he said he was taken out by Michael Woods of Canada when Woods crashed going around a right-hand bend. Woods later rode in with torn shorts.

Thomas took consolation from the fact that he was able to catch up with the speeding pack, but he was disappointed Pinot and Alaphilippe got away.

“It’s just frustrating that those two got time,” he said.

Determined to shine on a day suited for “bardoudeurs” — a French word used to describe breakaway riders capable of winning on their own — De Gendt spent the day at the front. The last survivor of a four-man breakaway across the Beaujolais vineyards and the Monts du Lyonnais, he held off the peloton’s chase for his second career stage win at the Tour.

The stage took a toll on many riders, including the former Tour champion Vincenzo Nibali, who conceded 4 minutes 25 seconds. A day after his long and unsuccessful breakaway in Burgundy, the Frenchman Yoann Offredo struggled with an intestinal bug at the back while pure sprinters including Dylan Groenewegen and Caleb Ewan went through a day of suffering, just making sure they reached the finish within the delays.