CLEVELAND — Justin Verlander was scheduled to throw the first pitch of the All-Star Game here on Tuesday night. To Verlander, the ace of the Houston Astros, the baseball used in the majors now seems to be filled with plutonium, part of a secret plot by the league to increase home runs. The numbers support his suspicions, with homers at an all-time high.

Yet the man with his signature stamped on the baseball — Commissioner Robert D. Manfred Jr. — insisted on Tuesday there was no conspiracy. In fact, Manfred said, his bosses want fewer home runs, not more.

“Baseball has done nothing, given no direction, for an alteration in the baseball,” Manfred said, mentioning that Major League Baseball had commissioned an independent study last year to prove it.

“You know, the biggest flaw in that logic is that baseball somehow wants more home runs,” he added. “If you sat in an owner’s meeting and listened to people talk about the way our game’s being played, that is not the sentiment among the owners for whom I work. There is no desire on the part of ownership to increase the number of home runs in the game. To the contrary, they’re concerned about how many we have.”

That number has never been higher. Major leaguers — who are subjected to strict in-season and off-season testing for performance-enhancing drugs — are on pace to hit more than 6,600 home runs this season, which would obliterate the record 6,105, set in 2017. Four of the top five home run seasons in history have occurred in the last four seasons.

Pitchers are striking hitters out in record numbers, too. But they want answers about the ball they’re use to do it.

Verlander said on Monday that M.L.B. had turned the game into a “joke,” asserting that because the league owns Rawlings — which manufactures the baseballs — it had “100 percent” juiced the balls on purpose.

“I’m not going to disagree with him,” said the Mets’ Jacob deGrom, adding later, “I think that’s what they thought fans wanted to see. So if that was the case, I guess it’s not bad for the game. But as a pitcher, I don’t think any of us like giving up home runs.” 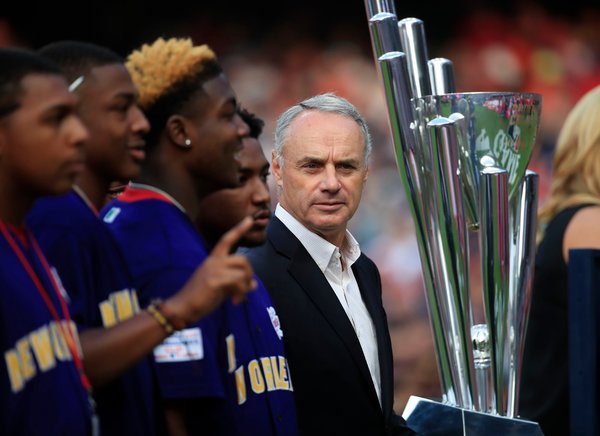 Charlie Morton, a Tampa Bay Rays right-hander, said he noticed in 2015 that he suddenly seemed to get less sink on his pitches. He adjusted by altering his pitching style — he now thrives with high fastballs and curves — but would still like to know why the ball changed.

“If the ball’s different, and intentionally different, I guess the one thing I would ask is just some transparency,” Morton said. “If the league is trying to do something different and get a different result with balls in play, I think for history’s sake and for the integrity of the game that there would be transparency.”

Statistics also affect players’ paychecks, through free agency and salary arbitration, noted Jake Odorizzi, a right-hander for the Minnesota Twins, one of four teams on pace to break the season home run record set last year by the Yankees. Odorizzi would welcome an explanation from M.L.B.

“If there’s something that’s potentially altering that, just come out and say it,” Odorizzi said. “I think, as players, we’ve gotten to the point now where we’ve accepted it.”

Manfred insisted that the league has been open about the issue, pointing repeatedly to his study, which determined that while the ball was not harder, it was producing less drag through the air. The league has struggled to identify the cause of that phenomenon, but it has tried; M.L.B. officials said their researchers had even developed lasers to study the height and width of the ball’s seams.

Yet because every ball is made with natural materials and hand-sewn in Costa Rica, they said, an array of variables is always in play. The league wants stricter manufacturing parameters to produce more consistency, but says that is not easy to achieve.

“You need to appreciate how small the variations are in the manufacturing process that can produce a change in the way the ball performs,” Manfred said, adding later, “The challenge for us is to get better control over that variation, tighten those specifications and get more comfortable with how that ball’s going to perform from year to year.”

Tony Clark, the executive director of the union, said players want to know what the league plans to do about the obvious changes to the ball. The Washington Nationals’ Max Scherzer, a three-time Cy Young Award winner, said players deserve to know what is happening.

“With the ball changing as much as it has over the past handful of years, the players have had no say in that whatsoever,” Scherzer said. “We’re left, as players, wondering why the ball can change that much, that fast, and have that big of a result.”

Scherzer has not been affected much personally, allowing just nine homers in 19 starts and leading the majors in strikeouts with 181. The active leader in home runs allowed, the Yankees’ C.C. Sabathia, said he was not concerned about the trend but did see a downside to the modern all-or-nothing game.

“The ball is a little different — whether it’s the seams, it feels a little different in your hands,” said Sabathia, who was here to be saluted by the fans in Cleveland, where he started his 19-year career. “But I enjoy offense. I want to see runs scored, and my kids love it. The thing is, though, there’s not a lot of contact on some of these teams. So it’s either home run or strikeout, and it’s kind of hard to watch.”

To thrive as a business, of course, M.L.B. needs to be as appealing to watch as possible. And while their research on the ball continues, for now their answers sound like a maddening recording from a utility company: We are aware of the problem, and we’re working hard to fix it.

In the meantime, home runs and strikeouts just keep rising. For better or worse, this is what the game has become.

“Unless there’s a solution, I don’t worry about it,” said Clayton Kershaw, the three-time Cy Young Award winner for the Los Angeles Dodgers. “There’s a lot of people that pose problems without solutions, and that just doesn’t make a lot of sense to me. Let’s figure it out — or let’s deal with it and move on.”

Tyler Kepner has been national baseball writer since 2010. He joined The Times in 2000 and covered the Mets for two seasons, then covered the Yankees from 2002 to 2009. @TylerKepner