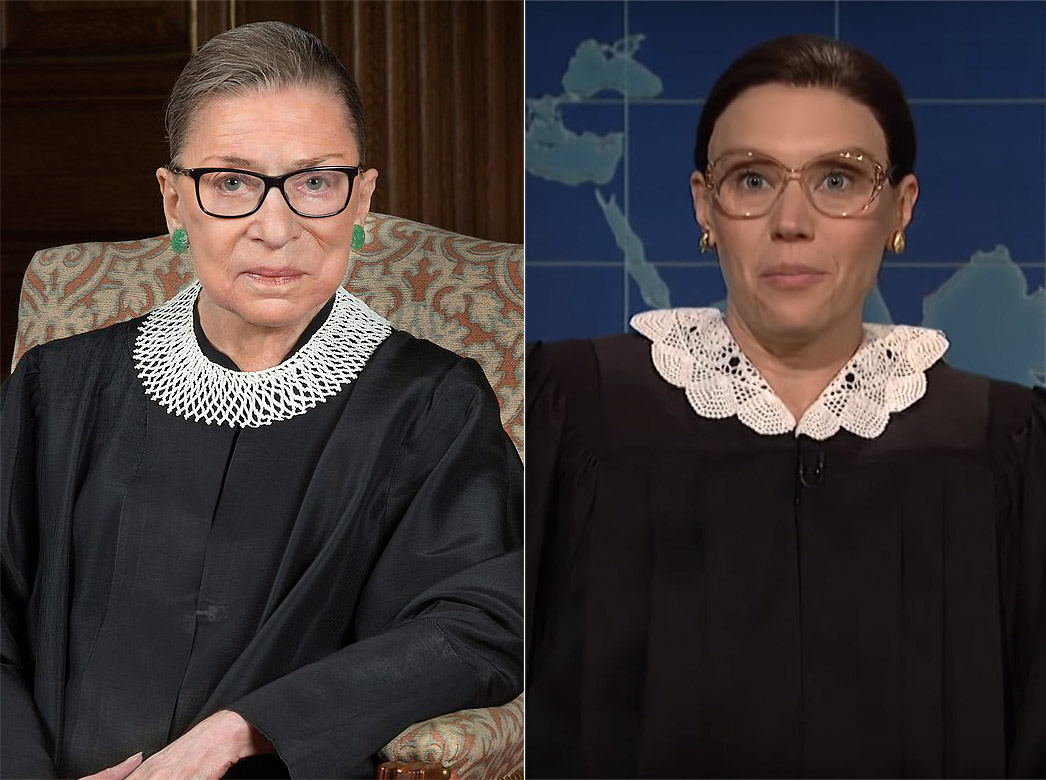 I’ve not watched Saturday Night Live regularly for a while because I’m usually in bed reading or watching something on Netflix or Hulu. I mentioned the other day that I love Leslie Jones. I’m also a fan of Kate McKinnon, and one of the people whom she’s known for playing on SNL is Supreme Court Justice Ruth Bader Ginsburg. Kate met the Notorious R.B.G. at a performance of Fiddler on the Roof and was understandably starstruck:

The Supreme Court justice ran into Saturday Night Live‘s Kate McKinnon — who famously plays Ginsburg as a feisty sprite with a stand-up’s spirit, no larger than a flea and sharper than a razor blade — when the two attended an off-Broadway performance of Fiddler on the Roof on Tuesday night, PEOPLE confirms.

“Both were incredibly gracious and kind,” a source at the scene tells PEOPLE, noting the women “raved about how much they loved the show.”

McKinnon “was star struck,” according to Fiddler actor Nick Raynor, who recorded part of their meeting in a video later shared on Twitter.

The all-Yiddish production is directed by Joel Grey, who joined Ginsburg, 86, and McKinnon, 35, on stage after the show, the source says. They also met and posed for photos with cast and crew.

“Ruth and Kate both came into the house right before the curtain rose for Act 1, so not a lot of people noticed,” the source explains. “But at intermission, word spread with the crowd and they went crazy for her, giving her a standing ovation after she came back from the bathroom. Someone even shouted ‘Rock on Ruth!’ It was electrifying.”

“These two incredible women — it could not have made me happier,” Grey, 87, tells PEOPLE. Ginsburg, whom he says he last saw at a friend’s son’s bar mitzvah a few years ago, “was generous and sweet. The audience went crazy for her.”

The video (below) of Kate being awed saying goodbye to Justice Ginsburg is incredibly sweet. Stars, they geek out when they meet other famous people, too, just like the rest of us! It doesn’t seem like the two women had much of a chance to chat, but I’d like to think that maybe someday soon they’ll meet up for lunch in D.C. or New York and Justice Ginsburg will confirm that all of the opinions that Kate offered when she portrayed the justice weren’t too far off the mark. (I know that that’s unlikely.) I’ve met a few famous people, and always make it a point to try to remain calm so that I don’t end up making myself look ridiculous, so I definitely recognized Kate’s quiet fangirling after Justice Ginsburg left. Most of the people I’ve met have been authors, though, at book signings. I was lucky to meet Toni Morrison years ago, and if you are a fan of Neil Gaiman who hasn’t yet made it to one of his events, do go, as he is lovely and gracious to everyone he chats with.