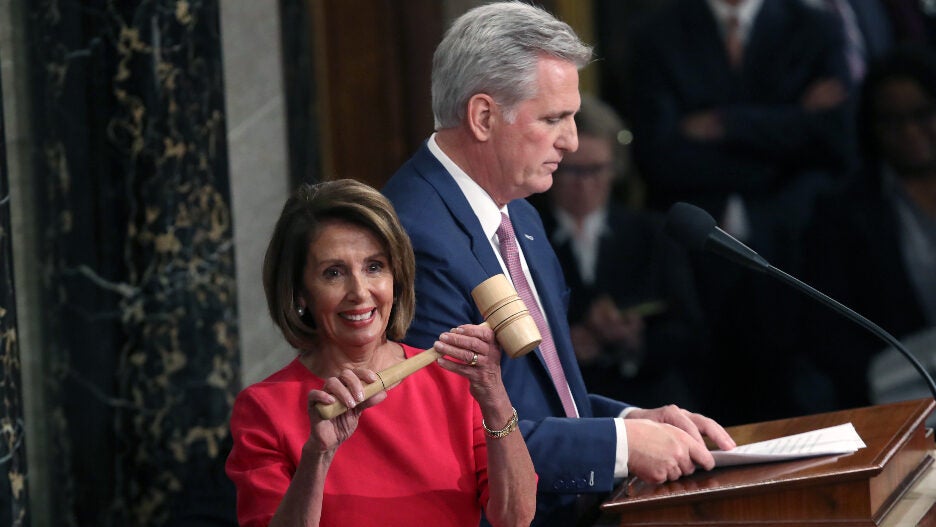 House Minority Leader Kevin McCarthy joked Saturday night that it would be “hard not to hit” Nancy Pelosi with the Speaker of the House’s gavel if Republicans take control of the House of Representatives in next year’s midterm elections.

The California congressman made the comments at a Republican fundraiser in Tennessee after he was handed an oversized gavel by his Republican colleagues from the state. Audio of his joke was recorded and posted to Twitter by Main Street Nashville reporter Vivian Jones.

“I want you to watch Nancy Pelosi hand me that gavel… It’ll be hard not to hit her with it,” he says in the audio, which you can listen to below.

The joke was quickly condemned by Pelosi’s representatives and other House Democrats, with California Rep. Eric Swalwell going as far as to call for McCarthy’s resignation.

“A threat of violence to someone who was a target of a January 6th assassination attempt from your fellow Trump supporters is irresponsible and disgusting,” Pelosi’s deputy chief of staff, Drew Hammill, added.

And Rep. Ted Lieu followed suit, tweeting, “Dear @GOPLeader McCarthy, Don’t you think America has had enough political violence? You should never be encouraging or threatening or joking about causing violence to anyone, including the Speaker of the House. You need to apologize for your statement, or resign.”

McCarthy hasn’t responded to the backlash or suggestion he resign.

Pelosi and McCarthy have had heated exchanges both in public and, according to reports, in private on a variety of topics, but most notable the formation of the House Select Committee on the Capitol insurrection attacks. Pelosi chose to reject two of the five Republicans selected by McCarthy for the committee, leading to McCarthy pulling all of his picks. Reps. Liz Cheney and Adam Kinzinger, both vocal critics of Donald Trump, are the only Republicans on the committee.