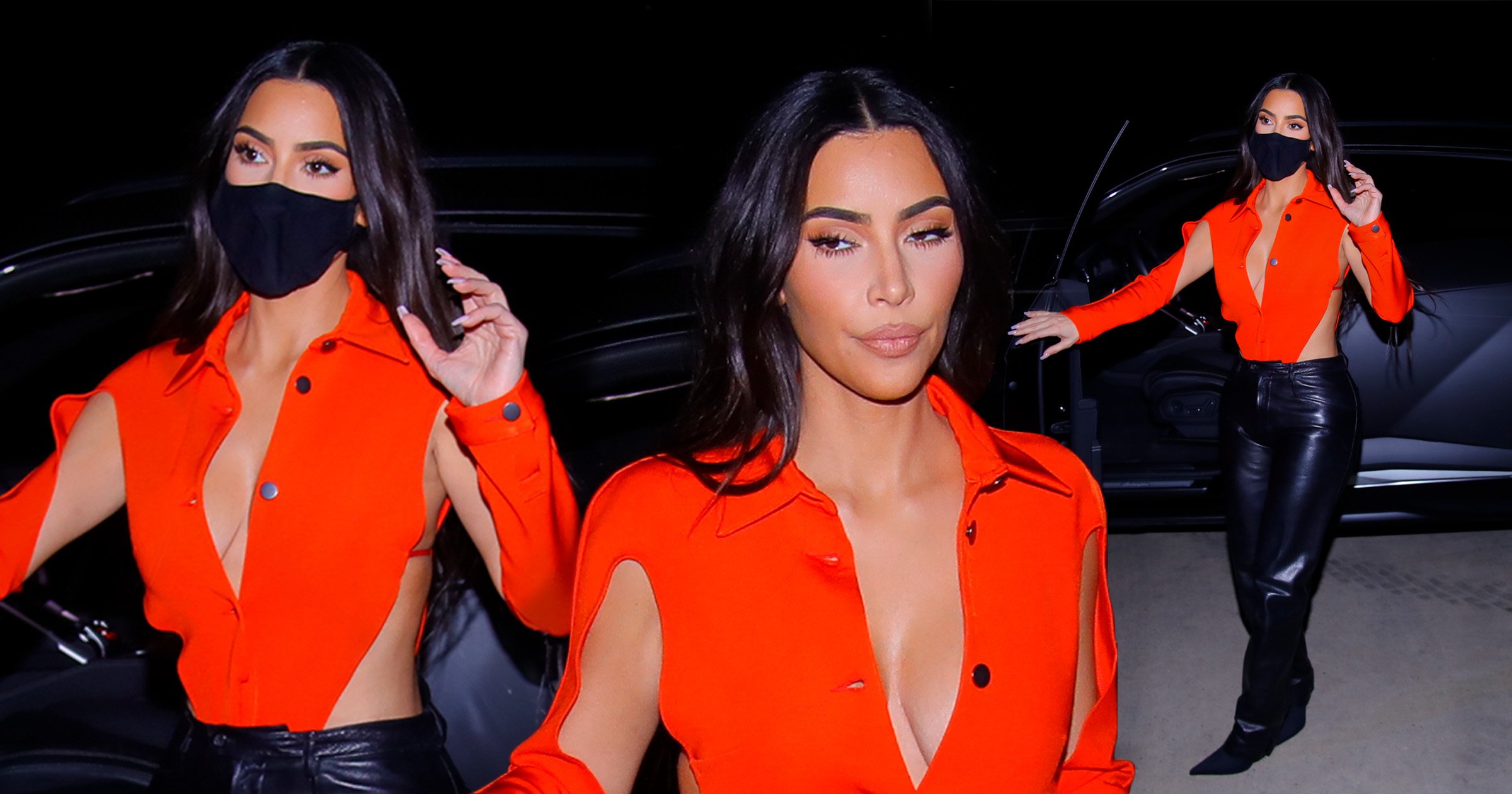 Kim Kardashian was spotted in a particularly eye-catching bodysuit as she headed to a friend’s house for dinner in Calabasas, California.

The reality star donned a bright red cut-out ensemble, with slits at the side, as she was pictured leaving a car.

Kim paired her bodysuit with a set of black leather trousers and matching high-heeled boots.

She completed her look with a black face mask, as she adhered to government guidelines amid the ongoing pandemic.

Kim’s outing comes after a flurry of confusion over her daughter North’s latest painting, with many fans left wondering if she was really behind the artwork – which has since been revealed to be valued at £10,000.

The 40-year-old had previously shared the picture of the painting to her Instagram Story on Monday, with the caption: ‘My little artist North.’

The art shows a lake with two trees in the foreground and mountains in the back, with carefully stroked reflections added to the water and painted purple and white flowers.

Kim later addressed the claims made by some that North was not responsible for the picture, writing on social media: ‘Don’t play with me when it comes to my children!!!

‘My daughter and her best friend have been taking a serious oil painting class where their talents and creativity are being encouraged and nurtured.

‘North worked incredibly hard on her painting which took several weeks to complete. As a proud mom, I want to share her worth with everyone. I’m seeing op-ed pieces in the media and social media from grown adults breaking down whether or not my daughter actually painted this!

‘How dare you see children doing awesome things and then try to accuse them of NOT being awesome!?!?!

‘Please stop embarrassing yourselves with the negativity and allow every child to be GREAT!! North West pained that PERDIOTDDDDDABCDEFGZFDT [period]!!!!!!!!’

A TikTok user also defended Kim and said she was not lying, as North’s art teacher always gets good work from her students.

And Kim also continued to make it clear to the world that North is a little artist in the making, after she was reminded of the fact that her painting talent had been revealed to the world when she was a baby.

She shared a fan’s tweet which read: ‘Hating on a kid that painted this as a baby??!!!!!!!! North been that girl,’ and then added: ‘Awwe my 1st Mothers Day present from my Northie.’

Kim later posted a video of herself holding up a Hermes leather handbag, which Noah had overed in yellow, blue and red paint with her hands.

‘I just wanted to look at this masterpiece, guys,’ the mum-of-four said. ‘This bag North painted for me and she was not even one years old. What a beautiful masterpiece.’

Kim then asked North to put her hand up to her baby handprint as she said: ‘I knew she would be such a great artist. Right North?’

It’s fair to say, North’s art skills have certainly improved over the years.