Kim Kardashian West is working on a healthy start to 2021. Before divorce rumors began to swirl on Tuesday, the mother of four took to her Instagram Stories to share some videos working out with her personal trainer, Melissa Alcantara.

She also posted a photo of two pairs of shoes, writing, “Sister Boot Camp starts this month! Plant Based and Two workouts a day for 30 days to get our mind and body right for this year!” 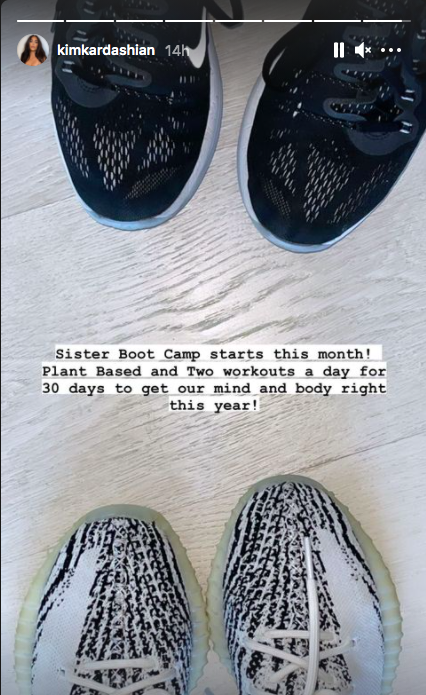 The reality star and business woman has been keeping this diet for a while now, telling one fan in February 2020 that she no longer eats meat and tries to maintain a “mostly plant based” diet.

As Kim works to better herself physically and mentally in 2021, the future of her marriage to Kanye West remains uncertain.

A source previously told ET that the KKW Beauty founder “has considered” divorcing the rapper and that their marriage counseling hasn’t made “much headway.”

“She knows what’s best for her and their kids, so if things ended she would want them to end amicably so they can co-parent together as best as possible,” a source said of Kim. “They have been living separate lives for months, so any issues they’re having aren’t a surprise to Kim’s family or friends. Kanye has been wanting to make it work, and Kim has tried for so long.”