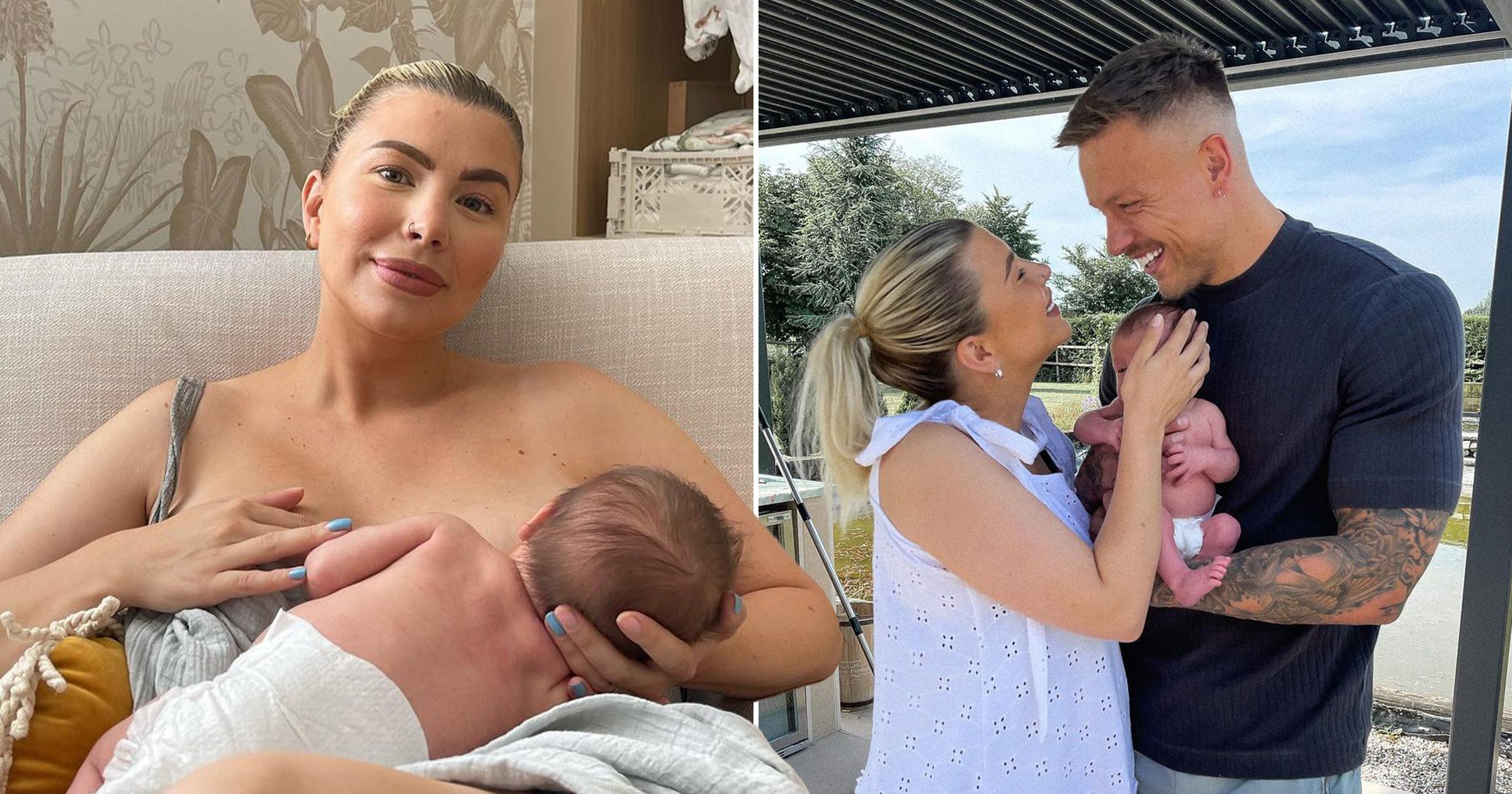 Olivia Bowen has said she felt she would be ‘so rubbish as a mum’ and never thought she would breastfeed before the birth of her son Abel.

The 28-year-old Love Island star gave birth to her first child with husband Alex – who she met on the dating show six years ago – on June 10.

Olivia really opened up her heart and soul as she talked about her experience of becoming a mother as part of World Breast Feeding Week, admitting that she never previously felt maternal and that the idea of breastfeeding initially ‘freaked’ her out.

Alongside images of herself feeding her son – with one picture showing her looking teary-eyed and emotional while lying on the floor – she wrote: ‘I never thought I would breastfeed.

‘I think where I felt like I was not a maternal person whatsoever before Abel was born, I had serious doubts it would work for me & I also didn’t even feel comfortable with the thought of it!

‘I would go as far as to say it freaked me out a bit. You all know I wasn’t sure on having kids & it’s mainly because I felt like I would be so rubbish as a Mum, not a maternal bone in my body pre Abel.

‘Fast forward to when Abel was born & he first latched in the hospital it couldn’t of felt more natural. The bond & connection I feel with him when feeding I will be forever grateful for.

‘It’s not always easy, those first few weeks the emotions are no joke. I had a couple of days where he wouldn’t latch properly & I felt like a complete failure, I felt like I was failing myself & failing him – even though I told myself before I wasn’t bothered about breastfeeding.

‘The first week I was squeezing my engorged boobs over the bath, I woke up with wet sheets from leaking & I constantly worried about how much he was getting & was it good enough?!

‘I was convinced I would stop breastfeeding after a month, then told myself 3 months & now I’m saying 6! There is no feeling like it.

‘When his little eyes look up at me & when he goes all sleepy & content. So close to you who am I!!!! I would never have imagined to be writing this.’

She said she has learnt to ‘trust the process’ and is ‘grateful’ for her ability to breastfeed.

Stars including Vicky Pattison and Love Island veterans Shaughna Phillips and Faye Winter were among those rushing to praise Olivia for her honest words.

Vicky wrote that she was ‘honestly just in awe of you’ while Shaughna joked she was ‘in Nando’s crying my eyes out.’

Love Island 2021 star Faye added that she is ‘amazing’, and quite right.

Olivia and husband Alex met on the hit ITV2 dating show in 2016 and married in September 2018, making them one of the rare couples from the programme who have remained together.

Olivia first announced she was pregnant with a post on Instagram on New Year’s Day, showing Polaroid photos of her husband kissing her baby bump, a onesie bearing the words Baby Bowen, and pictures of the scan, as well of the couple holding a pair of baby booties.

The 2016 series was won by Nathan Massey and Cara Delahoyde, who got married in 2019 and are parents to son Freddie-George and daughter Delilah.

Jamie Jewitt and Camilla Thurlow, who met on the 2017 series of the show, got married in 2020 and have a daughter, Nell, and recently announced the birth of their second child.

Their 2017 co-stars Dom Lever and Jessica Shears tied the knot in 2018 and welcomed their second child in June.

Say hello to your social lives once again – Love Island 2022 is over, with Ekin-Su Cülcüloğlu and Davide Sanclimenti being crowned the winners in an epic final.

If you missed it, don’t fret – here are the highlights of the end of a brilliant series:

For all the latest updates, visit Metro.co.uk‘s Love Island page.