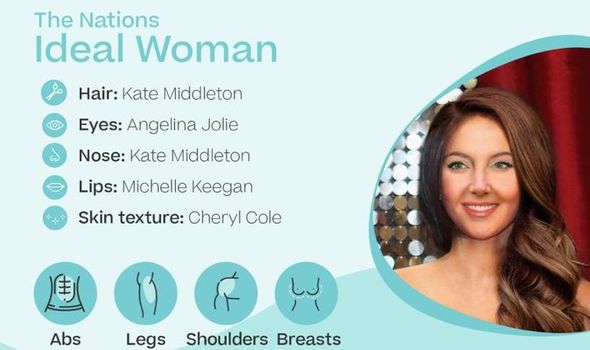 The stats have resulted in the two “ideal” bodies being mocked up, also featuring Jennifer Aniston’s arms and shoulders for women, and Tom Cruise’s eyes for men.

The Duchess of Cambridge, Kate Middleton, featured highly in the survey, with British women wishing they had her nose, legs and hair.

And Manchester United legend Cristiano Ronaldo is who men most want to look like, coming top for abs, shoulders, legs, arms and even chin.

When it comes to skin texture, George Clooney and Cheryl Cole took the crown, while Davina McCall beat women half her age in the list for her abs.

And following her recent return to the spotlight, Adele came in second place for the most wanted eyes, and third place for hair.

Cheryl Cooper, patient experience manager for cosmetic surgery providers Pall Mall, which commissioned the research, said: “It’s interesting and fun to see who the British public would love to look like, and who inspires cosmetic surgery.

“The same names appeared in a lot of the lists, showing the people we’re most inspired by – mostly Kate Middleton and Cristiano Ronaldo, suggesting men want muscles and sporting ability, while women wish for classic and timeless looks.

“It’s not unusual for cosmetic surgery patients to have been inspired by other people they’ve seen, and images of famous people help them articulate the end goal they’re after.”

It’s interesting and fun to see who the British public would love to look like, and who inspires cosmetic surgery

The study also found one in eight adults have had cosmetic surgery, with the most popular procedures being breast enlargement, hair transplants and abdominal etching.

More than a quarter have also had dermal fillers, scar removal, or correction and liposuction.

Of the 12 percent who have had work done, 42 percent were inspired by a famous person’s looks.

And four in five of those who have had surgery are open about the fact they’ve had cosmetic surgery, while 60 percent would have more done.

The main reasons behind having procedures included improving confidence (69 percent) and to feel more attractive (55 percent).

But many had surgery following a life-changing experience such as childbirth (50 percent), an accident or illness (48 percent), and weight loss (43 percent).

Prior to going under the knife people thought about it for an average of four years.

Of those who haven’t yet taken the plunge, 23 percent would consider getting cosmetic surgery – with a face or neck lift, tummy tuck and liposuction the top things they’d want done.

Social media, celebrity photos and reality TV shows are among the top inspirations for people to consider getting surgery.

A further 13 percent of those polled, via OnePoll, said lockdown inspired them to get cosmetic surgery, as they spent more time alone scrutinising their looks.

Pall Mall facial plastic surgeon, Ullas Raghavan, added: “Although pictures of celebrities and influencers are a good way for patients to articulate what they’re looking to achieve from surgery, ultimately our job is to make sure that the patient has realistic expectations and understands what is achievable.

“Most patients we see want to improve a part of their body that’s holding them back from enjoying everyday life – they have typically been considering surgery for between four to six years, and understand that it’s not something to be taken lightly.

“When this is the case, cosmetic surgery can be truly lifechanging.”

THE FAMOUS BODY PARTS BRITISH ADULTS WOULD LIKE TO HAVE: