The ‘Trollz’ hitmaker gets branded ‘rudest little madam’ by the former ‘America’s Got Talent’ judge after she claimed that a cousin’s pal suffered from adverse side effects after being vaccinated.

AceShowbiz –Nicki Minaj and British newsman Piers Morgan spent much of Tuesday, September 14 beefing after he mocked her outrageous claims suggesting a COVID vaccination made a friend impotent.

On Monday, the rapper, who contracted the coronavirus while she was preparing for the MTV Video Music Awards on Sunday, revealed she would be skipping the 2021 Met Gala in New York, due to the fashion event’s strict vaccine requirement policy.

She also shared a story suggesting a cousin’s pal suffered from adverse side effects after being vaccinated in her native Trinidad.

She was criticized by Professor Chris Whitty, England’s chief medical officer, and America’s COVID expert, Dr. Anthony Fauci, and then outspoken Morgan chimed in, tweeting, “Professor Whitty beefing with the ghastly @NICKIMINAJ (one of the rudest little madams I’ve ever met) is not the breaking news that I expected today – but it’s most welcome. She’s peddling lies that will cost lives.”

Minaj responded by insisting she had never met Piers, writing, “Sir I’ve never met you. I know… we all look alike. ‘Rudest little madam’. I like it. Has a special ring to it. Thanks Pierce [sic].” 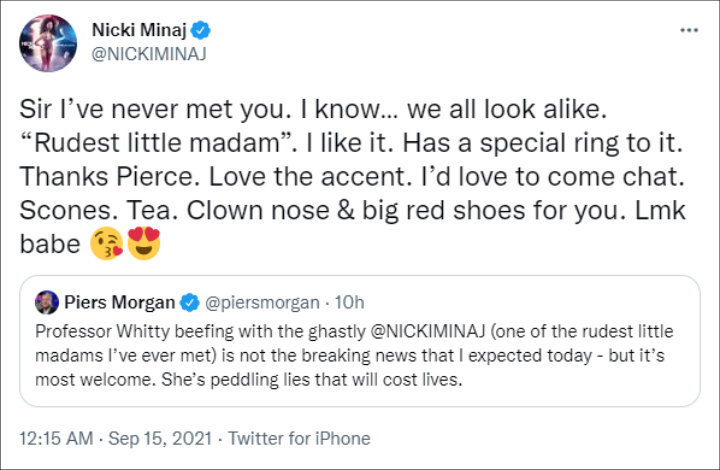 Morgan then reminded Nicki he met her when she performed on “America’s Got Talent” when he was a judge on the show. 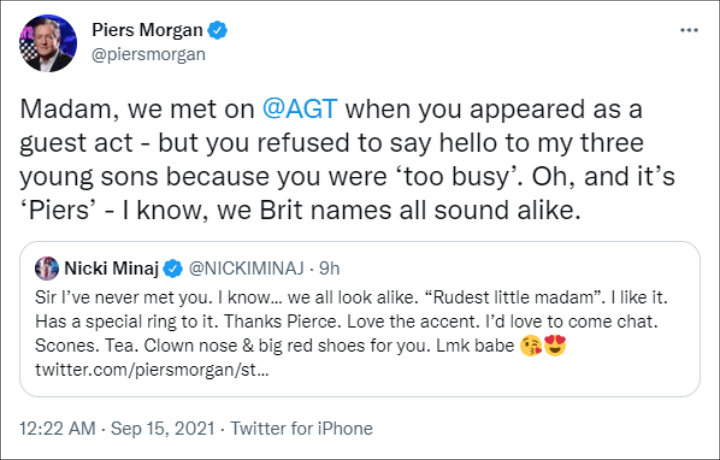 “Madam, we met on @AGT when you appeared as a guest act – but you refused to say hello to my three young sons because you were ‘too busy,’ ” he wrote. “Oh, and it’s ‘Piers’ – I know, we Brit names all sound alike.” 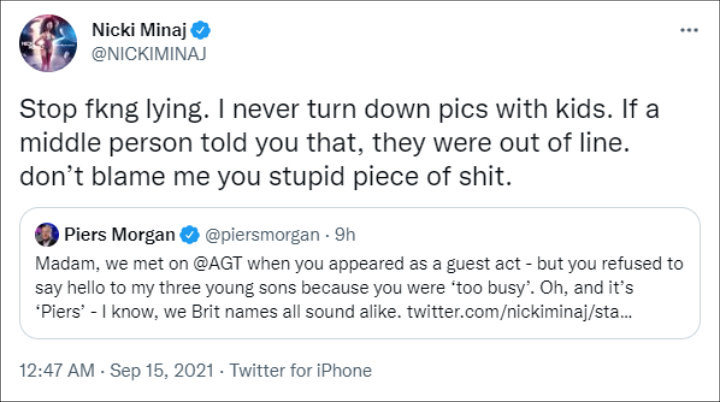 Things then got a little heated as Minaj told the former CNN host to “stop f**kng lying” and then insisted one of her handlers would have been responsible for saying no to a meet and greet. “Don’t blame me you stupid piece of s**t,” she snarled.