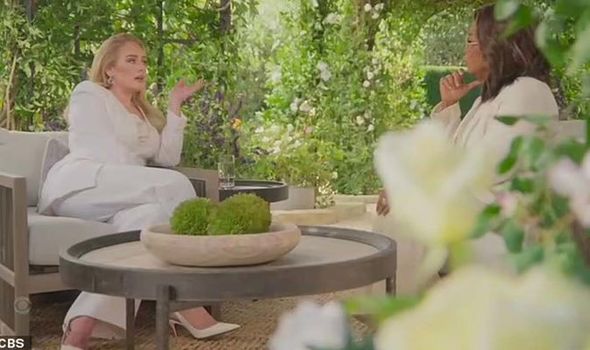 The superstar singer fought back tears as she told Oprah Winfrey her split from husband Simon Konecki was “inevitable”. She said the break-up in 2018 followed the pattern of her parents’ failed relationship.

Her late father Mark Evans left Adele’s mum Penny when the Someone Like You chart-topper was three.

She told Oprah – in the same rose garden where the chat show hostess interviewed the Duke and Duchess of Sussex – that his absence from her childhood had shaped her later relationships.

She ended up hurting partners as a defence mechanism to avoid being damaged.

Adele, 33, spoke of “my dad’s absolute lack of presence and effort”, adding: “I finally understood that it was the alcohol… it took my dad from me.”

The alcoholic former plumber died in May aged 57 after fighting bowel cancer. He had long acknowledged that he had been a “rotten father” to Adele but they were reconciled shortly before his death. She said his death made her address her relationship with alcohol: “Once I realised I had to do a lot to work on myself, I stopped drinking.”

In the emotional two-hour interview, Adele revealed her relationship with sports agent Rich Paul, 40, was “very smooth” but she was “embarrassed” by her divorce from Simon Konecki.

She said it left her with “terrifying anxiety attacks” which led her into an exercise regime, losing seven stones in two years. “The anxiety paralysed me and made me so confused because I wouldn’t be able to have any control over my body,” she said.

Noticing that her anxiety eased at the gym, she went every day: “That really contributed towards me getting my mind right.”

Explaining her break-up to son Angelo, now nine, was traumatic she said: “The hardest part [was], trying to explain to a six-year-old that I do love him [Konecki], I’m just not in love with him.

Adele said she still spends a lot of time with Konecki, 47, and he remains a pivotal part of her life. She credits the entrepreneur with saving her life when she shot to fame, by giving her stability.

She said she was not fazed by criticism for losing so much weight “because my body has been objectified my entire career. I’m either too big or too small”.

The prime-time CBS show marked Adele’s first TV interview about her latest album 30, which is out this week.