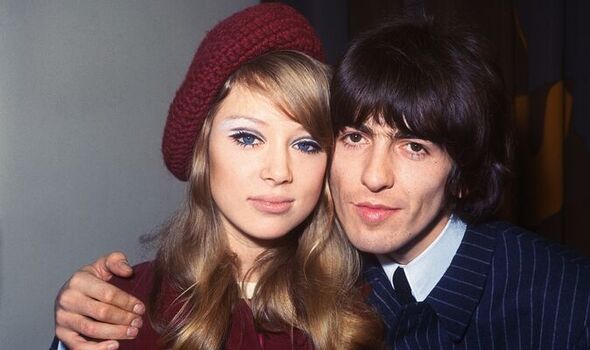 It’s every day that you meet a bonafide Sixties icon. But if anyone is, it’s Pattie Boyd: supermodel, musicians’ muse, photographed by star snappers such as David Bailey and Terence Donovan. Then there’s the cherry on this Sixties-tastic cake – marrying George Harrison, the best-looking Beatle, although the “Paulites” may disagree.

Pattie is chatting to me via Zoom from the West London flat she shares with third husband Rod Weston when they’re not living at their main home in Sussex. Aged an unbelievable 78, she’s looking as chic as ever, those famous lustrous blonde locks tumbling over her shoulders, trendy tortoiseshell specs framing her blue eyes and sporting a crisp-looking, stripy shirt.

Her new book, My Life In Pictures, is a visual treasure trove featuring more than 300 photos and artworks with Pattie sharing intimate access to her personal archive for the first time. It must have been a labour of love deciding which images to include?

“Oh, it was,” she laughs. “I had so many photographs in my own portfolio from my modelling days. Also, the editor of the book found lots more photographs I don’t even remember posing for. Then there are the photos I’ve taken myself over the years. I kept sending him more and more and more.”

The anthology includes many images of close friends and contemporaries such as Twiggy, David Bailey, Mick Jagger and Billy Preston, her second husband guitar hero Eric Clapton and, of course, The Beatles and George. The latter brings back cherished memories of the man she has called “the love of my life”. One picture in particular sparks fond memories.

“We’re in the Himalayas and it’s of George lying on his back after we’d spent the afternoon meditating. It must have been late 1967,” she says. “It’s such a beautiful image. He looks so relaxed and calm and peaceful. It’s probably the last time I ever saw him looking that way for a very long time. We were about to head back to London for business meetings – Apple Records having just been launched.

“From now on, The Beatles would be businessmen as well as musicians, with them having to involve themselves in a world they knew little about. It was something that was alien to George.”

Pattie met George in 1964 when she was cast as one of the schoolgirls in the first Beatles’ film, A Hard Day’s Night.

“My friends and I loved The Beatles’ music, and I was very excited when I realised what the job was,” she recalls. “But never, ever did I think I would end up marrying one of them. I sat next to George at lunch and he was so sweet and good-looking and funny as he chatted away.

“At the end of the day, he asked me to go out with him that night but I had a boyfriend whom I was seeing that evening so I told him I couldn’t – although I did invite George to join us, which, not surprisingly, he wasn’t interested in doing. And that would have been that if the director Dick Lester hadn’t recalled us for another day’s filming about 10 days later. By then, I’d split up with my boyfriend. On set, I made a beeline for George. He asked me how my boyfriend was, I told him I no longer had one and he asked me out that night.And that was it!”

Surely, it can’t get much better than being 20 years old in the Swinging London of 1964, a beautiful, successful model and newly in love with the most famous band in the world’s gorgeous guitarist?

Was Pattie aware at the time that she was living the dream? “I was having a wonderful time but wasn’t always aware that I was in the middle of what is now regarded as a pivotal time in history,” she replies.

“It’s only when you look back that you realise things like that. I didn’t look at my friends and constantly think, ‘Oh my goodness, you’re so famous!’ It’s only when I’m doing things like putting this book together or talking to people like you that I realise what an incredible time it was to live through. It was all so new and exciting, and anything and everything seemed possible. At the time, I thought it would last forever.” It didn’t, of course.

The Swinging Sixties gave way to the troubled Seventies and Pattie’s marriage was among the casualties. By 1974, her marriage to Harrison was over in large part due to his infidelity. She began a relationship with Eric Clapton whom she would later marry. She and the ex-Beatle managed to stay friends, though.

“We remained close until the end of his life,” she says. “A few months before he passed away in 2001, he came to see me in Sussex. I thought he wanted to see where I lived. He brought me some little gifts, played me some music and we had tea together. It was so lovely.

“When he left, I realised I might never see him again. I knew he was ill and, on reflection, it was like he’d come to say goodbye.”

Harrison would die aged just 58 in November of that year, his family around him, from a very aggressive form of cancer.

Pattie continues: “We’d been so young when we met and it was like we’d grown up together. We’d learned about music, culture and faith – not just in the UK but all over the world. It’s wonderful to have grown up with George – he was so adorable and so open to everything.”

While her book is mainly an anthology of images, her accompanying diary entries and reminiscences are incredibly vivid.

Another entry reads: “Does your silence mean be gone?” It is a telegram from a clearly heartbroken Eric Clapton. The Slowhand star penned Layla and Wonderful Tonight in her honour.

Harrison, of course, wrote “Something” for Pattie – the track that’s been described as one of the greatest love songs ever. She also inspired several other Harrison compositions, including I Need You, If I Needed Someone, Love You To and For You Blue.

“Aren’t I lucky?” she smiles. “It’s an absolute honour to have inspired such iconic love songs. If I happen to hear one of them come on in a shop or restaurant or whatever, it gives me such an incredibly warm feeling.”

Speaking of shops, she recalls, “I happened to be in an opticians in Notting Hill the other day and mulling over which colour frames I should get for my new glasses when this rather tall, gorgeous-looking young man approached me. ‘Excuse me,’ he said. ‘I just wanted to introduce myself. I’m Paul McCartney’s grandson’. I couldn’t believe it. To think Paul has a grown-up grandson – and so handsome, too. It just blew me away. Where have all the years gone?”

Where indeed. Looking back over her extraordinary life, does Pattie have any regrets?

“I thought that, naturally, when I grew up and got married, I’d have children,” she says.

“Sadly, it didn’t happen for me. Once you come to terms with that fact, it takes a while to get a grip on reality and bite your lip.

“Once you get over that, you come to the realisation that you’ve got great friends and life is fabulous. I believe that we can’t force nature. Whatever happens in life is meant to happen. So, I don’t have major regrets, no. Just accept what comes into your life and deal with it in a proper way.

“I hate anger and negativity – they can make you ill. I take life as it comes to me. I digest it and then do something about it. Or I don’t. I’m quite proactive and I like to do things immediately – but I’m learning to hold back and not be quite so spontaneous.

“I decided very early on that there never needed to be a dull moment in life. If you find yourself feeling dull, just change your mind.”