While there were some shocking revelations revealed in Prince Harry and Meghan’s Netflix docuseries, the couple also shared a sweet insight into their family life.

The Duke and Duchess of Sussex are parents to three-year-old Archie and one-year-old Lilibet.

In episode six of Harry & Meghan, the Prince revealed which side of the family his children take after, which you can see in the video below.

“Sort of like golden reddish hair,” Harry added of his daughter, as home footage showed Lilibet wearing a floral romper and crawling across the Sussexes’ garden in Montecito.

LATEST: How to watch Prince Harry’s Anderson Cooper interview from the UK 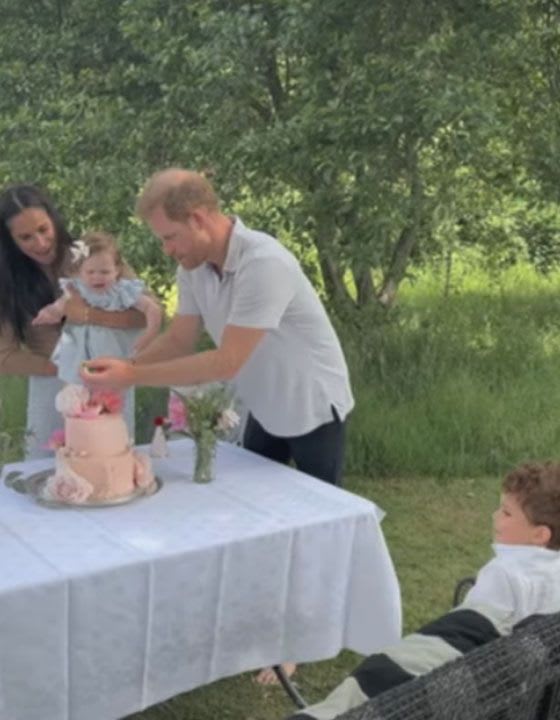 Lilibet Diana Mountbatten-Windsor was born on 4 June 2021 at Santa Barbara Cottage Hospital in California. Her birth and her full name were announced by Harry and Meghan two days after the birth.

The tot, who is named after her late great-grandmother Queen Elizabeth II, celebrated her first birthday in the UK last year as the Sussexes returned to London for the Platinum Jubilee.

All you wanted to know about Royalty and more! Listen to our brand new podcast all about the royals.

Footage shared in the Netflix series showed Harry and Meghan hosting a birthday party for their daughter at their UK residence, Frogmore Cottage.

The Duchess holds Lilibet in her arms as she and Harry sing Happy Birthday and blow out candles on a beautiful tiered pink cake that was created by their wedding cake baker, Claire Ptak.

Harry and Meghan first became parents in May 2019 with the birth of their son, Archie Harrison Mountbatten-Windsor. He was born at the Portland Hospital in London and made his public debut to the world during a photocall at Windsor Castle three days after his birth.