‘House of Gucci’ star Salma Hayek celebrated the release of her film with a sexy one-piece Gucci swimsuit.

Salma Hayek’s post-Thanksgiving uniform includes a one-piece swimsuit. The actress, 55, shared a snapshot from the pool on Instagram on Monday, Nov. 29 in a black Gucci swimsuit. She captioned the post, “This is not my wardrobe for ‘House of Gucci’ but I highly recommend it anyway.”

The star has been living in swimsuits as she rests from promoting not one but two new films. Salma, who stars in the recently-released House of Gucci and Eternals, recently shared a snapshot in a blue one-piece bikini as she enjoyed a nap on a hammock. “Nothing like a hammock siesta to recover from promoting 2 movies back to back.”

Salma stars as Ajak in Marvel’s Eternals, out since Nov. 5. The film follows a group of immortal beings with superhuman powers who have secretly lived on earth for thousands of years. The group reunites to fight the evil Deviants led by Salma’s Ajak. Angelina Jolie, Gemma Chan, Kit Harington, Richard Madden, Kumail Nanjiani, and Brian Tyree Henry also star.

Salma told the Los Angeles Times that she was “surprised” to receive the call to star in the superhero film. “I was very surprised,” she said. “A superhero? Me? It was so confusing… I couldn’t understand how I got there. It’s like all your dreams coming true.” The star said it was humbling to be approached. “Sometimes what moves you really hard are the things you least expect,” Salma said. 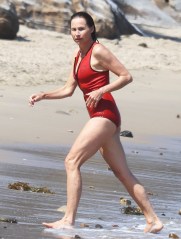 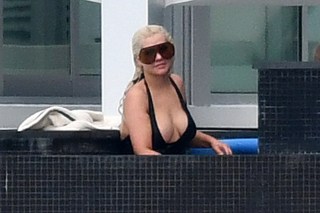 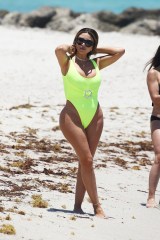 “If you reject me, and you tell me, ‘You’re no good,’ I’m not gonna cry. But in this moment, where I felt seen and accepted, immediately it made me feel something and it made me want to cry — but I didn’t, I held it in,” she continued. “They came and got me. In my 50s. Arab-Mexican. [A] curvy woman. Not your typical superhero. Especially not one that was male [in the comics].”

In House of Gucci, out since Nov. 24, Salma swaps her superpowers for tarot cards, starring as Giuseppina “Pina” Auriemma, a psychic who becomes Patrizia Reggiani‘s (played by Lady Gaga) confidant. In an interview with Variety in May, Salma gushed about her “incredibly talented” and “extraordinary” co-star. “Her level of commitment — I’ve only seen maybe once or twice somebody commit to a character like she does,” she said. “And she’s also a great team player.”

Salma also reveled in filming in Italy for the project. “I was in Italy and it was like a dream come true,” she said. “You’re in Rome and you’re in a movie and it’s the rounder you are, the better it is for your character. That to me was nirvana. I swear I would order with a smile on my face: ‘I’ll have the pasta again.’ I love pasta. And it would come and it would be like guilt-free and — Oh, my God — it was delicious.”