LONDON — It had all the hallmarks of an afternoon of speed dating. Strangers hoping to find that right match.

On a gloriously warm Tuesday this week, a group of soccer executives, from clubs large and small from across Europe and even as far afield as Brazil and the United States, were getting to know each other at 15-minute intervals inside a banquet hall at Stamford Bridge, the West London home of Premier League giant Chelsea.

Outside, tourists visiting the stadium frolicked in the sunshine of the stands. Inside the cloistered, carpeted Centenary Lounge, executives were getting down to the serious business of negotiating player trades as the summer transfer window, an annual multibillion-dollar marketplace, reaches its climactic rush to fill rosters or find new or temporary homes for unwanted or untested talent before the window slams shut in a matter of weeks.

With tables numbered and organized in rows, executives wielding brochures and tablets showed off their inventory in short introductory meetings that ended with the sound of a bell and the appearance of two women armed with boxing-style cards announcing the start of the next round of talks.

The event, a novelty in the often opaque and secretive world of soccer player trading, is the brainchild of Jonas Ankersen, 33, of Denmark, who launched a player trading platform called Transfer Room two years ago. The idea was to wean clubs off the largely inefficient and long-held practice of sourcing and selling players via the closely guarded networks of agents or intermediaries, some who can take a multimillion-dollar cut in the biggest deals.

“I wanted to give the clubs a chance to take back control of the transfer market,” Ankersen said as snippets of negotiations started to fill the air following a break for lunch.

To be sure, this is not the place where Cristiano Ronaldo or Lionel Messi will move from one club to another, but rather where useful, reasonably priced players change teams. The most expensive player on Ankersen’s platform is valued at around £20 million, or roughly $25 million, he said.

“That’s just a little bit out of our price range,” said Mick Harford, the director of football at Luton Town, a team from just outside London that was promoted last season to the second tier Championship division. Harford spoke as he pored over a list of young players being made available for loan by Paul Konchesky, loan manager at the middling Premier League club West Ham.

Harford, a towering former striker, was in the market for players elite teams were looking to loan out — either young players needing the experience of first team soccer or older athletes who were unlikely to make the roster this season. The loan market is a backbone for clubs like his, Harford said.

Executives in the room included representatives of Manchester City, last season’s Premier League champion, and Italian champion Juventus, which each summer is among soccer’s biggest buyers of talent. Juventus is also known to send more players out on loan than almost any other rival in European soccer. They were joined by a dozen other Premier League clubs and a bevy of others from across soccer’s global pyramid, including Internacional, a stalwart of Brazil’s top league, known for creating the type of talent suited to European soccer. 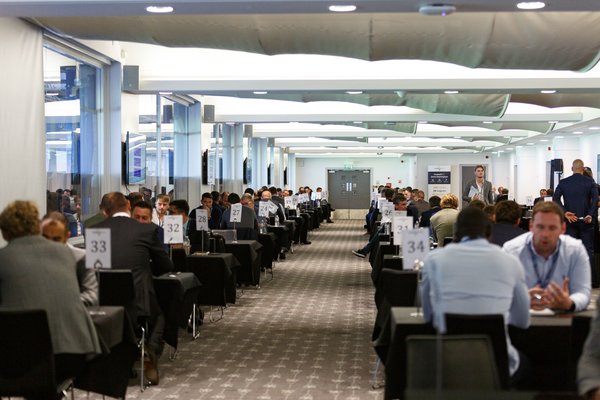 While the executives ranged in seniority and function, they were all club employees. They shared a mutual frustration, bordering on antipathy, for another critical cog in the wheels of the soccer market: agents.

“If you can progress talks with the two clubs then you’re in a stronger position than an agent trying to broker deals, getting in this, getting that,” said Tony Coton, head of recruitment at Sunderland, a third-tier English team that was previously in the Premier League but was demoted twice.

“Here I will hear it from the horse’s mouth now,” he continued, “exactly how much the player’s earning at that club and I can say, ‘Yes we can go to that,’ or ‘No we can’t go to that,’ without the agent getting involved because invariably the agent will inflate what he’s on to try and increase his wages and for a loan I don’t think that’s right.”

Coton, a former goalkeeper for Manchester City, was in town like Harford to pick up a few loan players and to try to find buyers for two players from Sunderland’s Premier League days whose wages the club can no longer afford to finance.

Fueled by an explosion in television rights revenue, the player trading market globally has doubled to $7 billion annually since 2014, according to FIFA, a rise that requires a more organized and serious approach than the relationship-based business that has historically existed, according to Rasmus Ankersen, Jonas’s brother, and the director of football at Brentford, which plays in England’s second-tier Championship division.

That informal structure has led to waste of as much as 10 percent, Rasmus Ankersen said, which would represent as much as $700 million based on FIFA’s total figures. The savings, he said, could come with more transparency in the marketplace, with clubs more easily knowing which players are available and the needs of other teams.

“There will always be a need for someone to represent the player, an agent, and who can market the player, negotiate his contract. Where the waste in football is, is in what we call ‘club intermediaries’ — these guys that are in the middle, connecting clubs, holding the information, brokering the deals, that is in many cases an unnecessary cost,” Rasmus Ankersen said.

Club-to-club meetings on a global scale like the one held in London remain uncommon. The scarcity is related to the baked-in paranoia of the soccer world, where clubs eye rivals’ motivations with great suspicion.

“If you stick a for sale sign up, you can weaken your stance in the market,” said Dan Ashworth, director of football at Brighton, a small club that will compete in the Premier League for the third straight season.

Ashworth has recently returned to club soccer after six years with England’s national federation. His club hired a new coach, Graham Potter, at the start of the season, and that’s likely to mean more changes than usual as Brighton tries to build a squad matching Potter’s preferences. When such changes occur, players who would once have been seen as indispensable may no longer fit. Such conversations can be delicate, requiring careful handling before a player’s availability for transfer can be communicated to the market, said Ashworth.

“You are dealing with human beings, it’s not a product,” he said, sitting in the calm of a quiet corner of Stamford Bridge, during a rare lull in a full day. “So when you put a for-sale sign up for a person, that person might not know they’re for sale, might not know that you’re looking to move them on, might not agree to move away. Sometimes they do, sometimes they don’t.”

A short while later, the bell sounded and Ashworth jumped to his feet. He had another date.