When “Stranger Things” hit Netflix back in 2016, it became an instant hit, and the young stars of the show were instant celebrities. For the grown-up actors like Wynona Ryder, who already had varying levels of fame when the show premiered, it was a career boost. But for the kids, it was all brand new. Especially for Millie Bobby Brown, who was just 12 years old at the time, per Elle UK, and a fan favorite from the jump. Her character, Eleven, was so intriguing, fans became instantly obsessed with her.

While it might look like fun to be a celebrity, Brown told Glamour UK in 2020 that it’s actually made her life a lot harder. “I struggle with anxiety and in some ways, this has hindered it,” she said. “When I’m having a bad day or I’m feeling very anxious, some things like when people say, ‘Oh, you looked bad at this award show because you looked like this or you looked like that,’ make me a little bit more anxious.”

Being a teenager in the public eye cannot be easy and considering how child stars can crash and burn in Hollywood, her co-star, David Harbour is concerned about her well-being in the spotlight. Here’s more on why he’s worried. 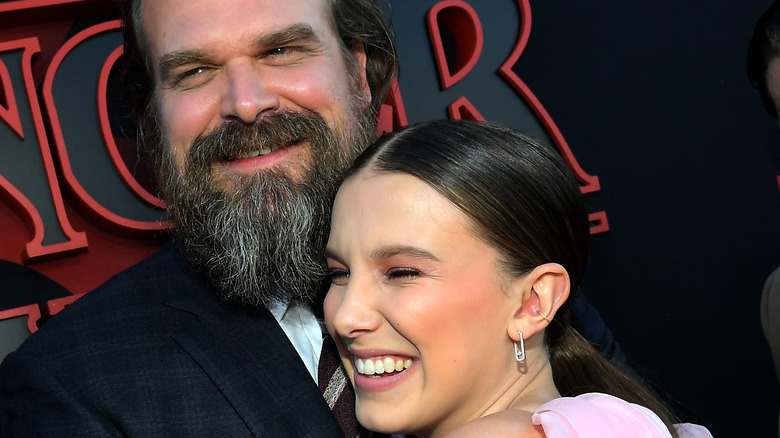 David Harbour plays a father figure to Millie Bobby Brown’s “Stranger Things” character, and they apparently have gotten very close over the years on-set as well. He said on the “That Scene with Dan Patrick” podcast in July that he takes their relationship seriously and tends to keep an eye on Brown, just in case. Harbour said, “Millie and I have always had sort of a special relationship because I knew her when she was so young. I knew her before any of this big fame hit.” He added, “I have a real protective feeling for her. I have a real, like, worry. I worry about her and the fame and all that she has to struggle with.”

That’s not to say that anything is particularly wrong with Brown, but that he seems to be concerned in a healthily protective way. “I’ve just always felt this kind of deep fatherly affection for her,” he added.

It’s not easy being a teenager in the first place and to do that in the public eye, with all the scrutiny that comes with it, makes it even harder. Still, there are upsides to fame, such as booking more gigs as an actress. While the world waits for the next season of “Stranger Things,” Brown has consistently been working on new projects, per her IMDb profile, so at least she’s keeping busy. And hopefully avoiding the stress-inducing haters in the process.