Jazz Jennings first made headlines after she came out as one of the youngest transgender advocates at 6 years old during a Barbara Walters interview in 2007. According to Jennings’ parents, she knew her assigned gender at birth was incorrect, as she turned her onesies into dresses. As Jennings articulated to Walters, “I have a girl brain in a boy’s body.” After her whole family starred in the 2011 OWN network documentary “I Am Jazz: A Family in Transition,” a 14-year-old Jennings landed her own TLC series, “I Am Jazz,” chronicling everything in her transition, from her gender confirmation surgery, to milestones like having her ears pierced.

Beginning high school at the time of the show’s launch, Jennings was candid with ABC News about her nerves. “I’m a little bit worried because I’m not sure if people are going to be fully accepting,” she said, noting, “I’ve noticed that boys are less accepting than girls.”

When asked why she decided to share her journey on camera, Jennings emphasized the importance of advocacy, saying, “I just want to be as open as I can. It will show other people that being transgender… is OK, it’s not something negative at all. It’s something that I embrace, that my family embraces, and we just live our life, we face the challenges, we conquer them and we move on.” In June, the now-20-year-old activist is opening up about another sensitive body image topic. Keep reading for what Jennings shared about her recent weight gain.

Jazz Jennings is holding herself accountable during her weight loss journey 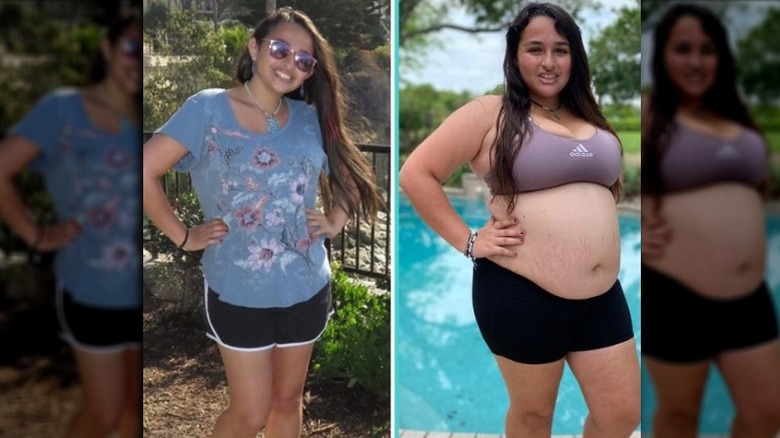 Posting before-and-after images to her Instagram, Jazz Jennings shared her struggle with binge-eating disorder (BED) on June 18. “Over the past few years, I have gained a substantial amount of weight,” Jennings wrote, describing BED as “a disease in which I’m not only addicted to food, but I eat it in large quantities.” The “I Am Jazz” star revealed that her disorder “caused me to gain almost 100 pounds in a little less than 2 years,” adding that her medications added to her increased appetite.

“I’m posting this photo because it’s time for me to address my weight gain and hold myself accountable… I’m ready to take the initiative and create positive changes when it comes to my health and body,” the 20-year-old stated. Jennings added that while she has a “fabulous team” of professionals and loved ones providing support, she has “to be the one committed toward bettering myself.” Thanking her followers in advance for “understanding,” Jennings garnered massive support from other public figures in her comments. “Sending you love and support Jazz. We are cheering you on!” Katie Couric wrote. “THE VULNERABILITY IS BREATHTAKING!!… Thank you for speaking on this,” praised transgender actor Zoey Luna.

In February 2019, Jennings spoke to People about losing 30 lbs prior to receiving her gender confirmation surgery. “I used food as a comfort for my emotional struggles. I was a binge-eater. It was really bad.”

If you or someone you know is struggling with an eating disorder, please contact the National Eating Disorder Association’s Helpline at 1-800-931-2237 or chat with one of their helpline volunteers on NEDA’s website.