The central couple of Netflix’s To All The Boys movie series is obviously Lara Jean Covey and Peter Kavinsky. But you could argue the true love story of To All The Boys is the friendship between Lana Condor and Madeleine Arthur. The duo, who play Lara Jean and her quirky best friend Chris, respectively, are just as cute IRL as their on-screen counterparts.

Case in point: The special acting ritual they developed while filming To All The Boys. "When we’d start a scene, [Lana and I] liked to pretend to turn on our ‘acting buttons,’" Arthur tells Elite Daily. "We’d poke each other’s shoulders and go, ‘Boop. You’re on.’ And then we do it to each other and go, ‘We’re on.’"

With the newly-released final installment of the To All The Boys trilogy, titled Always & Forever, Arthur knows her life is about to change even more. But one thing that won’t? Her bond with Condor. "She’s one of my best friends in the world," she says.

As for things that will change, Arthur is ready to embrace whatever kind of career-altering roles Hollywood throws at her. "I think as an actor, that’s the best thing, to play a different type of character," she says. "My dream is to one day do a French movie. I’d love to do a period piece — whether that’s the 1970s or the 1570s, I’m game for either — and just to play a variety of roles that are in all genres and are complex and whole and dynamic humans."

A quick peek at Arthur’s Instagram proves her versatility. Below, she gives the deets on three of her most memorable online moments, from a Tokyo getaway to putting her own spin on The Notebook.

This interview has been edited and condensed for clarity. 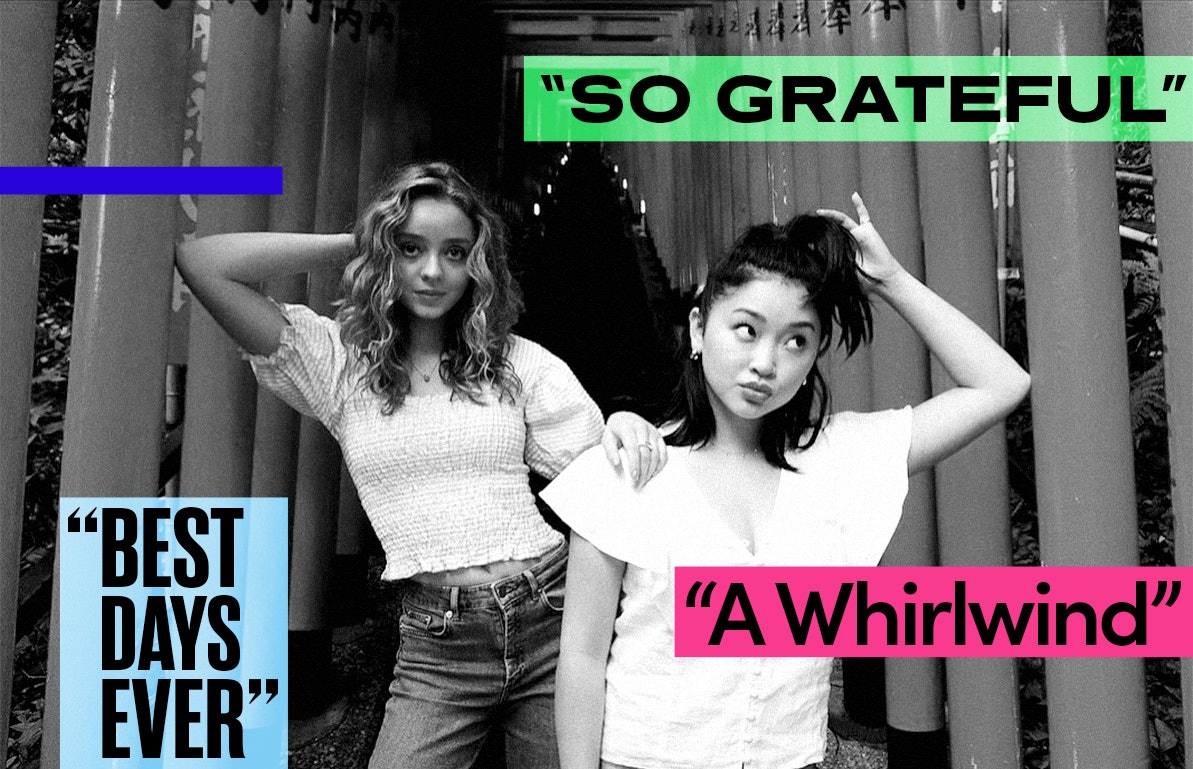 Elite Daily: Where and when was this photo taken?

Madeleine Arthur: That was taken in Tokyo, end of August 2019. It was the end of our first full day there. We went to the highest shrine and it was gorgeous. The photo is taken by [Lana’s] boyfriend Anthony [De La Torre].

ED: How did this trip come about?

MA: That came about before [To All the Boys: Always & Forever] filming started in Korea. We had talked about how we dreamed about going to Tokyo and were able to fit in going to Tokyo before Korea. I was able to tag along and it was the best. It was a whirlwind. We were there three days. They were some of the best days ever. We ate a lot of food in Tokyo. We got to make our own sushi, which was so yummy. We did yakitori [and] ramen. We’re all very much into our food.

ED: How did you and Lana become so close?

MA: We hit it off right away. That was the beauty of doing the first movie and becoming good friends and then having the opportunity for the second and the third. We spent so much time together on weekends. We were always getting lunch or dinner and we just continued to bond. I’m so grateful the movies brought us together. Hopefully, maybe, one day we’ll get to do it again.

ED: Now that TATB is over, how are you keeping up your friendships with Lana and your other co-stars?

MA: Now that the movie has ended and due to COVID, Lana and I have done a lot of Zoom cooking sessions. We’ve made fresh pasta, we’ve made homemade dumplings. It’s been great to have this technology that allows us to do that. With some of the other cast members, we’ve had a couple of Zooms with our dogs. And then we were lucky to do some reshoots [for TATB 3, so] I got to catch up with Noah and Lana safely. 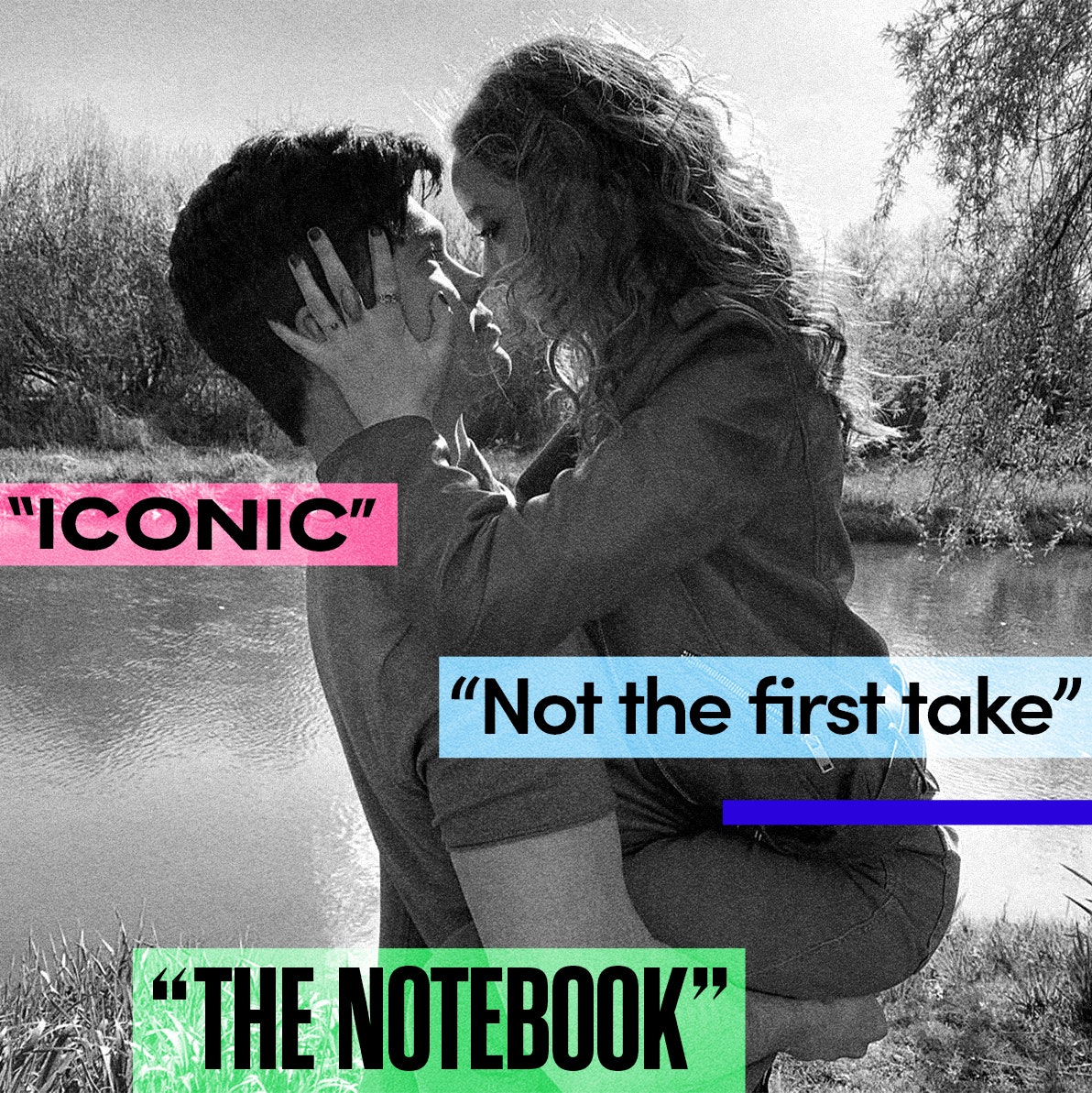 ED: Where and when was this photo taken?

MA: On the first movie we met with Jenny Han, our incredible author [who wrote the To All The Boys book series]. When she was on set one day, she had some of us actors recreate iconic moments from rom-coms. So I did the John Cusack Say Anything, hold up the boombox. I believe Lana and Noah did a moment from Dirty Dancing with the lifts. So when we came to the second movie, the cast and Jenny were all talking and the idea came up that we should recreate an iconic moment from a movie and we landed on The Notebook. I don’t believe that picture was the first take. It took [Ross Butler and I] a few tries to get it to look right.

ED: You mentioned Jenny being on set. What was the collaborative process like with her?

MA: Having her on set was wonderful. It’s her vision and we’re bringing her words off the page. To have her support as we bring the characters to life and have little tips and things that were important to her in the books to bring forward was invaluable. 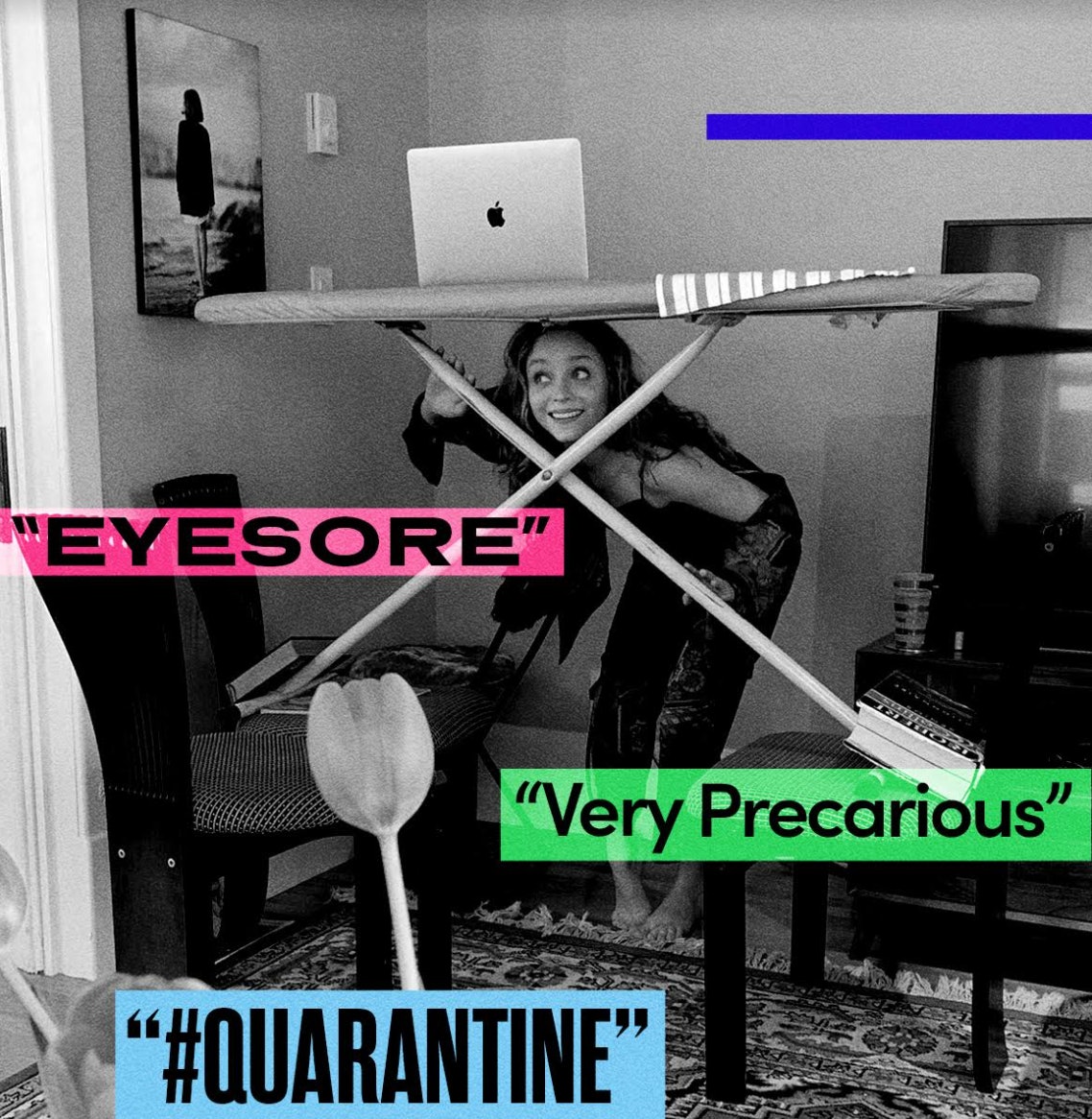 ED: Where and when was this photo taken?

MA: I want to say [this was] the first or second week of quarantine, way back in March [2020]. I wanted to stand up for a scene and was trying to figure out how to raise my computer to my face. It was very precarious. I did take it down fairly soon after that because it was a little bit in the way and an eyesore. Now I put a piece of plywood over a living room table and then a stool on top and then my computer.

ED: Have you found any unexpected bright sides of quarantine?

MA: Recently, with my friends every Friday night, we sync up and do Club Zoom. We put together a themed playlist and we hop on Zoom and just dance for hours. It’s really connected us and reminded us that we’re all in this together. We all leave feeling really excited and happy and we can’t wait for the next week to see each other.

ED: Do you have any tips for coming up with a good Club Zoom playlist?

MA: I have a lot of friends who are musicians, so they came up with this idea of themes. The first one we did was New Year’s. The second one we did was for my friend’s birthday, so [we played] songs she really liked and related to her. Then we did pop stars. Anything that’s good to dance to, I think is important.

In Elite Daily’s I Can Explain… series, we’re asking celebrities to revisit their most memorable photos and tell us what really went down behind the scenes. Read more here.