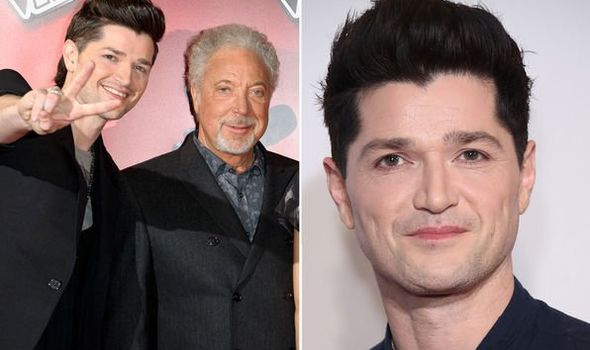 The Script singer Danny O’Donoghue, 40, has revealed that a boozy night with 81-year-old Sir Tom Jones ended with him having heart palpitations, which needed medical attention. Reflecting on the boozy ordeal, he said the Welsh singer “wouldn’t let me leave the table until the bottle was finished”.

He spilled: “We drank champagne until 7am, then I had to get up early and drank a lot of coffee – I was hospitalised next day because I ended up getting heart palpitations.

“I’m not blaming Tom, I blame my ability to not say no.”

Danny made his admission at the Isle Of Wight festival 2021, where he and Tom are performing this weekend.

And his past hospitalisation hasn’t put him off partying as he added to The Mirror: “Some of us have planned on staying there partying because a celebration is needed.”

He added: “I think we’ll just go mental. You think Liam Gallagher is a hellraiser?

He went on to say that the singer ordered multiple bottles of champagne to their table and wouldn’t let him leave the until the bottle was finished.

Danny worked alongside the Sex Bomb hitmaker on The Voice for the first two series of the show.

The pair were coaches alongside will.i.am and Jessie J.

Nowadays, he said he is currently off the booze due to training as a Muay Thai fighter.

Tom also recently discussed his new healthier lifestyle, which includes cutting down on his alcohol intake.

The singer revealed he had a personal trainer who put him through his paces with the likes of boxing exercises.

He added he now only enjoys a glass of wine or a pint with dinner occasionally.

“You know on one of those frames. It’s great.

“You put your feet in the thing and you flip and you hang.”

On reaching the milestone age 80 last year, the singer said he had no plans to retire.

He told The Mirror: “I don’t want to stop as God has been good to me and my voice is still there.

“I want to do it as long as there is a breath in my body.”

The hitmaker began his career in 1963 and grew popular following his hit It’s Not Unusual.