If ceramics have recently been getting their due in the contemporary art world, that’s partly because its practitioners have steadily, rigorously been working to upend the arbitrary distinctions between art and craft. Since starting her ceramics practice in the 1970s, the Nairobi-born British artist Magdalene A.N. Odundo has created elegant vessels whose sinuous forms and stately sizes command space. Made by hand from English red clay, they draw as much from the traditions of Odundo’s native Kenya and other African cultures as from Greco-Roman, Indian and Chinese methods of making ceramics.

While the works of Odundo have been collected internationally in museums and fetch high prices at auction, this presentation is her first in New York in nearly three decades; it features 10 large vessels, each produced within the past five years, alongside two drawings from her sketchbook. Odundo creates her terra-cotta sculptures by coiling the clay by hand, rather than with a pottery wheel, then immerses the finished vessels in a colloidal solution of water and clay before firing them in the kiln. This careful process, months in the making, is evident on the surfaces of the unglazed vessels. Mottled in gradations of onyx and orange in patterns that resemble dyed fabrics, her pieces reward the careful observer with surprising shifts in color, pattern and detail.

These subtle variations are made more striking by the spare arrangement of the works on white plinths in the gallery, and these elements work harmoniously to demonstrate how the ceramist’s métier is always a balance of technique and chance. Small protrusions on the bases and necks of these works, suggestive of nipples or belly buttons, indicate that the human body is still productive reference material for artists like Odundo, who revitalize an ancient form with sparks of new inspiration. 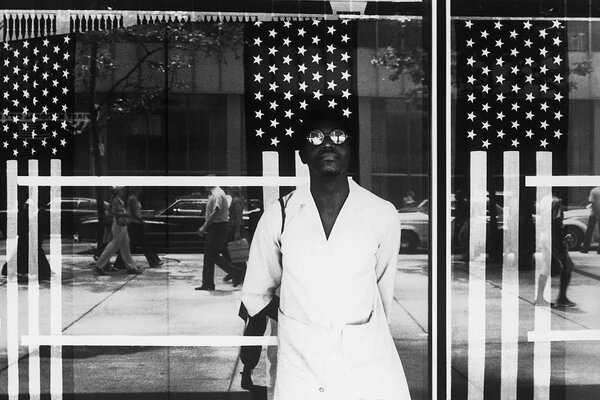 What if we spent as much time listening to photographs as we do looking at them? Scholars like Fred Moten and Tina M. Campt have suggested that when looking at images of African Americans, often historically silenced, opening our senses to their “sound” might recover their lost histories and activate new ways of engaging with the world. This seems perfect for thinking about the photographer Ming Smith, who was featured in the recent Kamoinge exhibition at the Whitney Museum. “Evidence,” a gallery-size survey of 50 years of Smith’s work, is the inaugural show at Nicola Vassell.

Sound reigns, of course, in Smith’s photographs of musicians — here Sun Ra, Grace Jones, an unidentified saxophonist in “Red Hot Jazz” (1978) — as well as a glamorous “Self-Portrait as Josephine (New York),” from 1986, in which the artist conjures the persona of Josephine Baker, the great American performer and activist. A defiant silence pervades “America Seen Through Stars and Stripes (New York)” (1976), in which an unidentified Black man stands in front of windows hung with American flags. The cry of the wind whips through Smith’s famous, moody photograph, “Dakar Roadside With Figures (Senegal)” (1972), and the clamor of protest and politics are palpable in two photographs from the Million Youth March in Harlem in 1998.

A spooky, almost spiritual silence exists in photographs of cornfields, religious monuments and dramatically lit interiors. Smith’s work combines many strategies of classic black-and-white 20th-century modernist photography: abstraction, high contrast, and the intimacy and Surrealist special effects of Brassaï (shown here in a 1979 portrait by Smith). However, thinking about her work with new critical tools, through sound as well as sight, offers some new insight on Smith as a late-20th-century master.

With silky cocoons that hatch electrical wires and phallus-shaped slugs in fluorescent bird cages, Tetsumi Kudo’s sculptures are kind of kitschy. They can look more like props for a low-budget sci-fi movie than art. But that’s what makes them so compelling: They’re bizarre, garish and unpretentious — an unusual sight in galleries today, especially polished mega-spaces like Hauser & Wirth. And while they weren’t made for any film, the sculptures are props in Kudo’s artistic-philosophical narrative.

Born in Japan in 1935, Kudo (who died in 1990) lived through World War II. He studied art but rebelled against traditional education, organizing happening-like performances and helping to usher in the postwar anti-art movements. In 1962 he moved to Paris, where he remained for much of the rest of his life. There, he developed his critique of European humanism, contending that people didn’t belong at the apex of the societal pyramid after centuries of war, slavery and other ills; they needed to decompose and transmute “to form a completely new ecology” with polluted nature and technology, he wrote in a 1971 manifesto.

Hence the title of this exhibition, “Metamorphosis,” which features works from the 1960s and ’70s. Hence, too, his grotesque visions, like “La liberté de l’étalon” (1972-77), a triumph of phallic snails writhing around a crucifix covered with electrical wires, all inside an acid-pink-and-yellow cage.

For all the fervor of Kudo’s beliefs, some of the sculptures are funny. And aside from a painting printed by computer, the work isn’t technologically sophisticated. In the end, there’s something delightfully, fundamentally, and almost quaintly human about these scenes dedicated to our abjection.