For Abigail DeVille, whose projects employ salvaged materials to address themes often obscured in American history, the opportunity was to make something big. At the center of her multipart installation in “Brand New Heavies,” a three-artist exhibition at Pioneer Works, in Brooklyn, is a 20-foot-tall metal and chicken wire structure inspired by the U.S. Capitol dome.

For Xaviera Simmons, whose practice includes photography, performance and sculpture, the show was a chance to try a new medium, ceramics. She has built a 15-foot edifice of clay spheres fired at high heat; two video works are shown within, one didactic, the other brashly sensual.

And for Rosa-Johan Uddoh, a young London performance and video artist, the exhibition is an American debut — the first time she’s presenting her wry investigations of British society across the pond. One work is showing on a huge screen in a cinema-like environment with lush curtains and carpet, the other on several small monitors at its entrance.

“Brand New Heavies” — some will remember the funky acid-jazz band that inspires the title — isn’t shy about putting the artists first. Its curators are the artist Mickalene Thomas and the collector Racquel Chevremont, life and creative partners under the moniker Deux Femmes Noires, with a record of leveraging their success to bring others along. 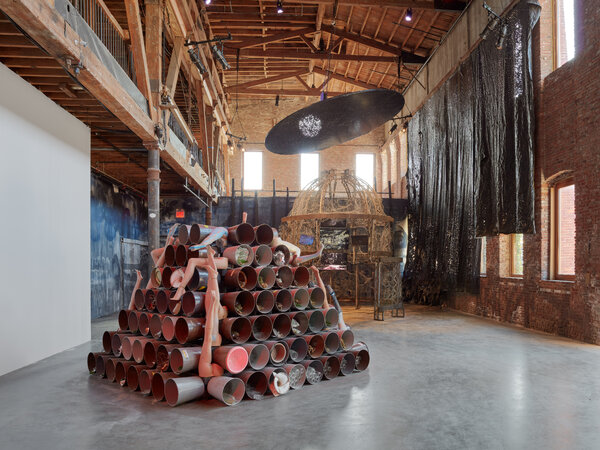 But the exhibition is also a demonstration of method.

“Our curatorial practice is like: These are artists we want to work with, let’s allow them to make and do stuff they haven’t been able to do otherwise,” Thomas said. The curators urged the artists to make use of the former factory space’s half-acre footprint and 40-foot ceilings, and backed them with a fabrication team and resources.

The hunch is that giving artists a wide-open creative brief, with the freedom to make the work they feel is most urgent, and space and resources to see it through, can be as effective in illuminating a time of crisis as would any tightly crafted curatorial argument — and possibly more.

“It’s of the moment,” Thomas said. “It’s something that you’ve never seen before.” A few weeks ago, the curators and artists — minus Uddoh, at home in London because of the pandemic — offered a view of the show’s making. One area had been turned into a ceramics studio with three kilns, where a team of potters worked meditatively. Painters prepped Uddoh’s screening room, and frames were set up for Simmons’s and DeVille’s creations.

“I’ve been wanting to put up the Capitol dome for a minute,” DeVille said. Mounted in the completed structure, which she calls “The Observatory,” are screens showing images of what she called “embattled sites in American history.” (She initially envisioned periscope-like viewing devices wedged in the chicken wire, but scotched that approach for pandemic hygiene.) Suspended above the dome is a dark disc suggesting distant galaxies, or a black hole.

DeVille was concerned, she said, with the way American public architecture projects a grand narrative that suppresses contradicting evidence — from the construction of the Capitol by, among others, enslaved Black laborers, to present-day state-sanctioned violence.

“In the formation of the United States there’s a love affair with classical structures through which to project our potential greatness,” DeVille said. Her dome idea crystallized after Donald Trump’s election, with his call to restore lost American glory. “We’re always trying to position ourselves back,” she said, “and kind of missing the point.”

Her Capitol hosts different histories. Onscreen, for instance, are period maps of the Fresh Water Pond area in Manhattan, where free Black residents lived until it became largely Irish Five Points. “I think of places where people put down roots but it was always shifting, as they were subject to being pushed out,” she said.

Other footage was shot during her travels, notably along the Carolina and Georgia coast. Once, she recalled, having stopped to gather scrap materials at the roadside, she saw a sign indicating that she was at the Combahee River — where Harriet Tubman led a Union raid that freed 700 enslaved people. She has incorporated her video of the location into this work.

DeVille’s installation includes a second, ziggurat-like structure made from 370 garbage cans, filled with old bottles and other containers, with mannequin legs protruding. The metal cans were salvaged from a former Social Security office in Baltimore, she explained — a federal edifice of much more utilitarian function.

Completing the environment are perforated tarps that cover the windows of the cavernous exhibition hall, filtering the light; silhouetted legs emerge at the base. Long sticks lean against a wall, each with an array of red feathers at its foot — inspired, she said, by MAGA hats and liberty poles. The aggregate effect is a kind of folk panorama, at once prosaic and mysterious.

DeVille expects visitors to associate her piece with the Jan. 6 Capitol insurrection, though she conceived it before. In fact, she said, there was no shortage of available historical allusions: “Throw a dart at the map anywhere in the U.S. and you’re going to hit a can of worms.”

Simmons’s installation incorporates some 800 ocher spheres into a structure with an arched entrance. The artist’s résumé is considerable and eclectic, including, most recently, steel pieces with embedded text at Socrates Sculpture Park, and a work on a highway billboard in the current Desert X biennial in California. At Pioneer Works, she has taken a fresh plunge.

“I’m still interested in formal processes,” Simmons said. “It’s about the making of the work and opening a new chapter or channel in my practice.”

On her mind was touch. Working in clay, she said, had a certain tactile integrity, as well as roots in all cultures. “It’s an earthen desire on my part,” she added, “to see and feel this kind of material, the oldest kind of material.”

Inside are back-to-back monitors. One shows text slides that distill history and current events — a story about Thelonious Monk, a comment on how political movements splinter, a reminder of the water crisis in Jackson, Miss., and so on. The other plays a montage of sensual images, culled and blurred from erotica.

“Body to body,” Simmons said. “I want you to be turned on.” She has titled the work “Even in the variations, the division of pleasures help situate us to advocate for.”

Active citizenship, she suggests, operates in both fields at once — analytic and libidinal. If the pandemic caused a scarcity of touch, the year’s social justice protests countered with catharsis, modeled by young people whose elders had much to learn.

The present moment, Simmons said, was full of potential — a break, with seeds of a better way sprouting. “I think we’re at a beautiful pivot point, especially for artists or thinkers, who have to go about the work of imagining. I think we’re getting to that moment of repair.”

Uddoh, meanwhile, is the show’s youngest artist, one grounded in the British experience, which she inspects with scholarly insight and lively humor. A 2018 graduate of the Slade School of Fine Art, she has earned early-career distinctions in the U.K. but had yet to show in the United States.

When she received the invitation, she said, she thought it was a hoax. But the curators had spotted her. “It was something about her,” Chevremont said. “I thought, she needs money and resources behind her to really push the work.”

On the large screen, Uddoh is presenting “Black Poirot” — a 20-minute film mixing found footage with a text narration, in which she speculates that Agatha Christie’s sleuth, Hercule Poirot, with his ambiguous status in British society, might as well have been Black — and if so, might have developed a radically different investigative method, informed by Frantz Fanon, Edouard Glissant, and other theorists of race and empire.

In her work “Performing Whitness,” showing on the smaller screens, she inhabits the character of Moira Stuart — the first Black BBC news presenter, hired after the Brixton riots of 1981, and a fixture throughout the artist’s childhood. “Here was a Black woman to be trusted,” Uddoh said. “She’s smart, she’s in her suits and stuff, she’s the mouthpiece of the state broadcaster.”

In her own coming-of-age, Uddoh said — studying architecture at Cambridge; working in a London firm; then going to art school, and dealing with galleries and museums — she became fascinated by what women like Stuart pulled off, and the cost. “With my experience of what it is to navigate white institutions, I started to think about it as an incredible feat of performance.”

If conditions allow, Uddoh hopes to come over before the show closes on June 20, and add a live component. Already, Thomas and Chevremont said, her work injects a different diasporic perspective to what can be overly insular American conversations.

Compared to exhibitions with heavy themes, “Brand New Heavies” offers a different way of addressing the contemporary period of cascading trauma and, hopefully, promise of renewal.

There is value, the curators suggested, in going wide open and leading with trust, on the notion that the discoveries artists make along the way will inspire fresh ideas, too, in viewers.

“When artists are given the platform and have an idea, something magic happens,” Thomas said. “That’s the heavy. That’s the brand new.”