It might be bad news for Jenna Ortega fans, but things are looking up for Matthew Lillard’s long-rumoured Scream comeback.

Our favourite scary movie franchise is back with a terrifying new trailer – and, quite honestly, it’s got us counting down the days until Scream VI hits cinemas.

Unfortunately, though, the unthinkable happens: the masked killer breaks all the horror movie rules and follows them to the city, stalking and terrorising the teens with not just the classic blade, but also a pump-action shotgun. Which… well, which feels a bit like cheating, if you ask us.

Horror films in 2023: 21 terrifying new movies we can’t wait to watch this year

Of course, the quartet aren’t the only ones at risk of being sliced and diced: Gale Weathers (Courteney Cox), Kirby Reed (Hayden Panettiere), and Samara Weaving’s new character are also on Ghostface’s hitlist.

“There’s never been one like me,” the cloaked figure declares during one particularly nasty-looking confrontation with Gale, further fuelling rumours that her luck might be out, and that she may very well die in this, her apparent legacy movie.

Watch the trailer for Scream VI below:

Now, there’s nothing more fun than trying to unmask the killer before it happens on screen – and there’s no denying that this trailer has plenty of twisty clues and hints as to who might have taken on the role of Ghostface this time around.

And so, without any further ado, let’s take a look at the most compelling Scream VI fan theories so far.

Everyone remembers Stu, right? The bumbling best friend of Billy Loomis (Skeet Ulrich), aka the original Ghostface. He wound up bleeding out in a very big way when his and Billy’s murderous scheming went wrong in the first film. And then he got a TV dropped on his head, for good measure.

Did he die, though? Well, fans aren’t convinced – especially now that his name features on the film’s official poster.

Take a look for yourself if you don’t believe us:

That’s right; the poster depicts a map of the New York subway system, where every stop is the name of one of Ghostface’s victims. Stu’s dot, however, is a slightly different color from everyone else’s along his line, which has suggested that the character could be alive and kicking… or, y’know, alive and stabbing.

“I don’t know. I mean, we’ll see,” Lillard told Us Weekly of the possibility of reprising his role of Stu Macher in the 2023 slasher film.

“Listen, nobody’s called me… unless of course I’m totally in it and I’m lying to your face.”

Wednesday season 2: everything we know so far about the sequel to Netflix’s hit series

In a separate interview with Vulture, the actor teased: “Have you seen Friday The 13th? Jason comes back… like Stu still could come back.”

… or someone related to Stu, at least

If Lillard isn’t back (and, honestly, this writer would be very sad if that’s the case), perhaps someone related to him might be donning a mask this time around. Maybe they’re sick of Billy Loomis getting all the credit for the original Woodsboro murders, and they want their beloved Stu to get a slice of the pie.

Only time will tell, we guess.

We’ve always been treated to the Ghostface rule of two: a killer and an accomplice. The trailer, though, offers a glimpse into Ghostface’s elaborate city-based lair, which reveals a whopping nine Ghostface costumes – one for each of the franchise’s killers so far. We also, too, have on display the bloodied clothes of some of the masker killer’s most famous victims… including the lime turtleneck and psychedelic skirt worn by Stu’s long-dead ex, Tatum Riley. 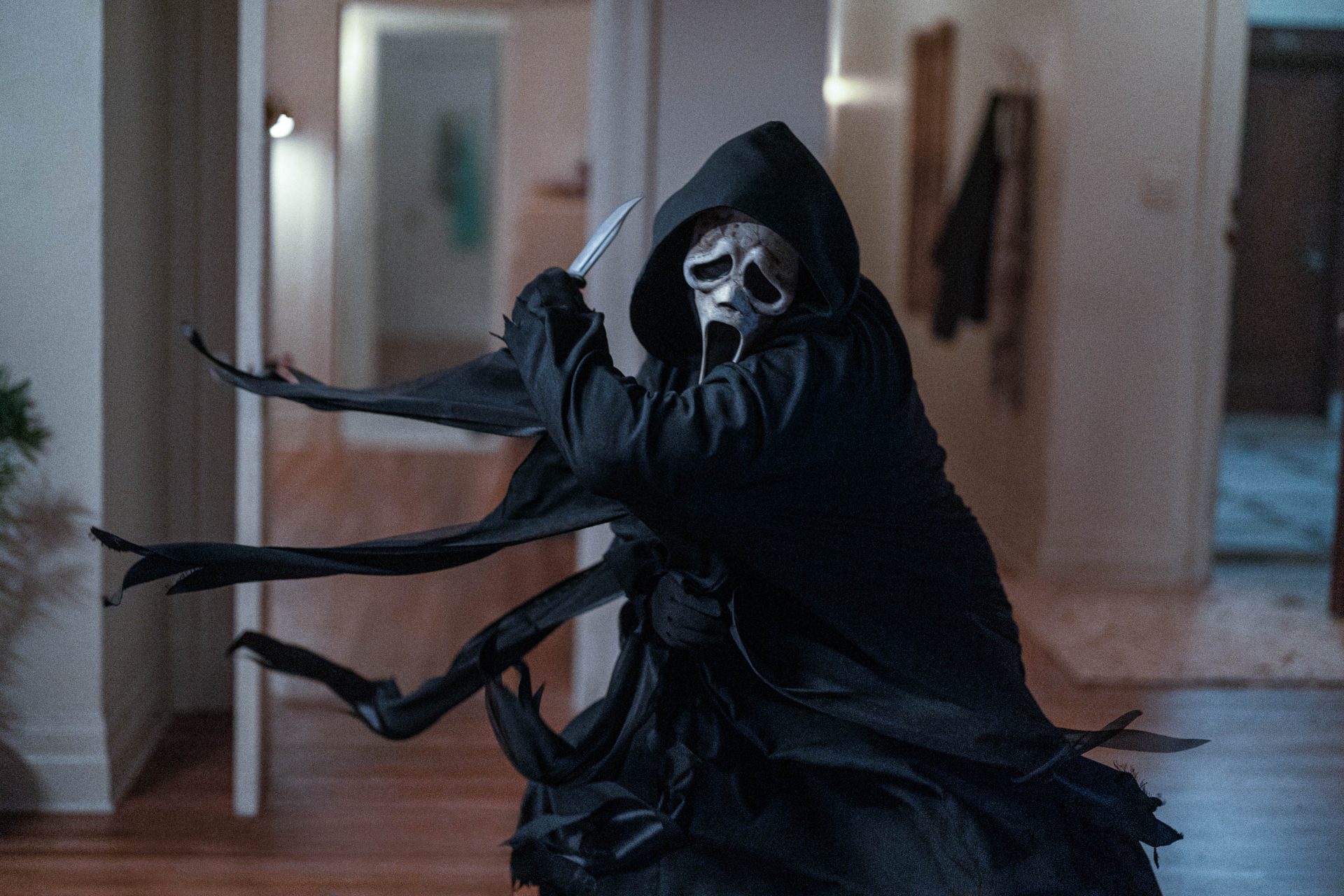 Could there be a Ghostface cult to deal with in Scream VI?

All of this, combined with a brief shot of some graffiti in the trailer, leans into the idea of a Ghostface cult – and it would be an interesting, albeit terrifying, way to set this story apart from all the others that have come before it.

Jenna Ortega’s Tara will betray us all

We love Tara Carpenter, and we’re stoked that she survived the murder spree in Scream 5 – but that little smirk she shoots us at the end of the trailer? And the fact that she’s the only person on the poster who’s looking directly at us? It has us wondering if she could be in on Ghostface’s plans this time around. Especially as Ortega says her character feels so stifled.

“There’s a lot of tension between her and Sam; she feels as though she’s too protective and unwilling to allow them both to move on,” she tells EW.

Scream 5: How the Scream franchise has been killing off sexist horror tropes for 25 years

It’s that or, y’know, she is due to die horribly and take one of the Ghostface killers down with her. Either way, it doesn’t seem likely that we’ll see Ortega in any Scream films after this. Too busy with the second season of Wednesday, we guess.

Scream 5 seemingly put an end to the franchise’s long-held tradition of killing off its most famous actor in the opening scenes, but hear us out: Samara Weaving is a major movie star, but she is only glimpsed in one Scream 6 trailer scene, and even then she is standing alone instead of among the rest of the cast.

Is anyone else putting money on her being an early Ghostface victim?

… but Kirby will play a major role in the film

We originally feared that Panettiere’s character was being resurrected solely for the aim of a killer misdirect, much as filmmakers did with Liev Schreiber’s Cotton Weary in Scream 3 (remember, they brought him back just to kill him!).

Thankfully, though, Kirby appears in plenty of scenes throughout the trailer, and Panettiere has hinted that her past run-in with Ghostface will make her a vital character in the murder plot this time round.

“She’s come a long way,” she told EW. “What happened to her has obviously impacted her life, and it sends her in a certain direction, but she’s still the same old Kirby at the heart of it.

“She’s just a little older, a little wiser, but just as spitfire-y, and snarky, and all that good stuff.”

Just so long as it’s all the good stuff and not, y’know, the stuff that drives her to become a murderer herself.