The latest retro iteration of the Air Jordan 2 Retro “Chicago” is finally here. The iconic colorway carries a legacy all on its own in both high- and low-top formats. As expected, “Chicago” is a hot-ticket launch and a faithful rendition of the 1986 shoe that will serve as a satisfying footnote to Jordan Brand’s 2022 holiday lineup. The roundup below puts eyes on this year’s anticipated collaborations with J. Balvin and Union LA and noteworthy cross-over collabs with Off-White, A Ma Maniére and Just Don. It’s interesting to see how the “Chicago” color story has left its imprint on streetwear and the immortal dialogue that shrouds the original 1986 release and, as a closing year addition to Jordan Brand, the OG makeup returns clean and collectible as ever.

Take a look back at the AJ2s that have dominated the Jordan franchise through the years, and find each style on GOAT. 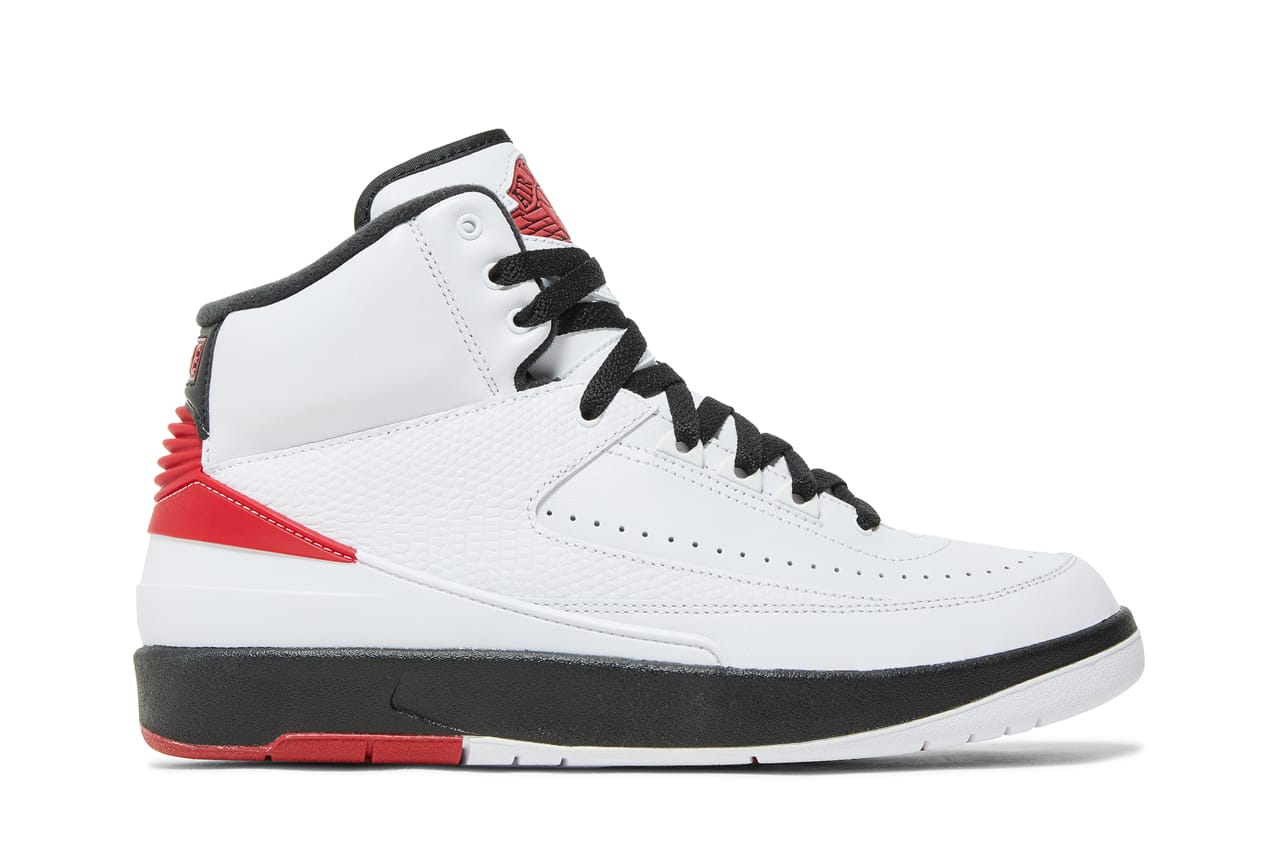 The original 1986 release of “Chicago” encapsulates the legacy and career of Michael Jordan and a moment in time when Jordan Brand strong-armed the NBA to drastically shift its sneaker regulations to accommodate the rise of streetwear at large, harkening back to the 1985 launch of “Bred.” The 2022 take on the coveted silhouette is faithful to the original, with one minor deviation. Atop the tongue, a vibrant red Wings emblem distinctly replaces the familiar Nike Air logo. The medial and lateral panels are enveloped in white, pebbled leather. Minimal contrasted details can be found along the black piping around the tongue and collar, a black midsole equipped with Air technology underfoot and injections of “Varsity Red” at the heel tab and outsole. Finishing touches, like the Nike logo, stamped at the heel, a “23” cloth patch decorating the back of the tongue and black laces unify the beloved color story. 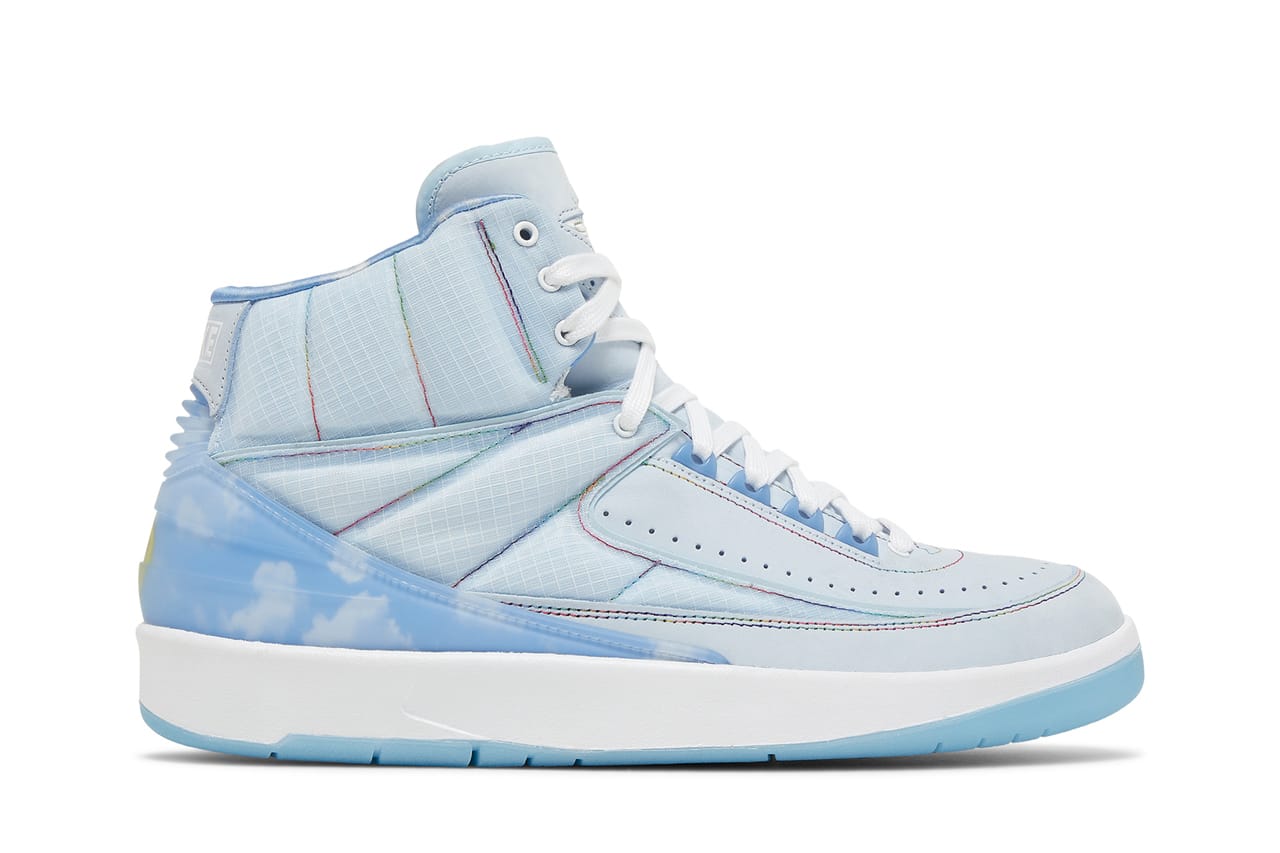 The ‘Boy from Medellín,’ Colombian reggaeton singer J. Balvin, teamed up with Jordan Brand for one of the franchise’s most eye-catching collaborations of 2022. From the graphic cloud print adorning the counter heel to the geometric topstitching applied to parts of the collar and midfoot, J. Balvin’s reimagined AJ2 is a playful and kitschy embodiment of his personality at large. There’s a lot at play texture-wise: puffy paneling at the midfoot and collar, shiny ripstop interiors and suede components at the tongue. Pops of gray, baby blue and rainbow topstitching bring a sense of depth to the airy creation. To up the ante even more, this AJ2 is replete with glow-in-the-dark Wings branding atop the tongue while Balvin’s smiley face logo decorates the lower base. 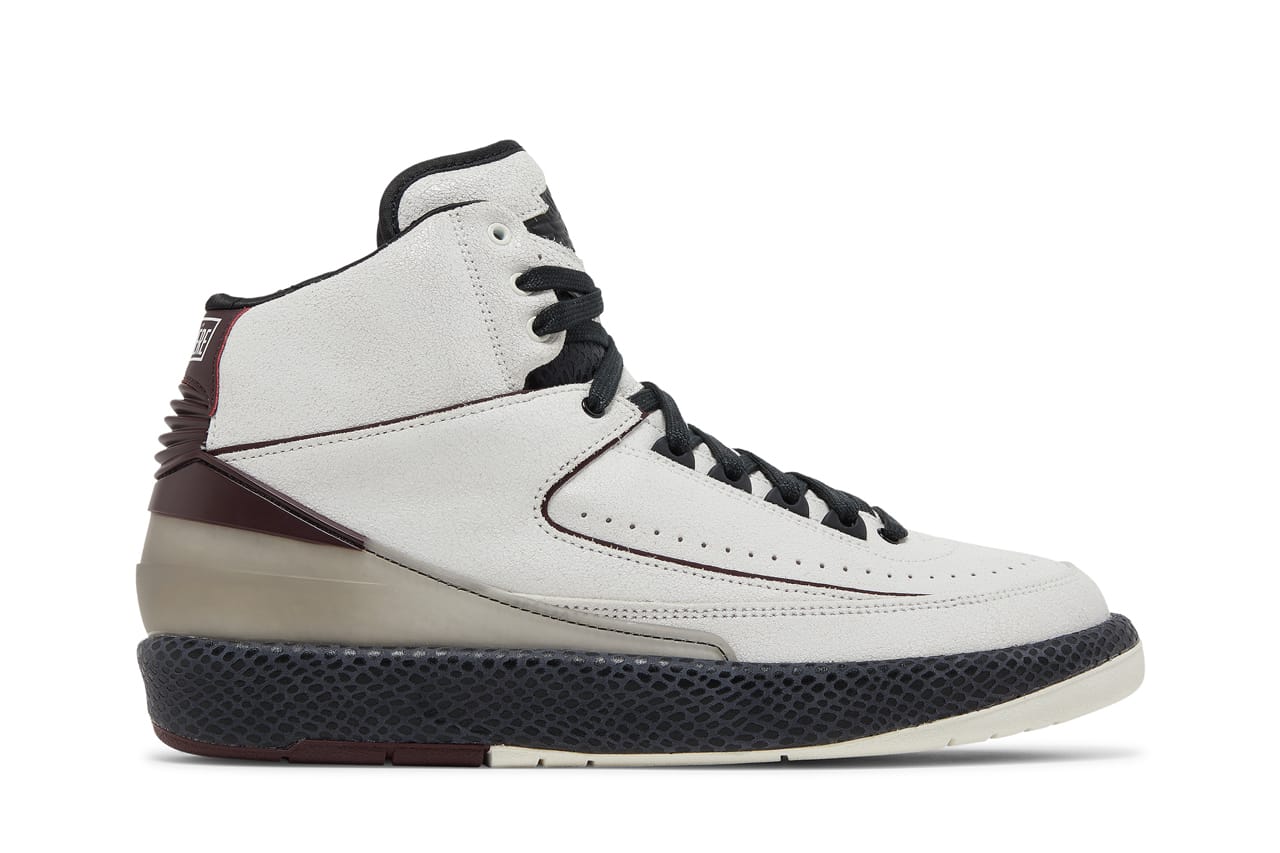 Released in June, A Ma Maniére x Jordan Brand’s AJ2 “Airness” is a soft-washed execution that revisits the colorway’s signature crackled leather base. The off-white uppers are adorned with a translucent overlay, which sits atop a black midsole accented by a snakeskin pattern. For added contrast, decorative maroon piping outlines the medial panels, finished with black nylon piping at the collar, black laces and a matching Wings emblem at the tongue. A Ma Maniére branding appears at the back of the heel. 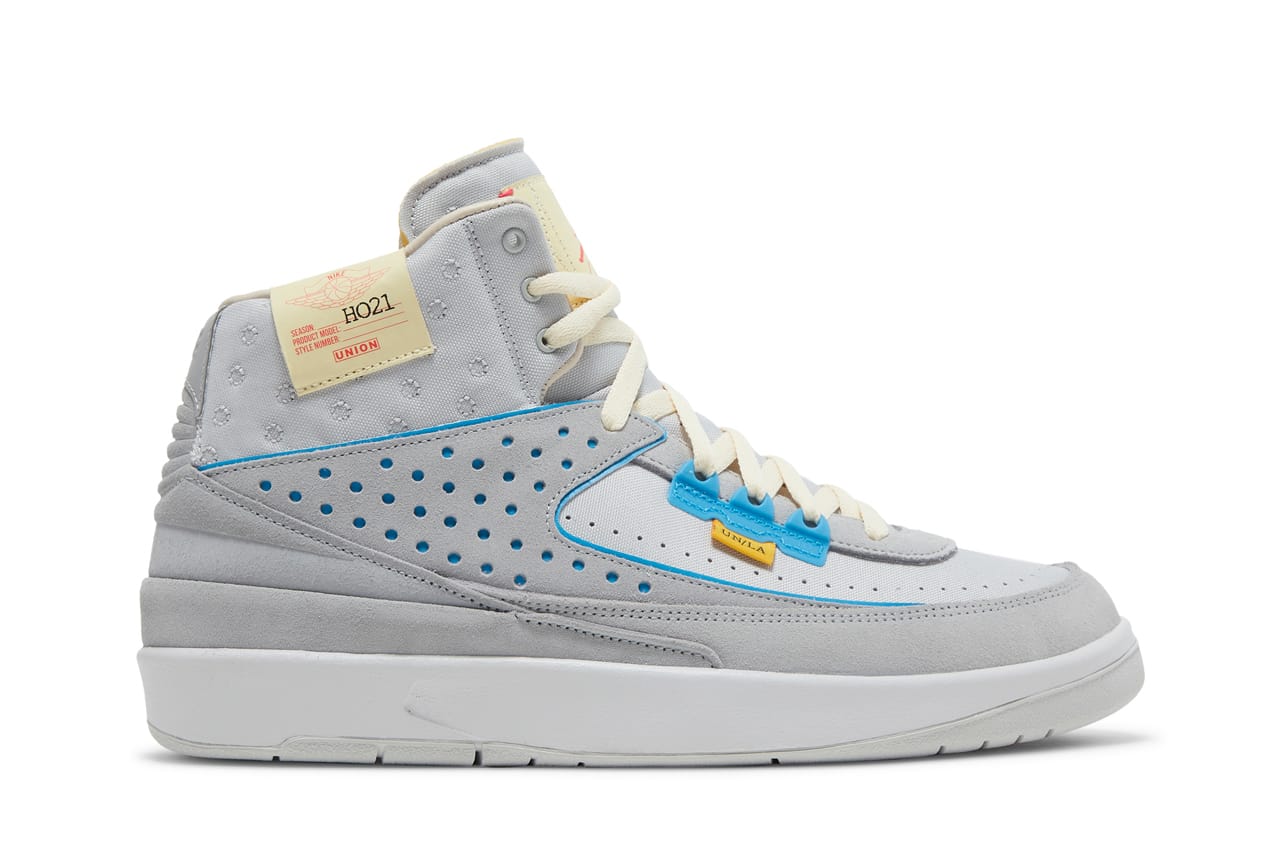 No matter the release, Union LA x Jordan Brand collabs stir the sneaker sphere into a frenzy. The April launch of “Grey Fog” followed suit. One of two sneakers included in the “Future is Now” collection (including the limited colorway “Rattan”), the collaborative “Grey Fog” was introduced to the world in tandem with slides and apparel developed by Chris Gibbs and his team. The collection centers around the idea of utopia while drawing design influence from organizations and professions that usher in change, in this case, taking sartorial inspiration from flight jackets and utility apparel. Within this theme, light gray nylon and suede uppers pop from the contrasting soft blue piping for an overlay effect. The midfoot consists of perforated suede paneling, which gives way to the stylized nylon collar. The laces and tonal Nike Air and “UN/LA” cloth patches at the tongue and along the eyestays reintroduce hits of yellow, and a retro-inspired identification tag hugs the side collar. 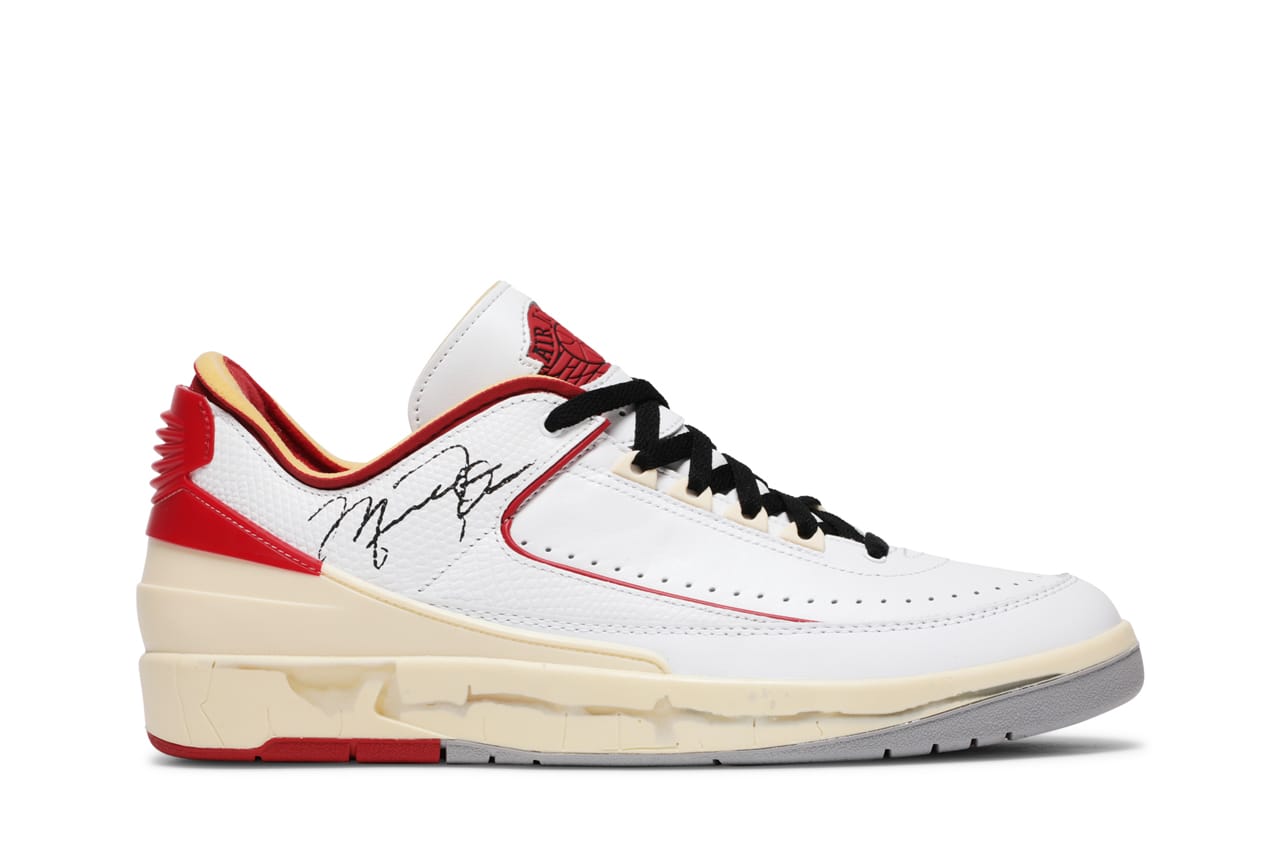 The late Virgil Abloh’s 2021 collaboration with Jordan Brand is a visual feat marked by multi-textured overlays and graphic customizations. The base consists of white pebbled leather accented by “Varsity Red” piping and overlays predominantly applied to the midfoot. The cream midsole deploys a graphic motif and semi-translucent inlay to appear as though the midsole is slowly breaking apart with wear. Jordan’s signature adorns the side collar, while an Off-White manufacturing ID dominates the medial panel. The sneakers are equipped with colorblocked laces and the translucent zip-ties wink at sneaker culture as a cheeky finishing touch. 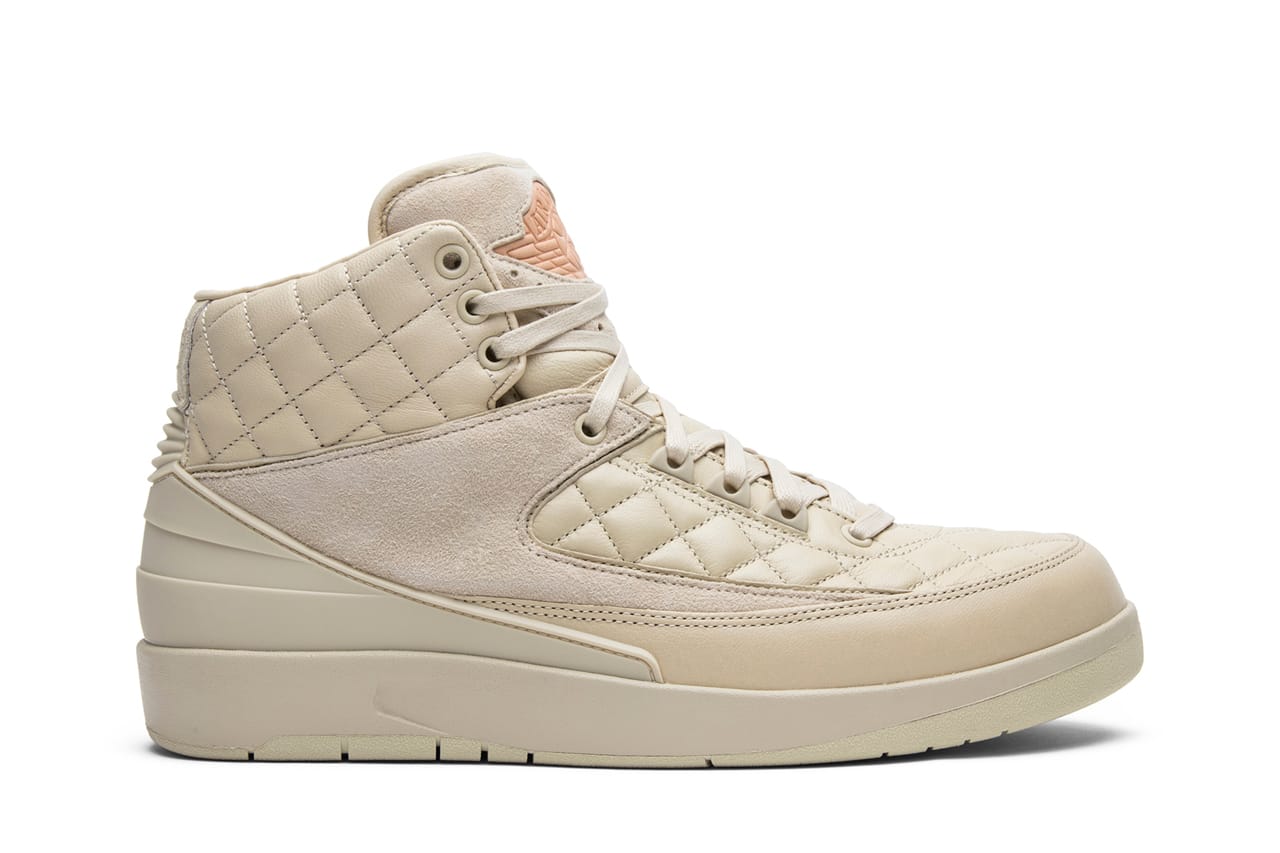 Don C left his stamp on the AJ2 franchise with the coveted 2015 release of “Cream” and later the luxurious and monochromatic colorway “Beach,” distributed in 2016. “Beach” is a tone-on-tone construction with minimal departure from its sand-toned theme, featuring quilted leather uppers and smooth-grain leather. Camel-toned branding, like the embossed Wings logo at the tongue, is paired with gold-toned Nike branding at the back of the heel and a commemorative golden wings pin draped over the laces. Red “Just Don” and “23” cloth patches, covertly placed as interior accents, add a pinch of color. 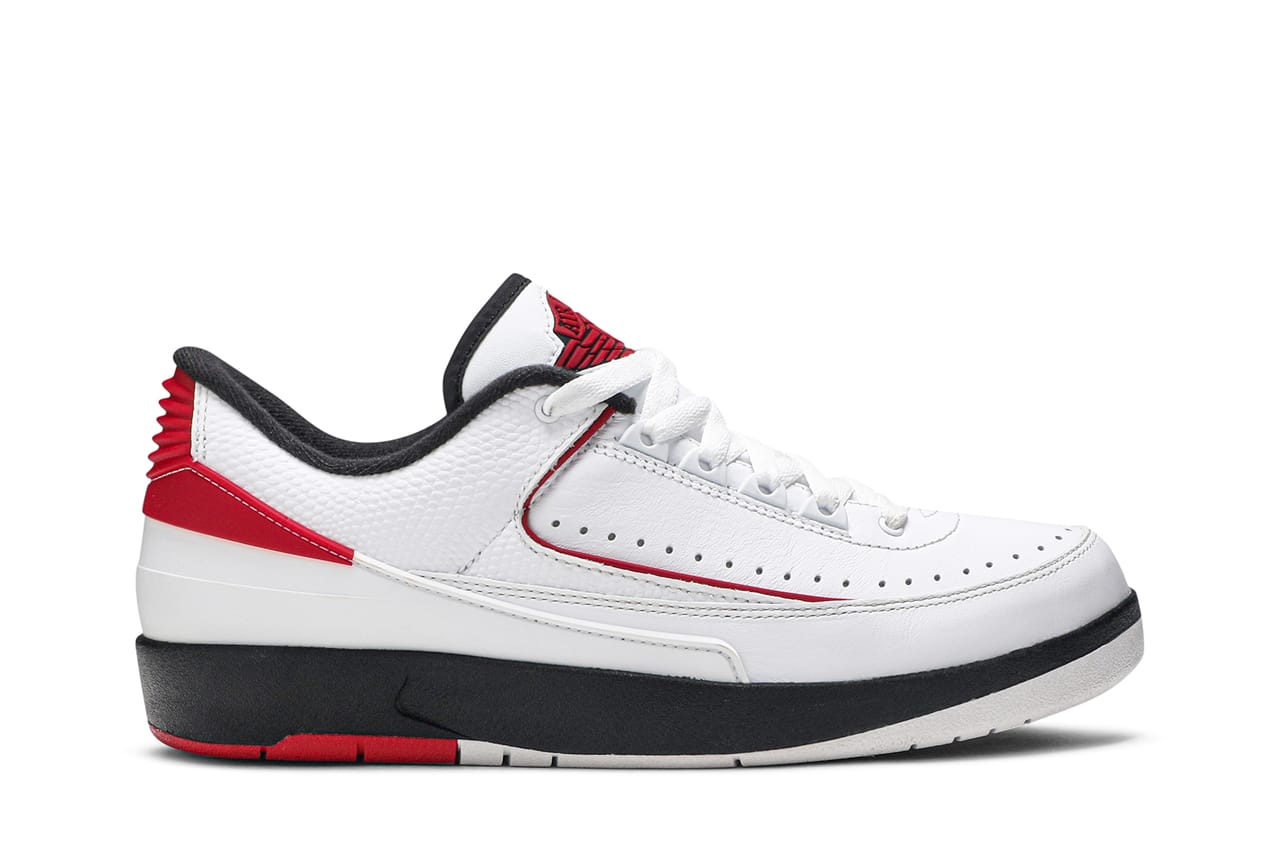 Launched in 2016, this low-top take on “Chicago” sticks to the basics of its 1987 predecessor. Black, “Varsity Red” and white accents build out the color story, while the midsole is enveloped in jet-black rubber with Air cushioning underfoot. A Wings emblem adorns the tongue, and at the back, the signature ribbed heel tab is left untouched. The collar features a faux lizard motif, adding texture to the otherwise matte-finished construction. 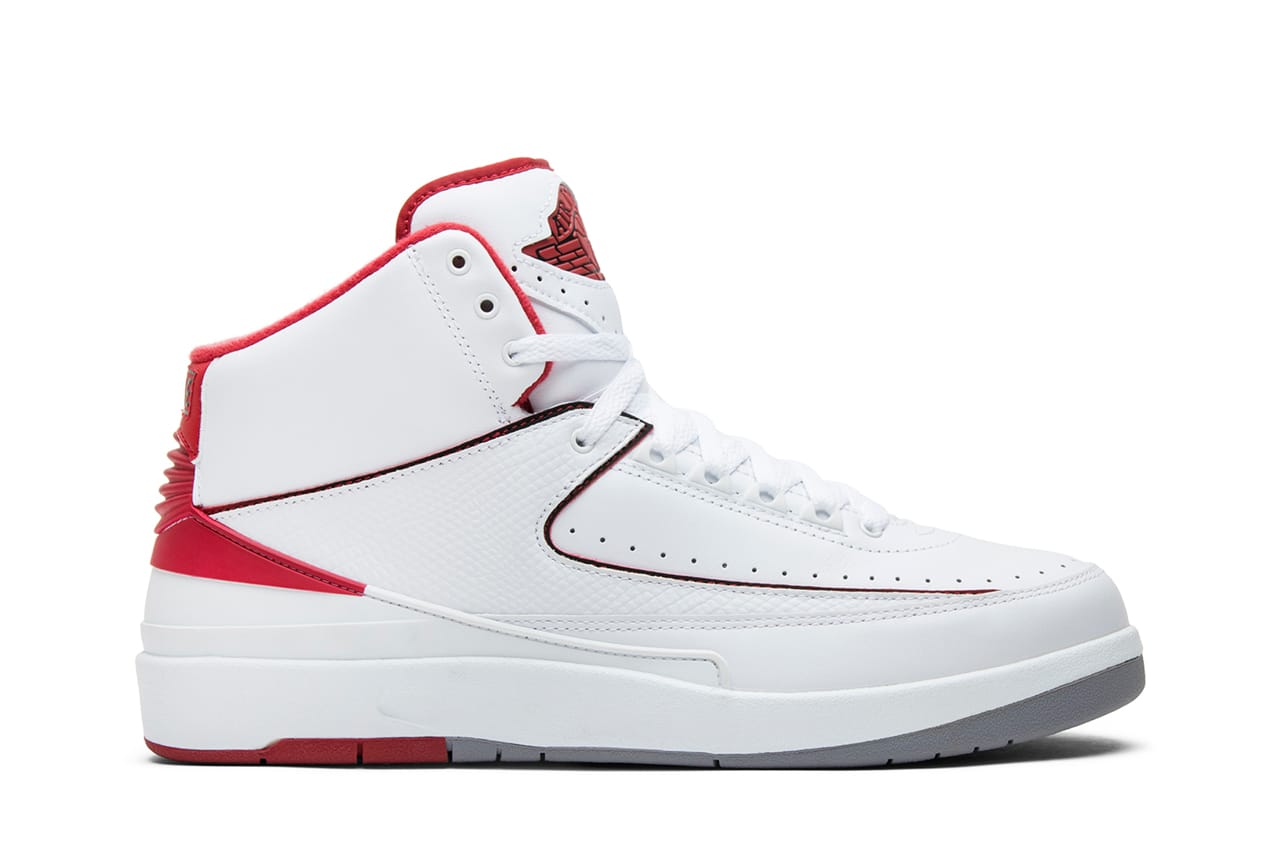 First a retro in 1994, “Chicago Home” later returned in 2008 and most recently in 2014 after a string of limited releases. “Chicago Home” subtly subverts the classic color story by introducing gray overlays to the outsole in lieu of “Chicago’s” blacked-out paneling. Though subdued at first glance, the medial panel features a lizard skin print. “Varsity Red” piping accents the white leather uppers, with red Wings branding at the tongue and a Nike logo stamped atop the heel tab.
Source: Read Full Article