LONDON — At the Globe theater in London one recent Thursday was a sight Shakespeare could have related to: 11 actors larking about onstage rehearsing “A Midsummer Night’s Dream” while beneath them stood the director Sean Holmes, looking furious.

“Listen please, everyone,” Holmes said. “Can we do the scene again, even if it’s a bit of a car crash?”

Everyone stopped joking and got into place. Then Peter Bourke, playing the fairy king Oberon, started singing: “Now until the break of day, through this house each fairy stray.” Soon, the rest of the cast took over, and everyone crept offstage through two huge doors, getting quieter and quieter, as if trying to lull onlookers to sleep with their song.

The performance was perfect. But Holmes didn’t look happy. That day’s rehearsal, he said, wasn’t about the onstage action, but ensuring the 11 actors could get off, change costumes quickly in a small backstage area, then get back on, all while staying two meters (about six and a half feet) apart to maintain social distancing.

If they got it wrong, he’d have to do it again, and again, until they found a solution.

“It’s been the hardest thing,” Holmes said. “I think it finally broke me today.”

When the coronavirus pandemic shut Britain’s theaters last March, Shakespeare’s Globe, as it is officially known, might have been the one institution expected to survive. 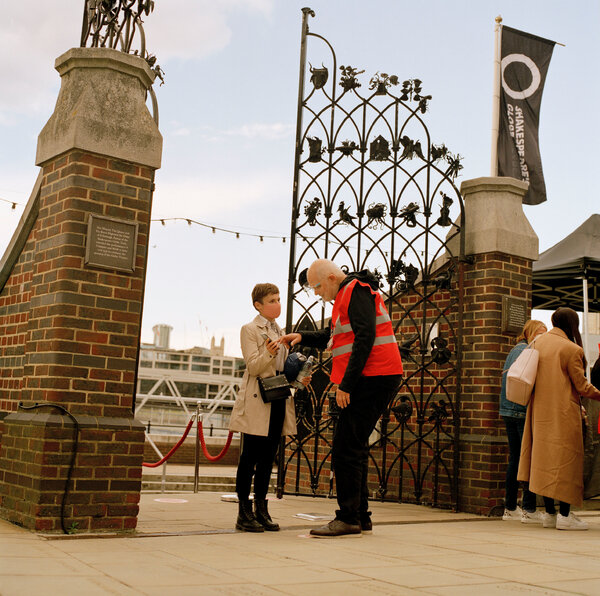 It’s one of the world’s iconic theaters, with supporters worldwide drawn to the idea of a modern recreation of Shakespeare’s stomping ground on the banks of the Thames, complete with a thatched roof open to the elements.

In Shakespeare’s time, his Globe was repeatedly closed as the plague hit London, especially between 1603 and 1613, though the Bard kept writing even during the closures. If the original Globe survived that, surely its updated version could manage Covid-19?

But within weeks of coronavirus hitting Britain, the Globe — heavily reliant on tourism (17 percent of its audience are international tourists, many American) and without the public subsidy that goes to venues like Britain’s National Theater — was losing 2 million pounds, about $2.8 million, a month.

The 180 freelance actors and crew who were on its books at the time, some in the final days of rehearsing a new “Romeo and Juliet,” had to be let go, Neil Constable, the theater’s chief executive, said in a telephone interview. He also had to furlough 85 percent of his permanent staff, meaning the British government paid most of their wages. On top of that, he canceled a multimillion-dollar refurbishment project.

Even with those moves, Constable was soon having to consider mothballing the theater entirely. “We’d have had to shut to 2023,” he said.

In May, he submitted a document to British politicians pleading for emergency funding. Without it, “we will not be able to survive this crisis,” it said. That would be “a tragedy for the arts, for the legacy of England’s most famous writer, but also for the country.”

The news made headlines, including in The New York Times. A few weeks later, Oliver Dowden, Britain’s culture minister went to the Globe to announce a $2 billion arts bailout package. The government eventually gave the theater almost £6 million, about $8.5 million, of that money.

But the bailout money did mean one thing: The theater could finally reopen this month, if only to a socially distanced audience of 400, rather than the normal 1,600. Audience members would also not be allowed to become “groundlings,” the term for people who stand in the pit beneath the stage like normal. Instead they’d have to sit on shiny metal outdoor chairs.

“It doesn’t make financial sense to do this, but it’s important,” Constable said. “It’s what we’re here for.” He hoped British tourists would make up for the shortfall of international visitors.

At the rehearsal, Holmes — who is also the Globe’s associate artistic director — said the theater had decided to reopen with a revival of his 2019 production of “Midsummer” precisely because it was cheaper than doing a new show.

The onstage social distancing was also as much for financial as health reasons, he said. Under the British government’s rules, if one person gets ill in a theater, everyone they’ve been in close contact with also has to isolate, so keeping people apart prevents that. “We have to protect the show,” he said, adding it’d “incredibly damaging financially” if they had to pull it.

A play about mistaken lovers turned out to be surprisingly easy to stage in the age of distancing. “There’s passion and extremity in the language,” Holmes said, “so you don’t need as much physical action.”

He still had to make some changes. In one scene, four of the play’s many lovers fall asleep in a wood. In 2019, they did so “piled on top of each other,” Holmes said. Now, they each got a corner of the stage to themselves (one lover, Lysander, gets a blowup mattress at one point, much to his lover Hermia’s annoyance).

The biggest challenges all involved keeping people apart offstage. At one point in the rehearsal, Holmes went through a scene where the actors run onstage — all playing the fairy Puck — then fire blow darts at one another. Shona Babayemi kept missing her cue.

“Is there a reason you’re always late?” Holmes asked. “There were, like, seven, eight people in the way,” Babayemi replied. “Oh, God,” Holmes said. “Sorry!”

Last Wednesday night, Holmes and the cast were back at the Globe for their first performance in 14 months.

The mood in the lines outside was ecstatic, despite London being cold and damp even by the standards of a British summer. There were groups of drama students waiting to get in, as well as a fishing society and a mother and daughter celebrating a birthday.

None were foreign tourists, but several attendees said they had traveled over an hour to get there, suggesting the Globe may not have to worry too much about attracting people from outside London.

“I’ve got six tickets already for this year,” said Peter Lloyd, 61, who’d journeyed from Brighton on England’s south coast. “It’s the only authentic Elizabethan theater in the country, it feels so close to Shakespeare’s time,” he added. Was he OK with distancing in the plays? “Oh, I didn’t know about that,” he said, worried. “Are they wearing masks, too?”

Inside, the eager atmosphere didn’t let up, helped by Holmes’s carnivalesque staging of the play — with Day-Glo costumes and a band playing almost constant Mardi Gras-style music. At one point, Titania, the fairy queen, wove in and out of the audience on a scooter (the cast pulled up masks sewn into their costumes whenever offstage). A bemused-looking audience member was even roped into the play, made to read out lines and ride on an exercise bike (it helped power the production), much to his partner’s apparent amusement.

On the few occasions that coronavirus rules intruded into the staging, the cast played the scene for laughs. When two characters had to stab themselves with the same knife, the actor playing Flute pulled an antiseptic wipe from his sock, then cleaned the blade, before plunging it into his chest.

The play ran without an intermission — another effort to reduce risk — but few people left to use the bathroom or buy a drink. When it finished, to cheers, about 30 audience members even stayed behind, forming a polite queue to take selfies on the ramp leading up to the stage.

Holmes stood nearby, watching. He looked as annoyed as during rehearsals. “That’s clearly just my resting face,” he said, with a laugh.

“It’s just great we’re back and people are hungry for it,” he added. “We can’t sustain at this level of audience by any means,” he said of the theater being only a quarter full, “but I’m feeling optimistic.”

Then, without the frown disappearing, he headed toward the crew, to find out if the distancing had worked as planned, after all.