WASHINGTON — After Ari Roth was fired six years ago by the Jewish theater he led here, where he had staged plays raising challenging questions about Israel, some of the nation’s leading directors and dramatists rallied to his defense — even as officials at the theater insisted that his dismissal had nothing to do with politics.

For his next act, Mr. Roth quickly founded the Mosaic Theater Company, a new company dedicated to principles of equity and diversity, which mounted works by such notable playwrights as Lynn Nottage, Jon Robin Baitz, Mona Mansour and Marcus Gardley, and rapidly attracted philanthropic support.

Now Mr. Roth is out again, resigning under pressure last week after a tumultuous period that began in June when staff members filed a written complaint alleging “yearslong” problems at Mosaic, and claiming that his leadership style followed patterns of “white supremacist behavior” — a characterization he strongly disputes.

He left after taking a three-month sabbatical at the request of the theater’s board members, receiving executive coaching and submitting a “Letter of Contrition” to his fellow staff members.

His ouster comes as theaters around the country, largely shut by the pandemic, are grappling with a series of complex issues. Many are trying to combat racial injustice in light of demands made by coalitions including “We See You, White American Theater.” The #MeToo reckoning has led to renewed efforts to stamp out sexual harassment. And many companies are broadly reconsidering whether overbearing or even abusive management styles that were once tolerated are now unacceptable.

Discussing the complaints from the staff in a recent interview, Mr. Roth, 59, said, “some things were worth addressing and some were specious,” adding that he believed the plan to get rid of him “must have been happening during the sabbatical.”

The theater’s board voted unanimously to accept his resignation last week during a Zoom meeting, said Bill Tompkins, its chairman. Mr. Roth read a lengthy statement at the meeting — a version of which he has since posted on the website Medium — complaining about being shunned at the theater he had founded.

“Ari Roth is a visionary,” Mr. Tompkins wrote in a Nov. 25 letter to members of the Mosaic community that was obtained by The New York Times “However, over the course of his tenure, he has proven ineffective at consistently supporting Mosaic’s values with staff members, board members and artists.”

The internal turmoil at Mosaic culminated with a 3,500-word staff complaint in June.

“There is a documented and well-known history of the complaints artists have brought against Mosaic leadership,” read one bullet point. Another pointed to “public infighting” with the theater’s managing director. A copy of the letter was obtained by The New York Times via an anonymous email account and Mr. Tompkins confirmed its authenticity.

In the recent interview, Mr. Roth denied some of the allegations that were made, including that he had adopted tokenist attitudes toward employees and performers of color, been disrespectful of women and blocked department heads from doing their jobs. Supporters of his said that a diverse range of people could vouch for his conduct.

In the introduction to the complaint, the staff members wrote: “We see white supremacy at work at Mosaic stemming from a Cis White Male leadership with unilateral decision making power who employ harmful tactics onto staff resulting in lost time, resources, money, as well as damage to the mental health of the staff.”

But he acknowledged a series of disturbing incidents at Mosaic that have been cause for concern, including mishandling a sexual harassment complaint brought to his attention early in his tenure; dismissing a drunk actor at intermission; and awkwardly delivering critical notes to an all-female design team of one play.

The harassment complaint was made by an actress who said she had witnessed a playwright sexually harass and inappropriately touch one of her colleagues. In separate interviews, both actresses said that they were disappointed with how the situation was addressed; they said that Mr. Roth had merely banned the playwright from the theater’s green room and did not take sufficient steps to protect their anonymity.

Mr. Roth admitted he mishandled the incident, saying that he had reacted “in a hurry” and with “insufficient training.” In a later season, the actress who had brought forward the complaint asked for a sexual harassment policy to be read at the first rehearsal. It was not.

“We let her down twice,” Mr. Roth said in the interview.

Kimberly Gilbert, an actress who served as the Actors’ Equity union liaison for what she described as “a very fraught” production at Mosaic, said that Mr. Roth represented an older style of artistic director who gives instructions and expects his orders to be followed, even by a small, underpaid staff. “When work isn’t done, he gets frustrated,” she said.

“His defense is that the role of the artistic director has changed,” she said. “But everything changes. Everything evolves. We just happen to be living in a time where this imaginary rule that an artistic director’s actions will be tolerated by the people below — that rule no longer exists, and we will call people out.”

Mr. Tompkins, the board chairman, said that he did not see Mr. Roth as toxic or bullying. He said that dealing with “the good, the bad and the indifferent” is part of the artistic process. “Even I’ve been very mad at Ari sometimes,” he said. 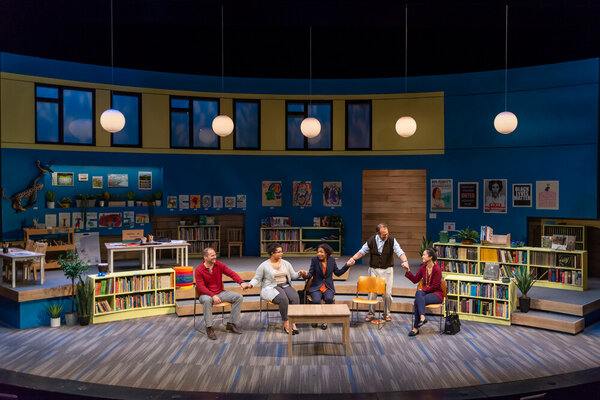 A former media executive, Mr. Tompkins joined the board at Mosaic in 2016, inspired by Mr. Roth’s ideas and his work as a playwright. In an interview, he expressed regret that the fledgling theater was losing its founding artistic director, and reiterated his support for Mr. Roth’s vision.

The deteriorating situation at Mosaic may underscore some of the challenges facing white men running theater companies dedicated to principles of equity, diversity and inclusion. Mr. Tompkins, who is Black, approved when Mosaic took up residence at the Atlas Performing Arts Center, located in a historically Black neighborhood far from other arts venues, and funders applauded that commitment.

Over five years, the new company’s charitable contributions roughly quadrupled, to $2.3 million in 2018, with support from Bloomberg Philanthropies, the Reva and David Logan Foundation and the Weissberg Foundation.

Much of that grant funding was designated for diverse programming. Before the pandemic closed theaters nationwide, Mosaic was preparing to mount a trilogy of plays examining the life and legacy of Emmett Till, by Ifa Bayeza.

Mr. Roth’s departure from Mosaic is his second high-profile exit from a Washington theater. In 2014 he was fired by Theater J, the theater at what is now called the Edlavitch DC Jewish Community Center, which he had led for 18 years.

Under Mr. Roth’s leadership, Theater J grew in reputation. He was known for staging works that offered viewpoints from across from the Arab world. The playwright Tony Kushner and Oskar Eustis, the artistic director of the Public Theater in New York, were among those who opposed his ouster.

Officials at the Community Center said at the time that his dismissal was not in response to pressure from hawkish donors or a reflection of a reluctance to air critical views about Israel. “Ari Roth’s dismissal was related to a pattern of insubordination, unprofessionalism and actions that no employer would ever sanction,” Carole Zawatsky, the former chief executive office of the center, wrote in a letter in 2014 that was released to the media.

Mr. Roth continues to maintain that he was fired from Theater J for political reasons and said that he hoped to take one of his signature endeavors from both theaters, the Voices From a Changing Middle East Festival, with him, whatever he does next.

In a statement for the board, Mr. Tompkins wrote that he hoped the theater would emerge stronger than ever.

“While our stages may be dark,” he said, “the work continues.”