“I’m going to use a word you’re not supposed to say,” the sculptor Jeffrey Lew declared with a touch of bravado. “I’m sort of a sociopath.”

In 1969 Lew and Rachel Wood, then his wife, purchased a decrepit six-story rag-salvaging factory in SoHo for $110,000. They moved into its upper floors with an assortment of kindred artists and, with fellow sculptors Gordon Matta-Clark and Alan Saret, turned the unheated ground floor and basement into a 7,400-square-foot exhibition space named 112 Greene Street (and later 112 Workshop), after its location. Subsequent shows featured a wall-mounted piece made of 500 pounds of decaying carrots, massive holes cut into the floor, and a dance troupe swinging overhead from the 17-foot-high ceiling.

Those early ’70s spectacles have since attained near-mythic status; work staged there that Lew felt museums and established galleries either couldn’t, or wouldn’t, show has since been feted in museums and blue-chip galleries. But Lew soon grew tired of the creeping professionalism brought on by a National Endowment for the Arts grant. “When I got the N.E.A. grant they said, ‘Give us your schedule.’ A schedule?” Lew recalled with a laugh. “The minute people start acting like curators, that’s when the good stuff ends.”

By late 1978, Lew said he’d had enough of committees and payroll issues. He’d already turned the building’s upper-floor lofts into co-ops, but he was still the art space’s landlord. Citing his hefty tax bill, he tripled its $550 monthly rent, fully aware that its governing board could never afford the new rate. “Like I said, I’m a sociopath,” Lew explained. “I just didn’t have any feelings whether it went under.” 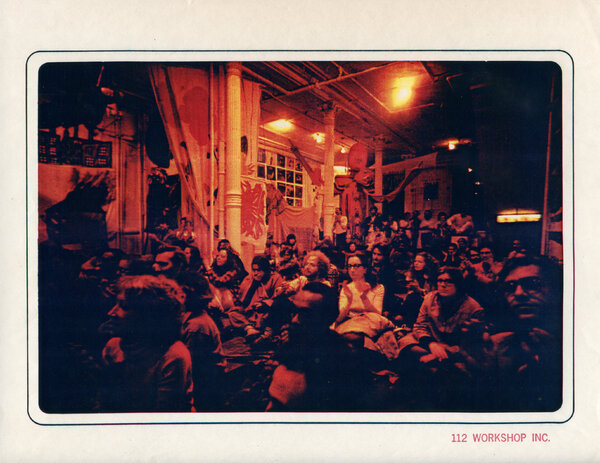 Yet 112 Greene Street didn’t die. Quite the opposite. It eventually found a new home in the West Village, as well as new leadership. Rechristened White Columns, the nonprofit became not only New York City’s longest running alternative art space, but one of its most enduringly vital. The evidence is on its walls as part of its 50th anniversary exhibition, which Matthew Higgs, the gallery’s director and chief curator since 2004, describes as part celebration and part tribute to the ongoing story of the New York art scene.

Poring over the archival installation photos and printed ephemera, what emerges is a dizzying array of artists who began their careers with solo debuts there. From John Currin and Cady Nolan in the ’80s to Rachel Feinstein and Glenn Ligon in the ’90s, no one style predominates. The common thread is simply that a given director found an artist interesting enough to present work and offer it for sale with no strings and no commissions — one of 15 to 20 such shows every year — relying on grants and donations to cover its now approximately $1 million budget.

One of Lew’s parting gifts may be precisely what allowed White Columns to continue past his brinkmanship. In late 1979, sensing a simpatico spirit, Lew encouraged Josh Baer, then 23 years old, to apply for the space’s vacant director position. Baer had no formal administrative or curatorial experience. But he’d grown up at the heart of the ’70s New York art world — his mother and stepfather were the acclaimed painters Jo Baer and John Wesley. Even more crucially, he was immersed in the new art forms bubbling up downtown. “Everything was blending together,” Baer recalled. “Hip-hop was breaking out, break dancing, graffiti art, noise music. That Gordon Matta-Clark era, that minimalist sculpture thing of SoHo, had now been replaced by a generation that’s more at home at the Mudd Club.”

Baer insisted that being chosen to run White Columns in 1979 “wasn’t a glamorous thing to walk into. It was in impossible shape.” Sighing over his own naïveté, from his current perspective as an art adviser, he added, “Only somebody that young would be dumb enough to do it.” Monthly rent may have only been $415 at the space’s next home near the West Side Highway, but that was hardly a well-trafficked art burg. Moreover, the entire year’s budget was a mere $8,000 — with no provision for a director’s salary.

The artist and new board member Mike Roddy suggested that Baer rebrand the space as “White Columns,” an architectural nod to the classically styled features of both its old and new addresses. It was also a droll statement about the rigid hierarchy of the art world being 100 percent white, Baer said critically. Hoping the frisson of spotlighting artists of color under the new name wouldn’t be lost on anyone, the updated moniker was made public for a September 1980 show featuring a sprawling subway-style mural by Lee Quiñones and Fred Brathwaite, a.k.a. Fab Five Freddy, one of the first times graffiti had been brought indoors into a prominent gallery setting.

“We were both planting our flags in a whole new atmosphere,” Quiñones said recently, speaking of Baer’s invitation to spray-paint White Columns’ interior. Indeed, his show drew a host of downtown luminaries, from the critics Edit DeAk and Rene Ricard to the writer and cable TV host Glenn O’Brien, all of whom in turn helped spark a thorny love affair between the worlds of contemporary art and graffiti which continues to this day. The buzz-laden response also firmly linked White Columns’ new identity with both the nascent East Village art scene and the art market boom as each gathered steam in the ’80s.

That soaring market — and the ability of a White Columns show to catapult an unknown artist into its midst — could take on almost ridiculous aspects. “The commercial art world is a genius in finding ways to sell things that seem unsellable,” noted Bill Arning, who became director in 1985 and is now a Houston gallerist. At the March 1988 solo debut of Cady Noland’s unsettling installations — including a pair of geriatric walkers slung over a stanchion with a photo of a pistol leaning nearby — Arning said he fruitlessly tried to convince the collectors Don and Mera Rubell to purchase a piece for $400. He said Mera Rubell eventually admitted to him that she’d ended up buying that same piece a year later, once Noland’s career exploded — for $40,000.

As the ’80s ended and the market mania collapsed, the resulting tensions rebounded inside White Columns. The painter Marilyn Minter said her 1988 solo debut there resulted in no less than 10 galleries pursuing her. Grateful to the space for plucking her out of semi-obscurity, she joined its board in 1991, happy to put her growing cachet at its service, even as her own sales slowed. “We were lucky to keep the doors open back in the ’90s,” Minter remembered. “Just keeping the air-conditioning on in the summer was a big deal!”

Despite the ’90s deepening recession, artists continued to see a White Columns show as transformational. “It changed my life completely,” John Currin said of his 1989 debut there, long before his portraits would fetch seven-figure sums at auction. “I made $5,000, that was huge! My entire income for the whole year before was $9,000 slaving away on drywall jobs.” A decade later, his wife, the sculptor Rachel Feinstein, said her own debut quickly moved her from working at the front desk of the Marianne Boesky Gallery to becoming one of its represented artists.

Accordingly, Paul Ha, Arning’s successor in 1996 — and current director of the MIT List Visual Arts Center, in Cambridge, Mass. — said he learned to set aside his misgivings at having White Columns act as a de facto “talent scout” for commercial galleries. “When you see so many people struggling, you just want to help them with their career,” Ha explained.

Higgs continued that tradition, with a notable tweak. “When I arrived at White Columns,” he said, “the question for us as an organization was what could we do that would make a difference?” The inclusion of both Black and female artists was finally on the cultural world’s radar. However, “What was strikingly obvious to me was that the work of artists with developmental disabilities was just completely underrepresented in the field of contemporary art. There were these extraordinary organizations like Creative Growth in Oakland or Visionaries + Voices in Cincinnati, supporting extraordinary communities of artists. But they just didn’t have access to the same kind of networks that artists coming out of Yale or Columbia’s M.F.A. programs might.”

Enter White Columns. Higgs has presented 25 solo shows of developmentally disabled artists so far, including William Scott, who he notes finally had a work acquired by the permanent collection of the Museum of Modern Art — 14 years after his debut at White Columns. “Patience is a key factor here,” he quipped.

Young art school graduates haven’t been entirely nixed: The painter Esteban Jefferson was an immediate sensation with his 2019 solo debut, an expanded version of his Columbia M.F.A. thesis vividly contrasting a Paris museum’s African statues with the faces of its staffers and their blandly institutional setting. But Higgs has also made a point of spotlighting barely seen older figures, from David Byrd, who drew chilling drawings of the Westchester psychiatric ward where he worked for 30 years until 1988, to Ben Morea, who created abstractions in 1964 before becoming better known as an art world provocateur and political activist. Even other venues have received attention: In 2010, the artist Margaret Lee was asked to put together a retrospective on the raucous, everything-but-the-kitchen-sink group shows she began staging in 2009 at her semi-legal 179 Canal space in Chinatown.

Lee said she was pleasantly shocked by her discussions with Higgs as she explored recreating 179 Canal’s chaotic vibe and messy energy within White Columns. “He never said ‘I don’t like the aesthetics of this.’ It was more ‘I’m around if you want to talk, but you’re free. Just be responsible.’” So, echoing the anti-guidelines first offered by Jeffrey Lew on Greene Street decades ago — Do what you want, just don’t burn the place down? “Actually,” Lee recalled wryly, “we did almost burn White Columns down. We wanted to leave a microwave running for 24 hours. Matthew said, ‘No, you cannot do that. You need a fake microwave.’ That’s where he drew the line!”