There’s a quote that takes up its own wall at the American Museum of Natural History’s newest exhibition: It’s more important to tell the truth about the president — pleasant or unpleasant — than about anyone else.

The words were written, in fact, by a president: Theodore Roosevelt. A century later, it’s hard to know if Roosevelt expected his words could be used in a context that highlights unpleasant truths of his own.

The exhibition, titled “Addressing the Statue” and opening Tuesday, is the museum’s way of contextualizing a monument of Roosevelt that towers outside its Central Park West entrance. With the president seated high astride a horse, flanked by a Native American man and an African man standing below, people who look at the statue often see a legacy of colonialism and a visually explicit racial hierarchy.

The statue was installed to honor Roosevelt, a staunch conservationist whose ties to the Natural History museum trace back to his father, a founding member of the institution. But Roosevelt’s own racist views, including statements about Native Americans and Africans, complicate the monument’s implications even further.

With the national conversation about monuments and who we choose to honor reaching a fever pitch, the “Equestrian Statue of Theodore Roosevelt” was one of four controversial memorials in New York up for a city commission to reconsider in 2017. The commission was split, and the city decided to leave the statue up and to add context. The resulting exhibition is not permanent, but the museum is looking at ways to incorporate parts of it in other areas of the institution.

The monument, which was designed by James Earle Fraser and installed on city property in 1940, has been defaced at least twice over the last few decades, including in 2017 when protesters splashed red liquid representing blood over the statue’s base. Another protest with red paint in 1971 was a response to the insult Native Americans took from the statue, said David Hurst Thomas, the museum’s curator of anthropology, who works closely with Native Americans.

[Read about a protest defacing the Roosevelt statue.]

“I was always known as the guy with that really obnoxious statue outside of his museum; I’ve never liked it,” Dr. Thomas said in an interview. “We’re supposed to be building some bridges into indigenous communities, and this is a tough way to do it.”

“But that said, I don’t think that we ought to just blow it up,” he added. “I think it’s a statement in time about where the museum was.” 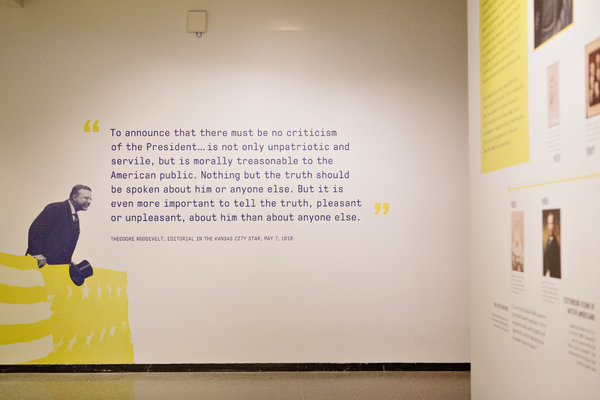 “Addressing the Statue,” with an accompanying video and website, examines various aspects of the monument and the president it memorializes. It explores the history of the statue’s design and installation, who the men at the bottom of the statue may represent and Roosevelt’s own racism. The museum examines its own complicity at points, too, with references in the video to its exhibitions on eugenics in the early 20th century.

“The museum is making a really explicit statement that we’re big enough to stand up for our past,” Dr. Thomas said. “We’re not going to cover it up. We’re going to welcome dissent.”

A wide array of opinions on the monument are prominently featured as part of the exhibition. Gathered from academics and artists as well as from museum visitors from around the world, they are displayed on the adjoining walls.

The voices seem to be as split as the commission was. Those in favor of taking it down say the monument doesn’t represent the city’s values in the way that art in public spaces should. One young girl suggested making a new statue with all three men riding a horse as equals; a man from Queens said to stick a dinosaur in that spot instead — “Anything else but this.”

But there are certainly other perspectives, including those who argue to keep the statue where it is to show where America has been and where the country has to go. The majority of opinions seem to agree with exactly what’s being done, in providing visitors with more information.

Ideally, exhibition visitors will be able to identify some views that amplify their own and others that offer a new perspective, said the museum’s vice president for exhibition, Lauri Halderman.

Providing context is exactly the role of a science-based institution, the museum’s president, Ellen V. Futter, said in an interview. The Natural History museum has already taken a second look at other displays in the same light: The Old New York diorama that includes a stereotypical depiction of Lenape leaders, for example, now has captions on the glass explaining why the display is offensive.

“People used to walk by that diorama and pay absolutely no attention to it,” Ms. Futter said. “Now, they are stopping, they are reading it, and it’s having a high impact.”

“That’s one of the things we hope for from this exhibit: that people won’t just walk by,” she added, “that they’ll think about it with all its problems and really consider what it’s about and what it means, why it matters.”

But some think this move isn’t enough. Mabel O. Wilson, who served on the city commission to reconsider the statue and was consulted on the exhibition, still wants to see the statue moved elsewhere.

“I think it’s a starting point, both for the institution and its visitors,” said Dr. Wilson, a professor of architecture and African-American and African diaspora studies at Columbia University. “I hope it prompts visitors to pursue their understanding of history in a way that really starts to wrestle with history and these truths that we see being told.”

But the museum doesn’t see that additional complexity as an issue. With 150 years of history behind the museum, Dr. Thomas said that “Addressing the Statue” should be a place to complicate the conversation, rather than smoothing it over.

“It’ll never be enough, but maybe it can kind of keep this going,” Dr. Thomas said. “Fifty years from now, who knows where that’s going to be?” 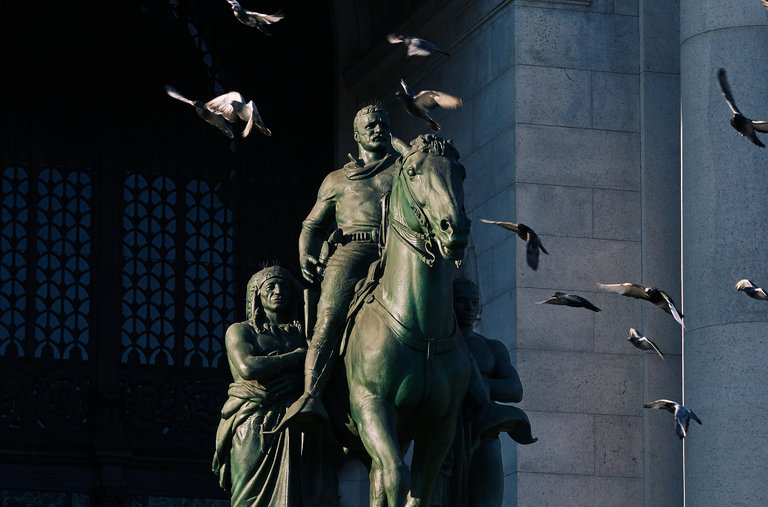