On a recent day in the top-floor gallery of the Guggenheim Museum, Chaédria LaBouvier, a 34-year-old independent curator and the first black woman to organize a solo exhibition at the Guggenheim, contemplated the small, ostensibly minor painting by Jean-Michel Basquiat that drove her to years of fervent research.

In the Basquiat canon, it was “a not very good scrap of painting,” The New Yorker critic Peter Schjeldahl recently wrote. It was almost not a discrete work of art at all. Mr. Basquiat painted it directly onto Keith Haring’s studio wall; it would have been lost had Mr. Haring not cut it out and set it like a masterpiece in the ornate frame it still inhabits. (It was over Mr. Haring’s bed at the time of his death.)

But “Defacement (The Death of Michael Stewart)” is also, as far as Ms. LaBouvier or anyone else has determined, the only work in Mr. Basquiat’s vast oeuvre that addresses a current event of his time — a gruesome tragedy that took the life of a young black artist and shook the Lower East Side art community.

“This was a form of evidence, in a sense,” Ms. LaBouvier said.

Her show, “Basquiat’s ‘Defacement’: The Untold Story,” centers on this piece as it develops a picture of the death of the 25-year-old man grievously injured in transit police custody and its effect on other artists. The exhibition argues for a fresh look at the impact of the racial tension of the 1980s on Basquiat and his peers. In so doing it uncovers new material, including several works that important artists made in response to the incident that have never been shown before. And it presents, for the first time, some of the artwork that Mr. Stewart himself had been making.

Exactly what happened when the police apprehended Mr. Stewart, a Pratt Institute student, at the First Avenue subway station in the early hours of Sept. 15, 1983, remains unsettled, many years after a grand jury’s decision not to indict several officers, and a subsequent settlement awarded to the Stewart family. What is known is that the police brought him, hogtied and badly injured, to Bellevue Hospital, where he died after two weeks in a coma. 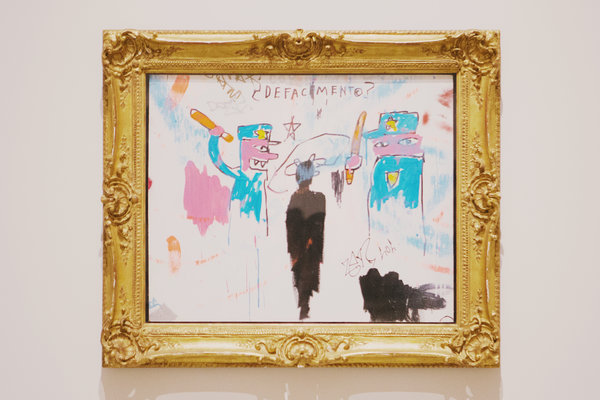 Mr. Basquiat’s piece shows two red-faced police in blue uniform, one baring pointy teeth, with batons raised over an all-black silhouette. The word “¿DEFACEMENT©?” is printed above them in the familiar Basquiat scrawl.

The piece was never sold (its owner is Nina Clemente, Mr. Haring’s goddaughter) and has seldom been shown. Its most recent appearance was in a one-work exhibition and discussion program Ms. LaBouvier organized at the Williams College Museum of Art in 2016.

The current exhibition puts it in a double artistic context. Eight classic Basquiat works from 1982-83, are shown in the same room, including, pointedly, two pieces that present racialized police figures, “La Hara” and “Irony of a Negro Policeman.”

They attest to his awareness of the constant menace of policing to young black men like him, and the psychic burden that came with it.

“I think there are critics who have underestimated the centrality of that threat,” Ms. LaBouvier said. “You can almost feel the heat from the paintings.”

Walk past a blown-up Haring photograph of his studio wall, with the Basquiat piece cut out, into the exhibition’s second room, and second layer of context, and you will find works by Mr. Haring, Andy Warhol, David Hammons, Eric Drooker, George Condo, David Wojnarowicz (whose unsigned protest flyer clearly inspired Mr. Basquiat’s painting), and Lyle Ashton Harris. All respond, whether in the heat of the moment or years later, to Mr. Stewart’s beating and death.

Some have never been shown — including Mr. Condo’s “Portrait of Michael Stewart,” which he made while Mr. Stewart was still in the hospital, and stashed away in storage.

There are also pieces of ephemera that testify to the community’s mobilization, including issues of the alternative magazine East Village Eye and programs for nightclub benefit events for the Stewart family. Crucially, Mr. Stewart’s small paintings and drawings, lent to Ms. LaBouvier by his family, are an emotional anchor. Often described as a graffiti artist — in the police version, he was caught tagging the station — he was in fact a painter with an abstract sensibility, who was planning his first exhibition.

Jeffrey Deitch, a gallerist and curator who was close to the artists of the era, said that for all Mr. Basquiat’s celebrity and his soaring prices (a Japanese collector paid $110.5 million in 2017 for his painting of a skull, “Untitled”) the scholarship remains thin, and important aspects of New York art culture of the early 1980s are yet to be addressed.

“The story of Michael Stewart galvanized the downtown art community,” Mr. Deitch said, agreeing with Ms. LaBouvier. “It was the subject of a lot of anger and activism for some years, not just the few months after the incident. The reaction prompted some very powerful works of art.”

Of Ms. LaBouvier’s approach, he said: “I told her that in our field we’ve been waiting for someone like her to emerge for 40 years — a young woman who can look at this period in art history from a fresh perspective.”

Though her formal specialty is film — her graduate degree from U.C.L.A. is in screenwriting — Ms. LaBouvier’s fascination with Basquiat goes back to her childhood in Texas, where her parents owned a pair of the artist’s drawings. She first saw an image of “Defacement” in 2003, while in college at Williams in Massachusetts.

When she returned to her alma mater with the actual painting, she held public programs around it that focused on police use of force and the Black Lives Matter movement. Her own brother, Clinton Allen, who was unarmed, was killed in a confrontation with a Dallas police officer in 2013, but she cautioned strongly that her research should stand on its own merits.

“Biography is not and never has been scholarship, whether it’s mine or someone else’s,” she said. “I think that insistence on inserting my biography not only flattens me and my work, but is informed by this social expectation that black women are broken.”

The Guggenheim exhibition emerged from conversations with Nancy Spector, the museum’s chief curator. Ms. LaBouvier said that assembling the show, however, exposed fault lines that she attributed to the Guggenheim’s inexperience with black curators and their perspectives, especially with regard to nuances of black life and identity.

“I think it will be better for the black curators coming after me,” she added. “For instance, if I didn’t review something, that meant that no person of color looked at that document or process. And certainly it felt at times that there was an expectation that I would just be grateful to be in the room.”

She is proud of the exhibition but alluded to editorial frictions: For instance, she said, the museum did not produce extended captions that would explain each work and the reason she chose it, an omission that she said shortchanges her research. “My hands were somewhat tied with that,” she said.

In its 80-year history, the Guggenheim has never had a black staff curator. The independent Nigerian curator Okwui Enwezor was one of several organizers of a show on African photography in 1996. The artists Carrie Mae Weems and Julie Mehretu are among six artist-curators in the current exhibition “Six Takes on the Guggenheim Collection.” The museum also noted it has hosted nonexhibition programs convened by Ms. Weems (2014) and Simone Leigh (2019).

In a phone interview, Richard Armstrong, the Guggenheim’s director, acknowledged that the museum has been “slightly off-tempo” with respect to hiring African-American curators, and that efforts are underway to address this. “I want to reaffirm that we are in the midst of a concerted effort to broaden our curatorial staff,” Mr. Armstrong said.

In an email responding to questions, Sarah Eaton, a spokeswoman for the Guggenheim praised Ms. LaBouvier’s original research and said she had participated in a “rigorous editorial process” with input from staff.

Ms. LaBouvier’s essay in the catalog suggests the forensic research involved in making the show. She also interviewed 23 artists, gallerists and others in Mr. Basquiat’s orbit, along with Michael Stewart’s mother, Carrie, and even a member of the initial grand jury.

For Mr. Condo, the painter, the project brought back heavy memories. He had been out with Mr. Stewart earlier on that fateful evening. There had been a party at Mr. Haring’s, but the two men were not let in. “We weren’t cool enough, or whatever,” Mr. Condo said. Instead they went to the Pyramid Club on Avenue A, before parting ways.

After the news spread, Mr. Condo painted his portrait of Mr. Stewart — an eerie image of a figure hooked up to a satellite-dishlike device, a reference to the young man in the hospital. He had no intention of showing it.

“I just went home and cried and made a painting,” he said.

Ms. LaBouvier’s inquiries prompted him to dig out the work.

“This exhibition was necessary,” he said. “Putting a real microscope onto that particular period leaves a real impression on you as to what people were feeling, as a result of what happened to this man.”

Ms. LaBouvier said that Mr. Stewart’s story, his own art, and the art that his death prompted, in anger and mourning, deserved consideration from a scholarly perspective.

“I am very clear that this is restorative justice in an art-historical way,” she said. “There are a lot of stories that we need to re-examine, reclaim, re-treat. This is one chapter among many.” 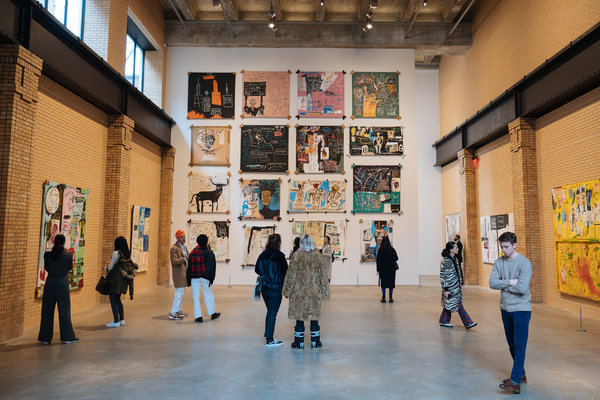