Theaters shut down, but dance didn’t. There was dancing in the streets and dancing on screens. Old treasures spilled out of the vaults. 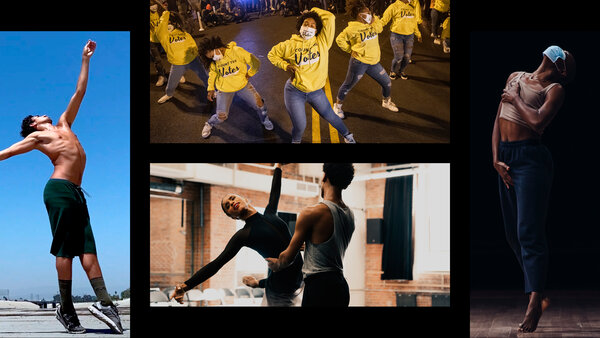 Best of 2020 | Best Retrospectives | Best of the Street

The coronavirus has interrupted and upended the performing arts, but it’s also made something clear about dance: It isn’t beholden to a proscenium stage. Its visibility, through TikTok, Instagram, YouTube and, yes, even people on the street, has been undeniable, even with theaters shut down. Dancers are still performing and choreographers are still creating, be it for a premiere on video, a reinvention of a classic or a combination of the two. While there’s no denying that this is an incredibly difficult time for dance and dance artists, it’s also been a privilege to witness such imagination and resilience.

As soon as quarantine began around the world, dancers started teaching classes on Instagram, while TikTok became a stage for everyday movers and professionals alike. It was a generous and collective response to the time; for an hour anyway, the sound of ambulances could be drowned out by Ryan Heffington’s Sweatfest or the calm yet firm voice of Tiler Peck, using a counter as a ballet barre as she directed us through our pliés. 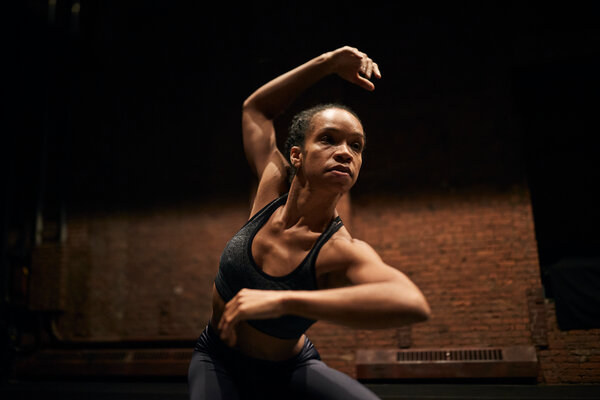 When early in the pandemic, digital dance was not capturing my attention — truthfully, very little did — the choreographer Alonzo King released the first in a series of five videos, “There Is No Standing Still,” set in the natural world. Its depth and sensitivity radiated out of the screen. “You can’t beat away the darkness with a stick,” he wrote in his artistic statement, “you have to open the window of intelligence for light to enter.” Finally, here, it did.

Out of social distancing necessity, the solo has emerged as an obvious and meaningful form of choreographic exploration. One solo project was astounding in the way that it looked to the past to bring digital dance into the present. Molissa Fenley’s forceful and unsparing “State of Darkness,” from 1988, set to Stravinsky’s “Rite of Spring,” was reimagined this year for seven dancers: Jared Brown, Lloyd Knight, Sara Mearns, Shamel Pitts, Annique Roberts, Cassandra Trenary and Michael Trusnovec. Their performances, broadcast live from the stage of the Joyce Theater, were courageous, frightening and heart-rending.

This choreographer, who lived through the AIDS crisis, never left the performance world, but his artistic voice is more potent than ever. After “Deep Blue Sea,” his ambitious production for the Park Avenue Armory was canceled because of the pandemic, he told his company, “You will be able to survive, but life will change.” He knows that firsthand. His latest ventures — “Afterwardness,” a socially distanced work culled from archival repertory, and “Our Labyrinth,” a video collaboration with Lee Mingwei — have demonstrated an unflinching look at the world, both as it was and as it is now.

With her ravaged and otherworldly performance in “State of Darkness” at the Joyce and her methodical and meditative one in “Our Labyrinth” at the Metropolitan Museum of Art, Ms. Mearns showed us two very different sides of herself — each indicating a deepening sense of purpose and fearless commitment. We’ve always known how versatile this principal at New York City Ballet is; the pandemic has given her time to experiment, and it doesn’t seem as though her capacity to grow is coming to an end anytime soon. She isn’t just a ballet dancer dipping her toe into new forms; she gets inside of them.

At the start of “Hope Hunt and the Ascension Into Lazarus” in March, Oona Doherty, a contemporary dance artist based in Northern Ireland, spilled out of a trunk of a car to open her performance on the sidewalk in front of the 92nd Street Y. As she made her way into the Y’s Buttenweiser Hall to present her piece — an astounding, nuanced look at the men of Belfast — we followed, rapt, especially after she screamed, “Get into the theater!” Wavering between tough and vulnerable, Ms. Doherty’s look at masculinity was the most memorable live dance performance before the shutdown; now it’s a tantalizing memory of that thrill.

Training (and changing) the next generation of ballet dancers

Aesha Ash, a former New York City Ballet dancer, left the company when it seemed like she would not advance up the ranks. This fall, she returned as the first Black female member of the permanent faculty at the company-affiliated School of American Ballet. It’s overdue, but a crucial step to creating a more integrated ballet universe. Also encouraging: In September, Andrea Long-Naidu, another Black, former City Ballet member, joined the faculty of Boston Ballet School.

Best thing to come out of working from home

The veteran choreographer David Gordon — a founding member both of the 1960s collective Judson Dance Theater and the improvisatory group the Grand Union — can’t venture far from his SoHo loft because of the pandemic. But Mr. Gordon, 84, managed to squeeze a lifetime of work into a riveting film, “The Philadelphia Matter — 1972/2020,” in which Philadelphia dance artists perform material from three of Mr. Gordon’s works. It is an engrossing, unsentimental continuation of his work on “The Matter,” which he first presented in 1972.

Activism and dancing in the streets

It’s been a powerful last few months: The dancing that spilled out onto the streets during protests against racial injustice and after the election let the body scream and sing. And with the precarious situation that the pandemic has thrown the dance world into, artists are responding — eager to fight for equality, to give dancers a voice and to look at how the culture of the art form can be reinvented. The exciting part is how it is a group effort: Dance artists are joining forces to affect change.

It doesn’t have to be a show about dance. Dance is everywhere on TV. “The Crown,” “Derry Girls,” “The Marvelous Mrs. Maisel,” “Giri/Haji.” (Though the “Giri” choreography was jaw-dropping in all the worst ways.) A recent random sighting: the Season 2 finale of “Pen15,” in which — during the performance of a high school play — the cast suddenly breaks out in a choreographed labyrinth of simple gestures. The final shot ends with a gesture, too; in that second, the shape of an arm says more than a word.

On March 8, I spent the afternoon at Dance Theater of Harlem watching a run-through of “Higher Ground,” a new ballet set to socially minded songs by Stevie Wonder. The work, by the company’s resident choreographer, Robert Garland, was vital in that moment but feels prescient after the death of George Floyd and the Black Lives Matter protests that took over cities this summer. The combination of Mr. Garland’s rich movement vocabulary, which mines and melds ballet with modern dance and street forms, and Mr. Wonder’s music was intoxicating — a promise for the future.

Among the silver linings of 2020: forced retrospection. Though I witnessed some live dance before March (and even some since), and I watched many videos created as choreographers tried to learn to be filmmakers, what most stands out in my mind are the recordings of older works that became available online this year.

Some were very old, like the rare films of Martha Graham works from the 1930s and ’40s that her company streamed in its “Martha Matinees” series. Seeing Graham herself blazing in “Letter to the World” collapsed the distancing of time and rote acclaim. The thrill wasn’t gone. It sparked through the screen.

That’s how I felt about the early Mark Morris pieces from the 1980s that the company released in its Dance On! Video Vault. Grainy footage confirmed greatness I had only read about. And the experience was similar with the 1987 film of “Creole Giselle” that Dance Theater of Harlem pulled from the shelf for its DTH on Demand series. It was even more beautiful than advertised.

The gifts didn’t have be decades old. The Joyce Theater, through its resourceful JoyceStream programming, cast a light on wonderful recent work that I had missed, like Deeply Rooted Dance Theater’s searing 2017 production of “Indumba.”

And other streamed work was still fresh in my memory: Pam Tanowitz’s sublime “Four Quartets” filmed at Bard College in 2018 or the live-music performance of Ronald K. Brown’s “Grace” filmed there last year or Dormeshia’s “And Still You Must Swing” at the Joyce in the final month of 2019.

Those were dances I had seen and loved live in the theater. But seeing them again, at home in 2020, I loved them more — for themselves, and for preserving what I love most about dance, keeping that spark alive, at least digitally, in these extraordinarily challenging times.

Best of the Street

On a Saturday afternoon in July, I looked out my living room window and saw what had become a rare sight: a live dance performance. On a stoop across the street, for a small audience that had gathered on the sidewalk, a lone dancer was swaying, crouching and reaching to the sky, her energy coiling inward and rebounding out. Within the limited square footage of her stage, she seemed to keep uncovering new pathways, new possibilities.

The dance, it turned out, was part of the annual STooPS BedStuy Art Crawl, an event started in 2013 by the dancer and choreographer Kendra J. Ross, to bring art and performance to the stoops, yards and storefronts of Bedford-Stuyvesant, Brooklyn. (This year it took place at just one address, while also streaming live to Instagram.) The soloist was Mikaila Ware, a member of the social justice-oriented dance company Urban Bush Women, with whom Ms. Ross has also worked. Later that day, closing out the lineup of music, stand-up comedy and more, Ms. Ross performed her own big-in-a-small-space solo, a euphoric dance of gratitude for her collaborators and community.

In a year that has brought so much hardship to artists, singling out “the best,” always a dubious task, appeals to me even less than usual. But when I scan my mind for moments that stood out in 2020, the memory of this neighborhood gathering swims to the surface. At another time, if not kept close to home by a pandemic, I might have been on my way to a Saturday matinee in another part of town, or some remote summer dance festival. But slowing down and staying in allowed for a shift in focus: an opportunity to see what was, and has been, right in front of me.