It’s important to remember that graffiti was never just one thing. Within a few short years from when scrawled tags first went up on walls and trains, graffiti became marketing, fine art, politics and more. The form evolved rapidly and spread widely, captured in an eternal tug of war between external legitimacy and internal credibility, between the outlaw fringes and solvency.

Admirably, the traveling exhibition “Beyond the Streets” tells both of those stories side by side, and sometimes all at once. Curated by Roger Gastman, it takes up two floors of a huge new development in Williamsburg, Brooklyn. Less a narratively driven exhibition than a themed amusement park of all things graffiti and post-graffiti, it embraces the movement’s many tributaries — even ones that seem at odds with one another, via an epically scaled show that takes in historical images and contemporary art, hyper-stylized abstraction and gut-level immediacy, news accounts and ephemera. 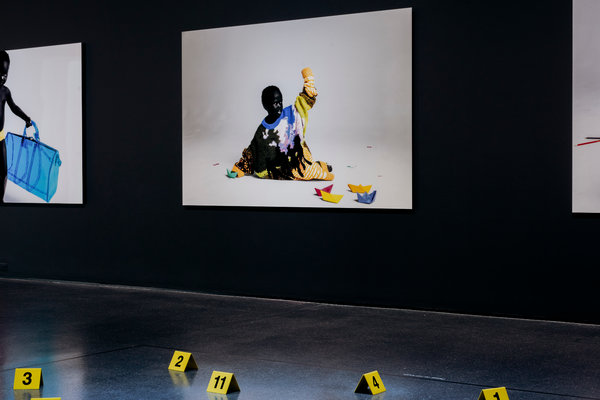 “Beyond the Streets” is at its best when assessing how the meaning of the graffiti impulse changes when the context is moving between oppositional and welcoming. Among the most striking contributions to the show are a series of lived environments — “The Vandal’s Bedroom” by Todd James is a vitrine holding an imagined graffiti writer’s private space. Small pieces cover every available surface, capturing the tension between the interiority of artistic impulse, the public presentation of graffiti, and the desire by outsiders to keep it contained. Just behind it, the tattoo artist Bert Krak and the artist Alexis Ross installed a full house-front decorated in tattoo flash sheets, a blend of the outlaw and the familial that on some days serves as a functioning tattoo parlor. 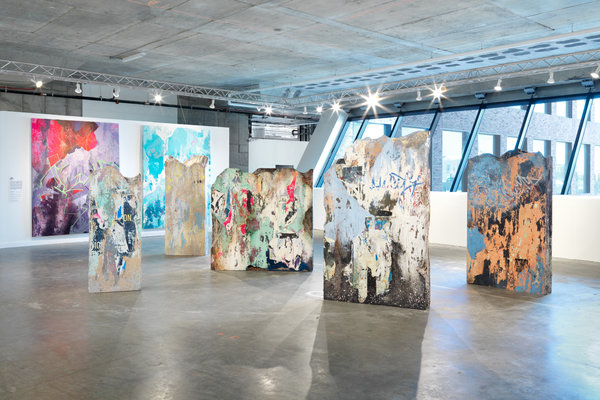 Much of the great graffiti has been lost to time (and visionless authorities), of course — Henry Chalfant’s photos here serve both as art and historical record. But some of the most provocative works in the show suggest that graffiti has evolved far beyond letters and form. Take José Parlá’s free-standing Stonehenge of scraped-up collage slabs that look like they were cut off construction sites. They suggest that urban decay itself — the way the city acquires and sheds layers, and has its past always peering out from underneath the present — is, in essence, graffiti.

Graffiti is a career now, as well. The exhibition’s second half, especially, acknowledges the way graffiti has become consonant with marketing, which is why the renegade gestures in those sections speak loudest: Craig Costello’s drip art mailboxes, or the smiley faces painted by spray-can-wielding drones by KATSU, though those are less thrilling than his invasions of public space documented in the show’s impressive catalog.

Once rebuffed almost everywhere, graffiti is now welcome almost anywhere: other art practices, other media, other philosophical zones. Look at the career of Futura 2000, represented in this show by one of his “Pointman” sculptures and some paintings, but who also has recently collaborated with the Mets, and also with Virgil Abloh (who is himself something of a graffitist). But maybe that’s not so different than the early-to-mid 1980s photos displayed here of storefront gates turned into exuberant murals — graffiti as intrusion, but also embrace.

Jon Caramanica is a pop music critic for The Times and the host of the Popcast. He also writes the men’s Critical Shopper column for Styles. He previously worked for Vibe magazine, and has written for the Village Voice, Spin, XXL and more. @joncaramanica