When theater came down with Covid-19 last March, musicals got an especially bad case. Difficult and expensive to produce in the best of circumstances, they proved, in the worst, nearly impossible. Yes, the internet gave us revues, tributes, cabaret acts and fund-raisers, but only a few new works that could reasonably be called musicals. Even then, they were weird; one (“Ratatouille”) starred a TikTok rodent.

Was the problem a mismatch of the moment and the form? If so, “Breathe,” an ambitious but underwhelming anthology of linked mini-musicals, has certainly sought to correct the problem, telling five stories set during lockdown. Conceived by the novelist Jodi Picoult and the playwright Timothy Allen McDonald, and set to music by five songwriting teams, “Breathe” mostly focuses on the way the pandemic has affected couples, in various ways suggested by the symptoms that give each chapter its title.

In the first, called “Fever,” the meaning is both literal and figurative. Alison (Denée Benton) wakes up on March 13, 2020, in the bed of a man she’s met at a wedding in Mexico City. Late for her trip back to New York, she discovers that all future flights have been canceled, so Jerry (Rubén J. Carbajal) suggests she stay with him. This meet-cute of opposites — he’s a coaster-using architect, she’s a freewheeling nurse — turns suddenly more serious when Jerry cooks Alison his abuela’s chili relleno but she is unable to smell or taste it. We know what this means, though they don’t.

If this is a promising premise, what can you do with it in just 22 minutes? The usual song-scene-song alternation would take too much time, so Rob Rokicki and Rebecca Murillo, like many of the “Breathe” songwriting teams forced into too-short formats, have instead created noodly sequences out of melodic fragments and interstitial dialogue. When the lyrics are specific, these are apt enough, but without sufficient narrative underpinnings, the inevitable stretch toward bigger sentiment mostly results in soup. 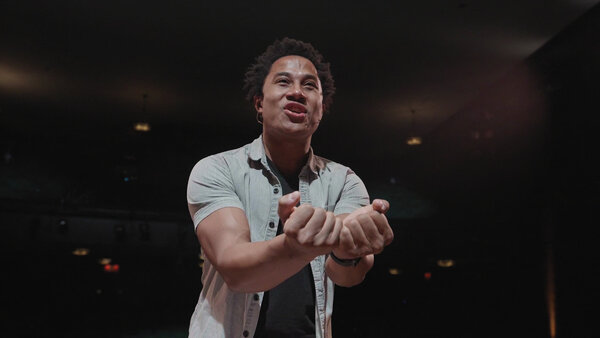 Still, “Fever” is a pleasant enough opening, and Benton and Carbajal, directed by Emily Maltby, make it look smooth and easy. That’s pretty much always the case in “Breathe,” even though the entire show was filmed, at the 92nd Street Y in New York, without scenery or props, and with just a piano accompaniment. The orchestrations were seamlessly backfilled later — or “reverse engineered,” as Picoult told The New York Times.

The reverse engineering of the second chapter, “Aches,” is not so successful; its plot, about a quarantining gay couple who completely mistake each other’s intentions, never rings true. If Theo (Max Clayton) and Max (Matt Doyle) at least seem like a couple, that may be because Clayton and Doyle really are one; they bring internal authenticity to a story motivated by unlikely externalities.

Perhaps the O. Henry-ish twists, including the hoary reading of a crumpled letter, would have worked better if given more room to play out, but all five chapters wind up cannibalizing one another for time. As it is, the plot reversals — Max is expecting a marriage proposal but Theo is planning to break up instead — barely register before another reversal and, soon enough, another chapter come along. There’s little the director, Joe Barros, can do to vary the tone or complicate the pair’s few signboarded traits: Max, hyper-romantic and dim; Theo, wolfish and opportunistic.

I’m all for opportunism, and even cannibalism, in a musical, but “Breathe,” most of which was scripted by Picoult and McDonald, seems unwilling to make anyone a villain. Instead of faults, its characters have failings: problems that, unlike Covid itself, are quickly correctable. Perhaps that’s why most of the chapters are tied so weakly to their title symptoms — or, for that matter, to the pandemic, which is vaguely blamed in “Aches” for forcing too much intimacy on a pair that wasn’t ready for it.

Music can help develop that subtlety if there’s enough of it, but with room for only a few songs, the pop-rock numbers by Daniel Mertzlufft and Kate Leonard, who were among the creators of “Ratatouille,” are too relentlessly upbeat to introduce much complexity here.

That “Breathe” overall is likewise upbeat is bizarre for a musical that updates the pandemic death toll between scenes. The tonal confusion continues in “Swelling & Irritation,” in which the difficulties a married couple faces during lockdown are mostly played for laughs. It’s true that Kate (Patti Murin) and Adam (Colin Donnell) are, as one of the extremely catchy songs by Doug Besterman and Sharon Vaughn has it, “the lucky ones.” They may be trying to maintain their careers while home-schooling three children with no nanny, but they’re doing it in an Upper West Side townhouse.

Murin and Donnell — another real-life pair — sail right over the tonal chasm of that setup with their precision comic performances, and the director, Lorin Latarro, carefully modulates the mood to allow a switcheroo ending that, unlike the others, is touching, not annoying.

I would have been glad of any switcheroo in the rigidly formulaic “Fatigue,” with a book and lyrics by Douglas Lyons and songs by Lyons and Ethan Pakchar. “Fatigue” has nothing at all to do with the pandemic, except that the murder of George Floyd happened in its midst, which makes the chapter feel shoehorned into to the show.

Surely it would take a whole play — and indeed it has taken many — to properly tell the story of Devon (Daniel Yearwood), a Black teenager who is roughed up after a protest by a white police officer (Josh Davis) who happens to work in the same precinct as Devon’s father, Shawn (T. Oliver Reid).

Though its few songs, including a protest speech set strangely to an R&B groove, are beautifully sung, especially by the appealing Yearwood, “Fatigue,” directed by Zhailon Levingston, aims at too many important targets to hit any squarely. The final chapter, “Shortness of Breath,” directed by Jeff Calhoun, has the opposite problem: It’s perfectly crafted to hit negligible goals.

That it stars Kelli O’Hara as an embittered Upper East Side wife and Brian Stokes Mitchell as the husband she’s divorcing gives it the silkiness of high-thread-count sheets, and naturally the songs by Zina Goldrich and Marcy Heisler get their considerable due. But the shift that leads to its by-now-predictable gasp-worthy ending comes off as mere gimmickry: a trick of the hands, not the heart.

“Breathe” as a whole suffers from the same ailment. Instead of expressive story development it depends on arbitrary structural tactics for its effects: not just the reversals and the symptoms-as-titles, but also the pointless weaving of characters into one another’s stories. Alison turns out to be Devon’s sister; Devon delivers Uber Eats to Kate and Adam. So what?

Contrivances like that may have made it possible for a project written by so many hands to cohere under such difficult circumstances, but they can’t make the result mean much. Even the pandemic is eventually sapped of its importance in a brief epilogue that, in tying all the knots, resolves them way too happily. Worse, it offers a trite moral that, however true of life, is rarely true for musicals: “So much can happen in a second.”