Britney Spears’ relationship with ex-boyfriend Justin Timberlake isn’t exactly looked back at fondly by fans.  While the two dated decades ago, it wasn’t until Timberlake faced extreme backlash from FX’s The New York Times Presents: Framing Britney Spears documentary that highlighted the “Mirrors” singer’s poor treatment of his former girlfriend. In response, Timberlake issued a too little, too late apology on his Instagram directed at Britney and his co-headliner at the 2004 Super Bowl, Janet Jackson, back in February. Britney, of course, never acknowledged the apology but now in a surprising move — and nearly two months later — the “Toxic” singer has shared a photo of her and her ex-boyfriend with Jamie Lynn Spears in honor of her sister’s birthday. Needless to say, the rare throwback snap left many of her fans confused and had some questioning whether it was really Britney who had made the post. (See Britney’s IG post here). 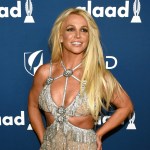 “Happy belated birthday to this beautiful soul 🎂🎂🎂 !!!” Britney began her birthday tribute to Jamie alongside the photo of her, her younger sister, Timberlake, and another woman. She continued, “I love you so much and damn it I wish I was as smart as you at 30 !!!! It’s weird to say that I was basically your momma when you were younger and yes I’m still older but your soul is and always has been wise !!!!”

The iconic singer went on to write that she is “truly and genuinely inspired” by her sister’s “path” and the “life you have created for your beautiful children.” She added, “I’m so fucking proud to call someone as beautiful inside as you my sister !!!! And not only are you a beautiful soul you’re so DAMN STRONG,” before she went on to recall previous wrestling matches she and her sister used to have at home.

“PS I wish I was as strong as you and happy birthday 🎊 !!!!” Britney concluded her post.

Immediately, fans flocked to the comments to share their thoughts on the curious photo of Britney and her ex attached to her sister’s birthday post. One user wrote, “Its Britney & Justin in the right side corner for me 😍. Glad she chose this picture. Now someone investigate 🔎,” while another chimed in to say, “Does she not have a pic with only her sister and not JT in it?!?”

Undeniably, it’s an interesting photo for Britney to choose from and we’re guessing that the inclusion of Justin Timberlake didn’t exactly help debunk fans’ running theory that it’s not Britney behind her social media accounts.

Before you go, click here to see all the celebrity couples with the best stories behind how they met.