In the four decades since it was released, bearing the cover image of a motorcyclist blasting out of a graveyard on his bike, the Meat Loaf album “Bat Out Of Hell” has been described in many ways. Bombastic. Extravagant. Over-the-top.

But as Jim Steinman, the album’s composer and lyricist, said recently, “If you don’t go over the top, how are you ever going to see what’s on the other side?”

Listeners know “Bat Out of Hell” best for Meat Loaf’s indefatigable vocal performances, and for marathon-length power ballads like “Paradise By the Dashboard Light,” an enduring ode to adolescent horniness, and the title track, in which a lovelorn biker operatically eats it after misjudging a sudden curve.

The music, however, is Mr. Steinman’s creation; the songs and the restless impulses underlying them predate his professional career as a hitmaker for pop artists like Air Supply, Bonnie Tyler and Celine Dion.

They are fragments of an even more ambitious project that he has imagined since his undergraduate days at Amherst College in the late 1960s — a stage musical that would celebrate the allure and angst of being young.

“I grew up in a time when the youth were rebelling against the status quo,” Mr. Steinman, now 71, said in an email interview. “I thought it would be amazing to be able to be a teenager forever. Of course it does have its drawbacks, but what the hell, what doesn’t?”

It took a half-century of development for Steinman to realize a version of this dream when his show, titled “Bat Out of Hell — The Musical,” opened in 2017. Though its songs may be pure ear candy to fans, they encapsulate for him a lifetime’s worth of stops and starts, frustrating near-misses and occasional head-on collisions with Meat Loaf, his friend and collaborator.

Now the production is coming to New York, though not without a few twists and turns and one near-total wipeout.

On a Friday afternoon earlier this month, the musical’s cast was rehearsing in a midtown Manhattan studio space, ahead of the show’s August 8 opening at New York City Center. (Preview performances begin on August 1.)

Here, the show was stripped bare of its telltale pyrotechnics, its glitter bombs, robot bats and simulated motorcycles that speed across the stage.

In one room, dancers were thrusting and pivoting while a pianist banged out the chords to “Bat Out of Hell.” In another room, the actors Danielle Steers and Tyrick Wiltez Jones were rehearsing a scene that sets up “Two Out of Three Ain’t Bad,” a not-quite-love song that they perform as a duet.

While Mr. Jones pondered a line of dialogue in which he told Ms. Steers, “I’ve seen you come here before,” the director, Jay Scheib, carefully offered the actor a note: “Put in a break before ‘before,’” Mr. Scheib said. He added, “And then wink at her.”

From its inception, “Bat Out of Hell” has swerved all over the boundary between sincerity and absurdity. As an Amherst student, Mr. Steinman first conceived of and starred in “The Dream Engine,” a rock musical about a tribe of wild teens in a dystopian metropolis. Joseph Papp, the Public Theater founder, expressed interest in the project, and over the next several years, Mr. Steinman adapted it into a new work called “Neverland,” with characters and settings that more overtly referenced J.M. Barrie’s “Peter Pan.”

It was during this time that Mr. Steinman met Meat Loaf, the actor and singer, who’d come to the Public Theater for an audition. “I weighed 300 pounds at the time,” said Meat Loaf, who was cast in a 1973 Vietnam War musical called “More Than You Deserve,” which Mr. Steinman had helped to write.

Meat Loaf, who sang the title song, said his work with Mr. Steinman on the show established the fundamental dynamics of their partnership.

“I never ask Jim what his inspiration for a song is,” he explained. “And Jim has never asked me what character am I playing in my head when I sing it.”

“Neverland” was presented as a workshop but the production was unable to obtain formal rights to use its “Peter Pan” elements and it stalled out. Undaunted, Mr. Steinman resurrected some of its songs in “Bat Out of Hell,” a rock album produced by Todd Rundgren and released in 1977.

Meat Loaf was the voice and the sweat-drenched face of the album — it’s his name that appears emblazoned on its cover, above a smaller credit reading “Songs By Jim Steinman” — and he said he was more than just a vessel for Mr. Steinman’s music.

“I know there’s people out there that think I was the Frankenstein monster to Jim’s Dr. Frankenstein, but that’s not how it went at all,” Meat Loaf said. When he sings a song, Meat Loaf added, “I never do anything the way the writer intended it. Jim wrote it, but it became my song.” 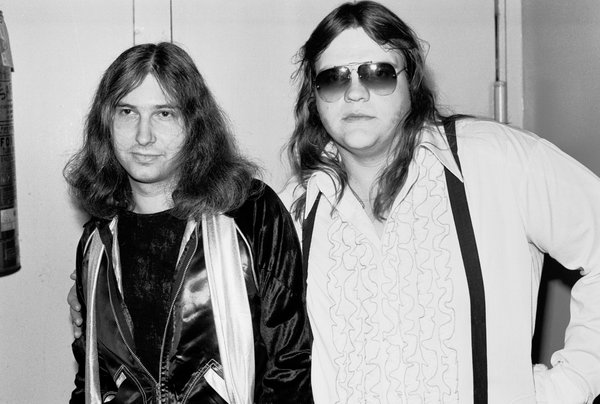 “Bat Out of Hell” became a mammoth success, selling millions of copies in the years that followed. Steinman and Meat Loaf were often estranged during this time, amid the pressure to produce a follow-up album, a brief period in which Meat Loaf lost his voice and a flurry of lawsuits over “Bat Out of Hell” royalties.

Finally, the two artists worked together again on a hit sequel, “Bat Out of Hell II: Back Into Hell,” released in 1993. Meat Loaf continued to include Steinman’s songs on his albums like “Bat Out of Hell III: The Monster Is Loose” (2006), even as the two men waged a legal tug-of-war over the trademark rights to “Bat Out of Hell.”

Those disputes have since been buried, they say now. Mr. Steinman said in his interview that Meat Loaf “was my greatest muse,” describing him as “a rock ’n’ roll giant with an operatic voice.”

The road was now cleared for a “Bat Out of Hell” musical. In 2012, Michael Cohl, the veteran rock promoter, came on as a producer, and helped to hire its director, Mr. Scheib, a professor of theater at the Massachusetts Institute of Technology who is better known for his experimental, mixed-media stagings of drama, opera and ballet.

Mr. Scheib said he was attracted to “Bat Out of Hell” specifically because of its reputation as an unstageable work. “I’ve inherited a lot of impossible projects in my career, so that part made a lot of sense to me,” he said.

He felt that the musical’s “ginormous” book, about a pack of eternally youthful teens who live underneath a mythical city called Obsidian, needed some reshaping and paring down. But he felt a familiar connection between Mr. Steinman’s text and his music.

“The songs were straight extensions of the scenes,” Mr. Scheib said, “and they felt like opera scenes.” Besides, he added, “What better metaphor for a broken heart than a crashed motorcycle?”

The show found an equally unlikely leading man in the floppy-haired Andrew Polec, who plays its unruly protagonist, Strat, and who rushed to try out for the project when he learned about it at an open casting call for “SpongeBob SquarePants: The Broadway Musical.”

Mr. Polec, who has been with the show since its original developmental lab in 2015, said he was introduced to the “Bat Out of Hell” songs in his teens, after he was injured in a bicycle accident and told he could no longer play contact sports.

The “Bat Out of Hell” musical made its official debut at the Manchester Opera House in the winter of 2017, then played in London and Toronto over the next two years.

Reviewing a performance at the London Coliseum, Ben Brantley wrote in The New York Times that it was “all loud and flashy enough” to make theatergoers “put aside their middle-aged blues to rock out in their black leather and bat T-shirts.”

But after a 19-city North American tour of the musical was announced in the summer of 2018, nearly all the dates were postponed or canceled, just days before the tour was set to begin. (The City Center performances, which run through Sept. 8, were unaffected.)

Mr. Cohl, the producer, has also been involved with other projects that were abruptly called off, like an all-star tour of “Jesus Christ Superstar” and an Off Broadway run of “A Night With Janis Joplin.” He was also a lead producer of “Spider-Man: Turn Off the Dark,” the notoriously costly and accident-plagued Broadway musical that was widely derided at its opening in 2011.

Mr. Cohl said that the “Bat Out of Hell” cancellations occurred after “a huge disagreement” with Bell Media, the Canadian company, which became a partner on the show in 2016. Mr. Cohl said that, at the last minute, Bell Media “decided they weren’t going to go forward” with the production, adding that “they were like a lot of people in showbiz — enthusiasm trumped their business sensibilities.”

A spokesman for Bell Media said in an email that the company “has met all financial commitments with respect to its investment in ‘Bat Out of Hell.’”

Asked how he coped with this latest cycle of near-death and rebirth, Mr. Steinman said: “I was built for disappointment. I never think things will work out in the short run. But I have a lot of stamina.”

A press representative for “Bat Out of Hell” said that a touring schedule beyond New York was “still under consideration.”

Ms. Hall, an unrepentant classic rock fan, said her was decision to be part of “Bat Out of Hell” was “just for me — I don’t care what anyone else thinks.”

“Not everything has to be some crazy chess move in your life or career,” she said. “This is one thing that really does fulfill that need for rock ’n’ roll, that need for being part of a family, that need for playing some wild character.”

Mr. Steinman was grateful that “Bat Out of Hell” had made it this far, blown gaskets and all. But after having lived with the material for so long, he was in no hurry to understand why it was so meaningful to him.

“I guess the songs might give a clue to something about me,” he said. “But I’ve never tried to figure out who Jim Steinman is. I’m pretty sure I’m better off not knowing.”

Though the songs of “Bat Out of Hell” are inextricably intertwined with his own repertoire, Meat Loaf said he felt only pride at seeing the show’s cast perform them in London. “Nobody will ever do it the way I do it,” he said. “It’s not a jealousy thing or an ego thing. It’s just do how I do things — people don’t do ‘em that way.”

Meat Loaf said he was also pleased that Mr. Steinman had fulfilled his longtime ambitions. “This was meant to be a musical,” he said. “I made it a rock show. Jimmy turned it around and made a musical. That’s what he wanted it to be.”

Dave Itzkoff is a culture reporter whose latest book, “Robin,” a biography of Robin Williams, was published in May. @ditzkoff