Donald Trump is certainly good for the publishing industry as another book about the former president has hit bookstores. Michael Wolff’s latest publication, Landslide: The Final Days of the Trump Presidency, tackles a topic many people would like answers to — his connection to Jeffery Epstein. 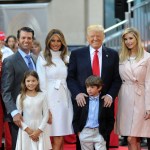 
These Trump Family Tell-All Books Are Impossible to Put Down

Now Trump isn’t the only high-profile figure who has some questionable ties to the now-deceased, convicted pedophile — yes, Bill Clinton and Prince Andrew still have some explaining to do — but the 45th president reportedly had some concerns about the information Ghislaine Maxwell had on him. According to Wolff, the issue came up at the end of his administration as pardons were being granted and he considered possibly giving one to Epstein’s ex-girlfriend. But as an alleged sex-trafficker who procured young girls and women for Epstein, a Maxwell pardon made the former president nervous about being somehow attached to the “sex-abuse scandal.”

“One ‘oh, s**t’ moment involved [Trump’s] sudden interest in Ghislaine Maxwell, the former girlfriend of Jeffrey Epstein now facing years in prison over allegations of her role in the Epstein sex-abuse scandal,” an expert reads, per People. “Trump had tried hard to downplay his own long relationship with Epstein.” With their friendship dating back to the late 1980s, Wolff’s book claims that the 45th president was outwardly anxious regarding any information Maxwell might have on him. The excerpt continues, “‘Has she said anything about me?’ [Trump] openly wondered. ‘Is she going to talk? Will she roll on anybody?’”

While Trump has not publicly commented on the allegations in the author’s book, his spokeswoman, Liz Harrington, made sure to tweet that “all these stories from the Michael Wolff book are not true” because “Wolff never asked President Trump about them, if he had, he would have refuted them. Fake News!” Wolff is contending that all stories were verified before publication. He responded on Twitter, “From LANDSLIDE: “The former president’s office has been supplied a detailed summary of …the material set forth in this book. His staff has either confirmed events…or disputed [matters] have been included only if confirmed by multiple sources.”

There hasn’t been much movement in the legal proceedings, but Maxwell is set to go to trial later this year. Once that court case officially begins, there are quite a few public figures who could be implicated by Maxwell. Does Trump have anything to worry about?

Click here to see Melania’s quotes about Donald Trump, from their marriage to the presidential race.