ST. LOUIS — The most disturbing moment in Verdi’s “Rigoletto” is the great monologue “Pari siamo.”

Rigoletto, a hunchbacked jester at the court of the Duke of Mantua, is approached at night by a mysterious man who says he’s an assassin for hire, should Rigoletto ever need such services. Left alone, Rigoletto grimly reflects that he, who wounds people with verbal barbs, and the assassin, who stabs them with a blade, are not that different.

At Opera Theater of St. Louis here recently, this aria came across with stunning immediacy, because Rigoletto (the baritone Roland Wood) sang the words with stinging crispness and brooding power in an English translation:

We are equals.
I the joker and he the murderer.
I kill a man with laughter, he with his dagger.

It was once common practice for opera librettos to be translated and performed in the language of the audience. That tradition was already losing sway even before supertitles were introduced and widely embraced. Now, the convenience of titling has made translating librettos for performance seem pointless, even stilted.

But it would be a great loss for the practice to disappear. Opera Theater of St. Louis remains one of a handful of companies (the English National Opera in London is another) dedicated to performing English translations. To hear two productions in St. Louis — “Rigoletto” and Monteverdi’s “The Coronation of Poppea,” both originally in Italian — in an intimate, 960-seat theater was to experience opera as it was intended to be: engrossing music drama, with an emphasis on the drama.

[Read our review of a new opera this summer in St. Louis.]

When “Rigoletto” was performed outside Italy during Verdi’s lifetime, he fully expected the libretto to be translated into the language of the listeners. Wagner wrote his own German librettos and considered himself as much a poet-dramatist as a composer.

Yet in an 1877 letter, replying to the news that “Lohengrin” had been performed in Melbourne, Australia, in an Italian translation, Wagner thanked the company but made a firm request: “I hope you will see to it that my works are performed in ‘English,’” he wrote, for only in this way can they “be intimately understood by English-speaking audiences.”

Titling systems are hardly a perfect alternative. For one thing, they’re distracting. Just at the moment when a singer enhances a lovely vocal turn with an expressive facial gesture, many in the audience may have their eyes fixed on a screen. And there is inevitably a loss of directness — the “intimacy” Wagner spoke of — when singers perform in a language not native to most in the audience, not to mention not native to many of the singers.

The main challenge of presenting an opera in translation is writing an effective one. Every sensitive opera composer tries to write vocal lines that are closely tied to the flow and rhythm of the words. To stay true to the shape of the original lines, translators must often sacrifice word-for-word precision in making something poetic in its own right.

But translation can be done well, as these Opera Theater performances proved.

Rigoletto’s torment and self-loathing in his soliloquy have seldom seemed so raw to me as when delivered in James Fenton’s excellent translation. The character hates what he’s become and lashes out at those who mock him and sneer at his disability.

“Society, cruel nature, you made me evil,” he sings in Mr. Fenton’s words. “It was all your doing. Every day, every night, playing the fool again. Not for me is the consolation of weeping.”

In this intriguing production, by Bruno Ravella, Rigoletto is a ventriloquist whose dummy gets away with spewing vitriol of which his handler can coyly claim innocence. Mr. Wood, a British baritone, brought Shakespearean depth to his performance and made every word matter. 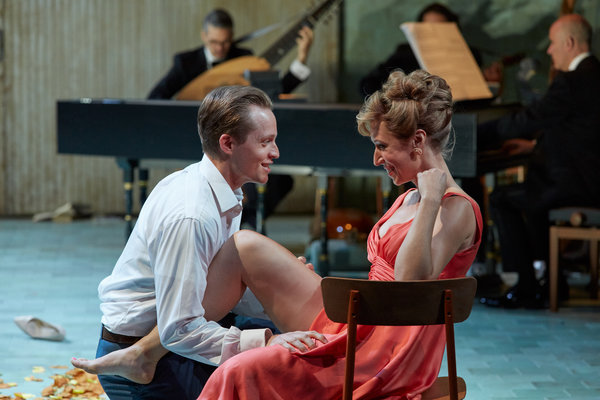 For his sexually seething, modern-dress production of “Poppea,” the director Tim Albery made his own translation of the libretto. The opera centers on the power-hungry Emperor Nero (Brenton Ryan, a youthful lyric tenor), who finally banishes his long-suffering wife Ottavia (the expressive mezzo-soprano Sarah Mesko) so he can marry his manipulative mistress Poppea (the alluring mezzo Emily Fons).

During one intense encounter, Nero explains his reasons for divorce to his former tutor Seneca (the bass-baritone David Pittsinger). Nero clams his imperial rights and asserts that the people will follow him; Seneca argues that with power comes great responsibility, that the law must be honored. Nero simply boasts that if “a law doesn’t suit me, I’ll abolish the old one and create another.” Finally, Nero goes low.

“Ottavia is totally frigid and infertile,” he says.

“When we know we are wrong, we look for excuses,” Seneca answers.

It may be that we’re conditioned to screens. Following complaints from patrons that it was hard to make out what they were hearing, even though the company has diction coaches who drill the casts in singing clearly, Opera Theater began to project the English words being sung in 2005.

There were a few moments during my visit to St. Louis, I admit, when I needed to glance at the screens for help. But not during “Poppea,” a work that has long stretches of recitative and arioso accompanied only by a continuo group, over which the singers could easily project. Rarely have I been to a performance where the audience seemed so riveted, with hardly any rustling or coughing. I’m convinced this resulted from being intimately close to an exciting young cast performing in everyday English.

Even episodes that typically seem lighter, almost comedic, in Italian, pulled you in anew, like an early scene when two sleep-deprived soldiers complain to each other about having to stand guard outside Poppea’s house while Nero spends the night.

“What makes it worse,” one says, is that Nero has raised taxes “to finance the excesses of his friends.” But they both agree they must keep quiet and trust no one, that in this dangerous world “you must treat everyone as a stranger.”

Comic relief, sure, but haunting in English.

The season continues through Sunday at the Loretto-Hilton Center; opera-stl.org. 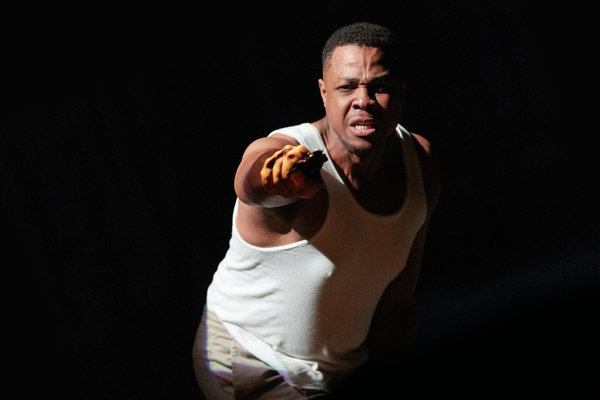 Anthony Tommasini is the chief classical music critic. He writes about orchestras, opera and diverse styles of contemporary music, and he reports regularly from major international festivals. A pianist, he holds a Doctorate of Musical Arts from Boston University. @TommasiniNYT